It's warm enough (and not buggy enough) now for me to strip down to my chef pants and do some barefoot yoga on the back porch during lunch break. I tried riding the kitchen bike today and got stuck in muck. Friends of a chef buddy of mine at da Toolik kitchen are dog sledding and bow hunting caribou. He keeps me up to date on how many they got and what the sledding conditions are like. The last I heard, it's mushy and they are starting to head back. If all goes well we may get our paws on a fresh hide and he's all for showing me how to salt, stretch and preserve the hide. Already dreaming up mittens and moccasins for my little one. It's nice to see gravel on the ground. I've been through three 'extreme' cold winters in three different parts of North America since January when I left Hawaii. I really didn't foresee following grandfather winter this far north, but eh, after the full year in Hawaii I assume this is a way of getting the seasons back into my blood. Here's to spring-time #3 of 2014.

Luckily, the boys that took off on a snow machine expedition to gather lake and ice core samples last week made it back in one piece. Any much longer out in the wild and they may have gotten stuck. Here's a link from the Fairbanks newspaper discussing their project 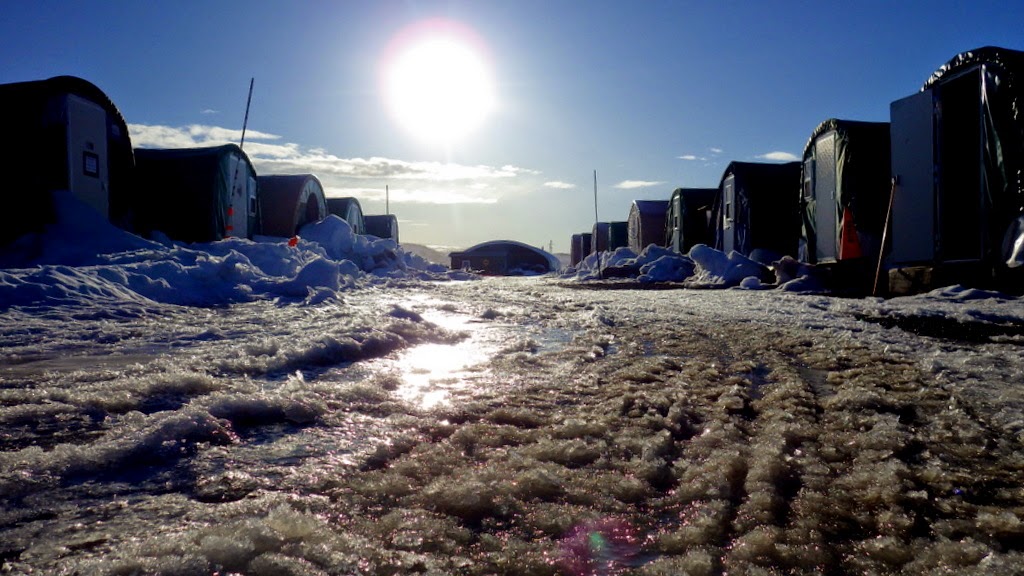 With spring-time comes flowers, fruits and squirrels. The little kitchen nursery is doing better. I replanted some celery tops today. 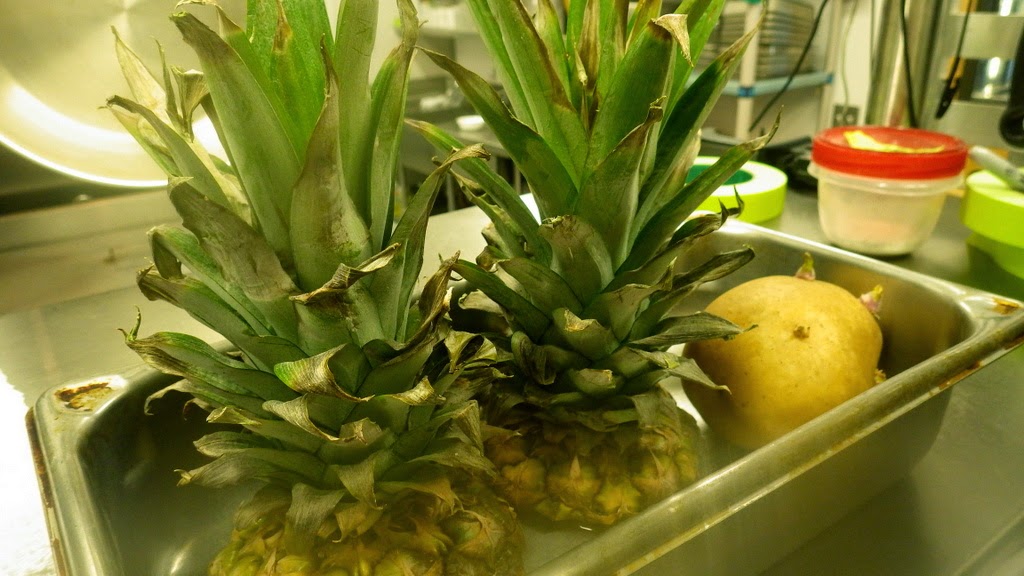 The Alaskan potatoes are having fun. 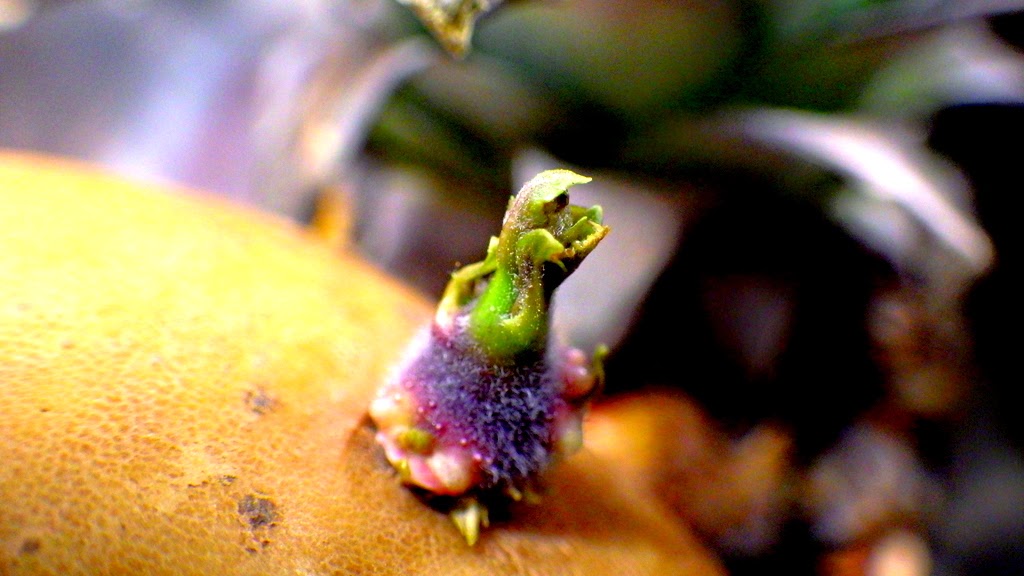 Been tossing in some Hawaiian flare here and there. Decadent macaroons. 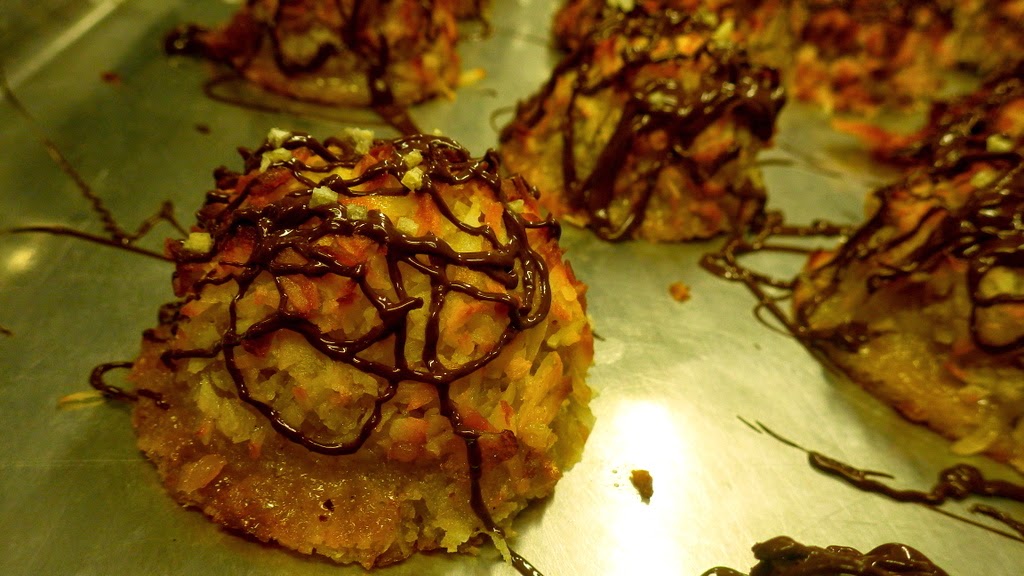 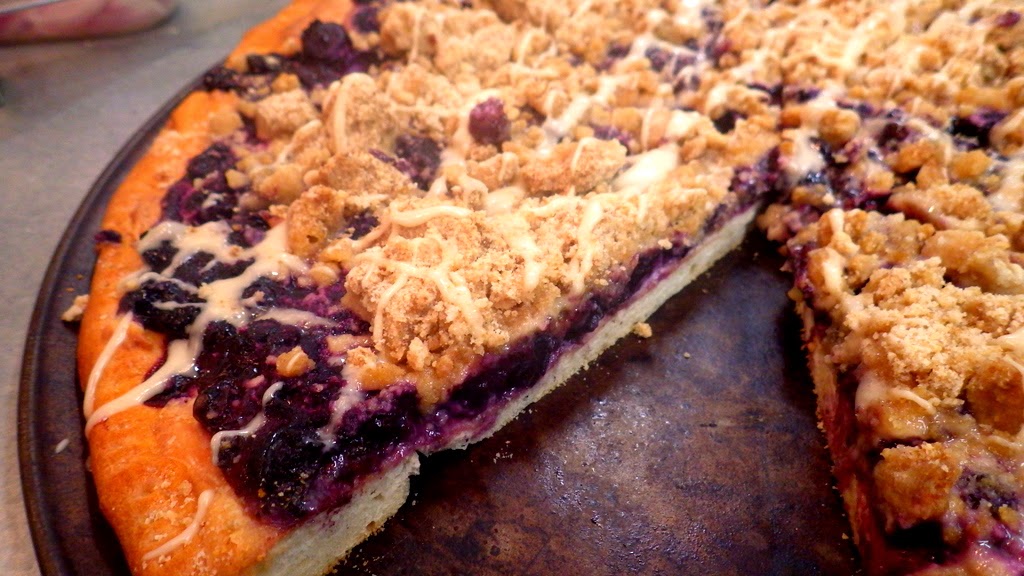 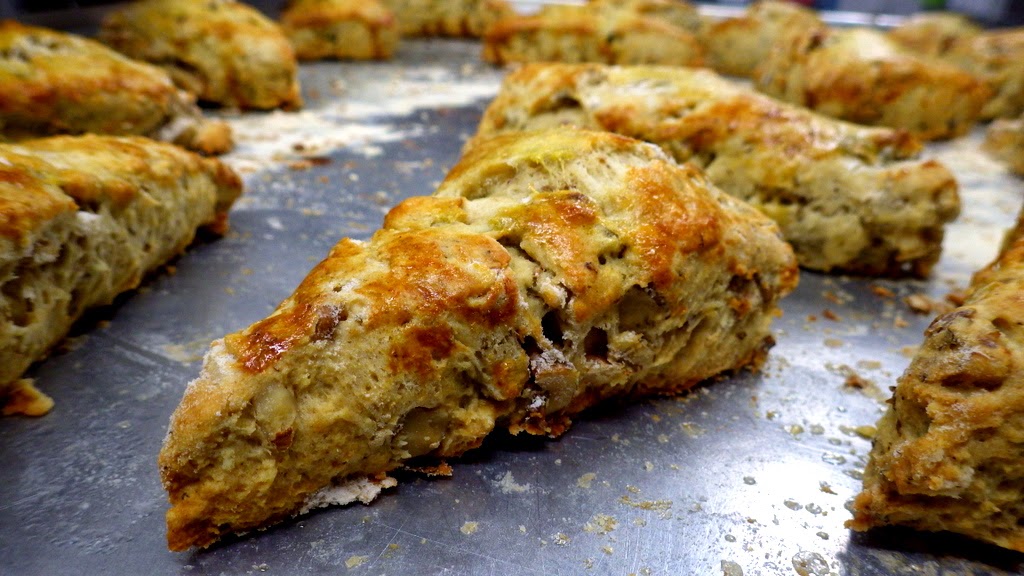 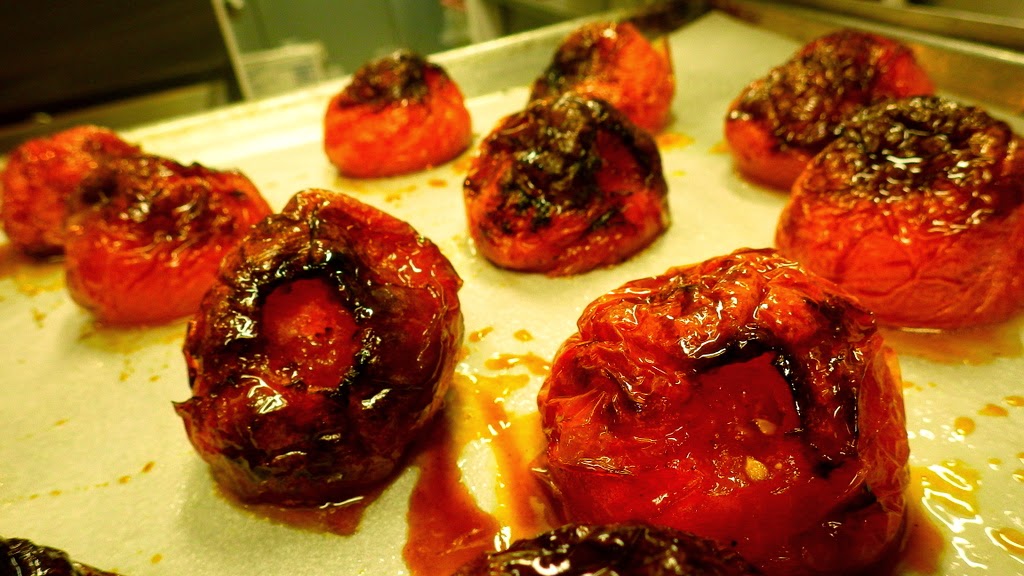 Home Skillet J used to manage KFC, he showed me the tricks of the Colonel... here's his JFC. It's rather simple. Dip chicken in water, strain and toss in seasoned flour and straight to the deep fryer. All these years I've been doing the egg dip method. Always something new to learn. 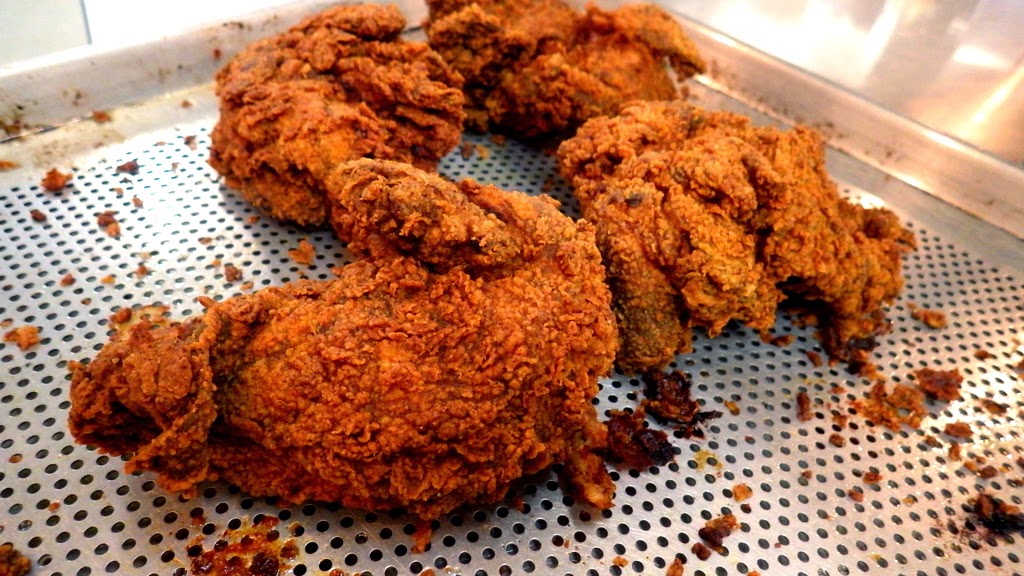 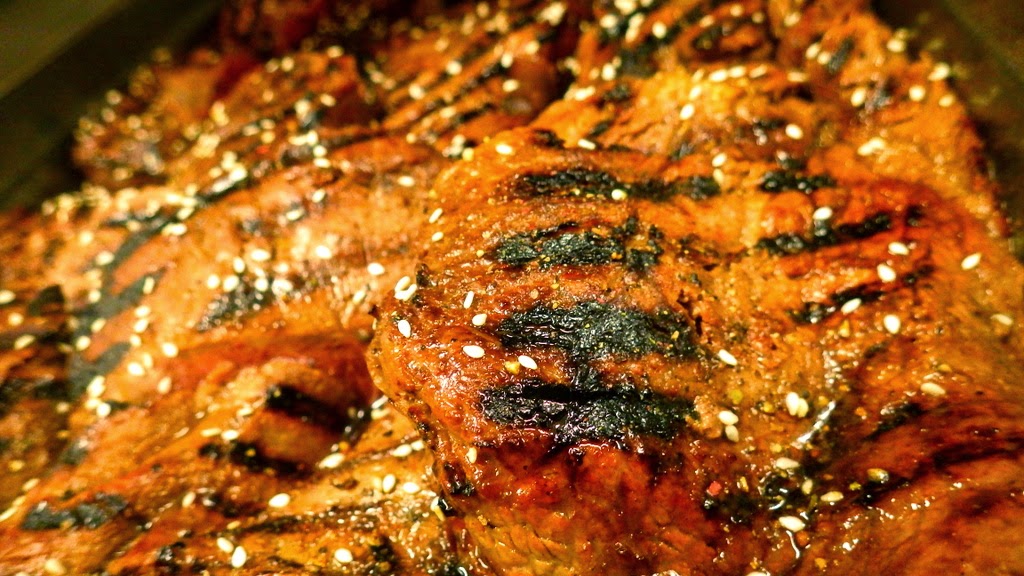 This is a topic that pertains to many kitchens around the globe and it's the wave of the future, unfortunately. 50% of the food in the food service industry is now processed and in many cases individually packaged. All the plastic that goes into this processing must be astonishing. The whole idea of 'scratch' cooking is being lost. I remember when I was a grill chef at a hockey arena in Canada and everything came out of a box pre-seasoned and went into/onto the fryer, grill or oven. No adulteration allowed. I felt like I was a professional box opener and not a cook. All of this is done to make things go quick and to eliminate food borne illnesses, but argg, where's the creativity at? And why is salmonella now being found on ready-to-eat foods that it never once was found on? The food stuff you see below we can at least season and cook however we want, but in terms of quality.. it is no where near the color and flavor of a fresh caught Ahi filet straight off the bone. Having witnessed the behind the scenes food creation on a farm I am second guessing the future of my chef career, in fact, I can firmly say that this is my last bout in this sort of cooking. If it isn't straight from the land or water and to the table, then I don't want or need it. I trust in nature that it has all we need to eat well. I'm going back to the land, baby. 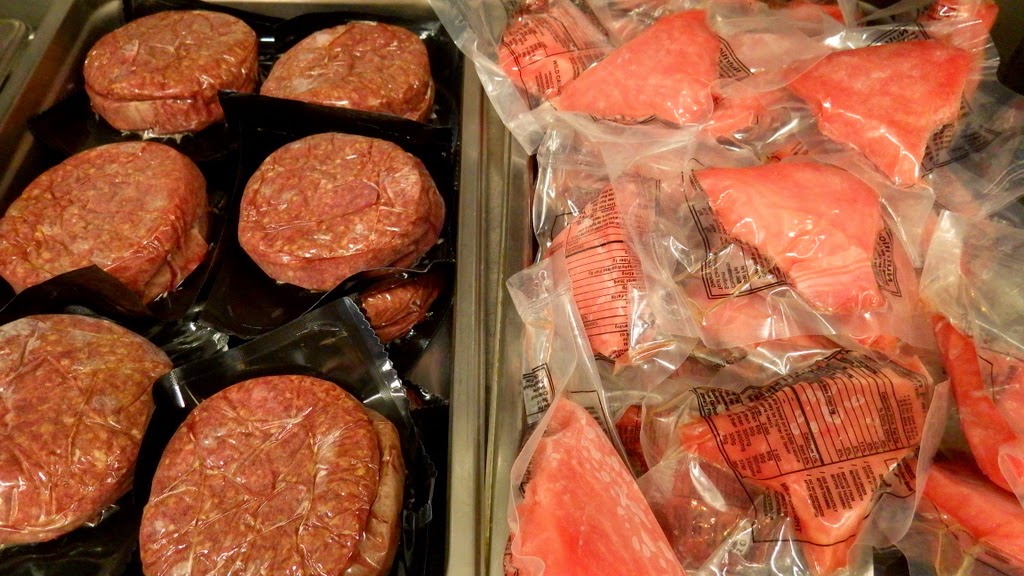 On the flip side, we do get some local food stuff, like amazing potatoes and giant leeks. I wish that we could offer locally hunted caribou and moose, but once again, the food quality control laws say we can only serve food from an approved vendor. Meaning, if we want to serve fresh Alaskan salmon, the salmon we serve has to go to Seattle, Washington to be processed and analyzed, then certified and sent back up. Do we take into account the fuel costs of all this food processing and shipping when putting a price tag on food? To serve wild meats we would have to buy from a caribou farmer that has a certified processing facility. So, one solution is create more farms and educate children to learn how to raise their own meals. Another solution is to educate consumers and the importance of buying locally and organic if possible. 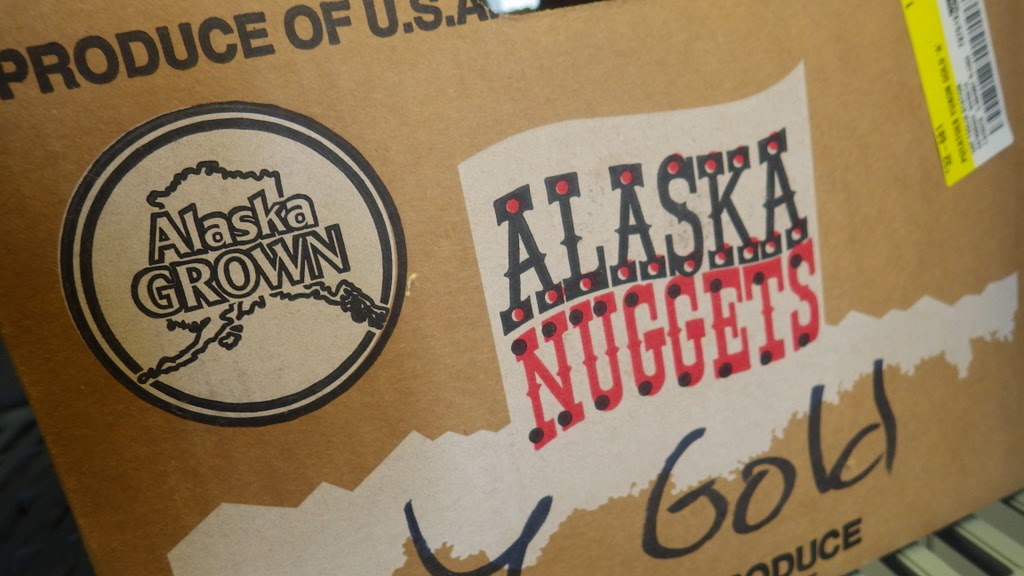 In the morning, bright eyed and bushy tailed I meander on the back porch with a dark coffee and hairbrush. The sky is always different. The land is ever changing, too. A week ago I saw the first squirrel, three days ago I saw the first fly and yesterday I was bit by the first mosquito. Only a matter of time before the mass of vampires arise from their waterbeds. 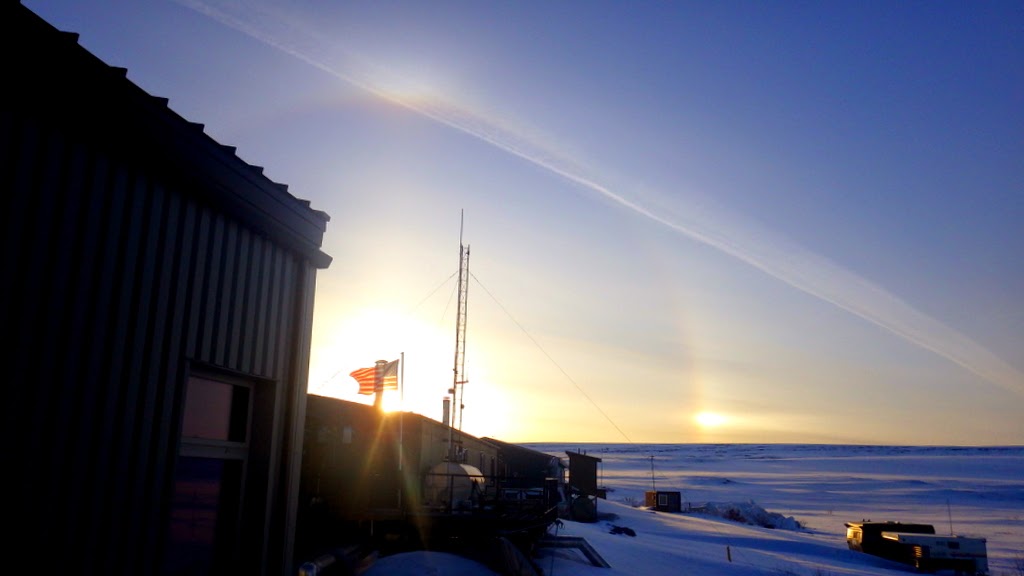 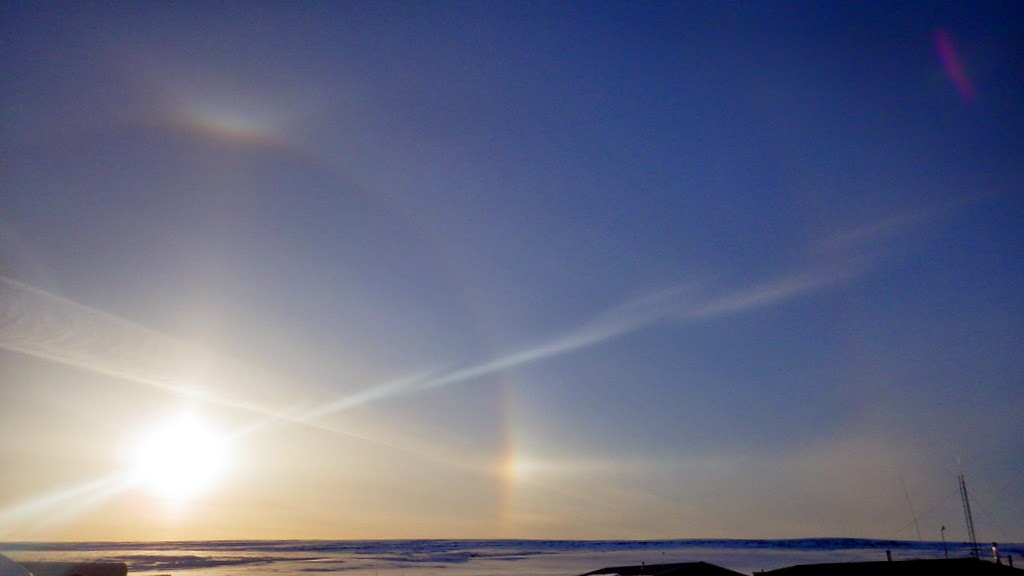 The Brooks range is lit up orange at sunrise.

One couple's idea of an Alaskan tundra paradise hotel.

The German's were out a few days ago filming squirrels coming out from beneath the snow. A couple guys from the BBC are also here doing the same thing. At breakfast we ask them what today brings and they go, oh nothing much just watching squirrels again. Wow, that is one cool job. 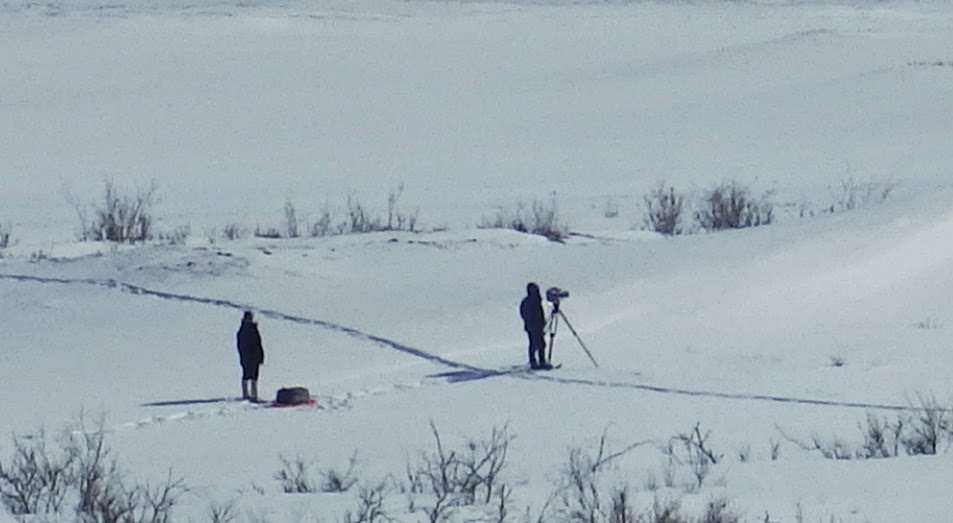 Another project going on here is with the Team Squirrel gang. They catch and tag squirrels and monitor them throughout the many years of their lives. One squirrel I met today was 12 years old. Some ideas I've come up with are: how do blood sucking insects like ticks and fleas, and stomach bacteria, react to the 'special' proteins in the blood that these squirrels have in order to freeze over winter and thaw? Does the long dormancy of squirrel life over winter promote a longer lifespan? My thought there was that if humans were frozen asleep for half of each year, would we double our life expectancy? 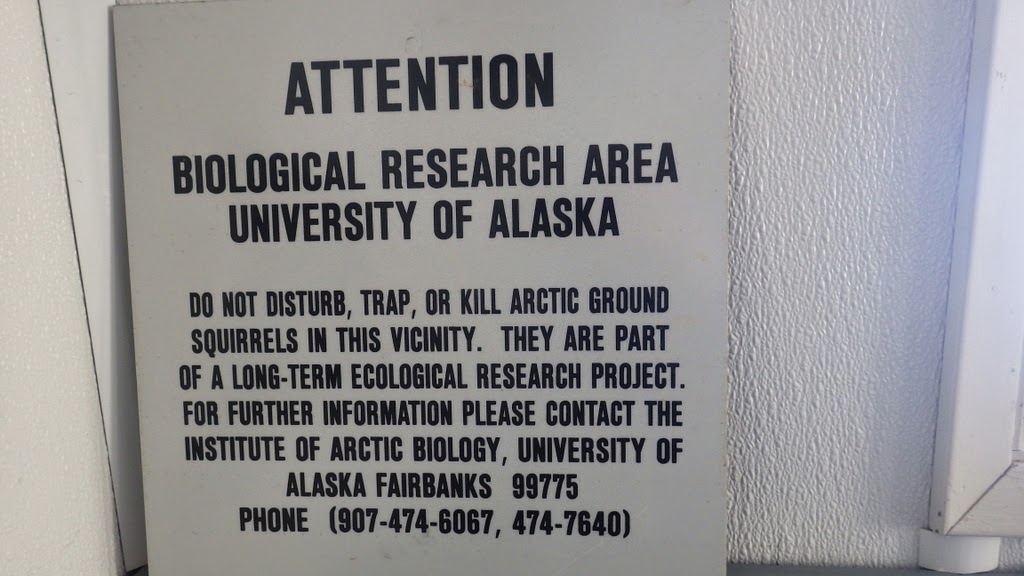 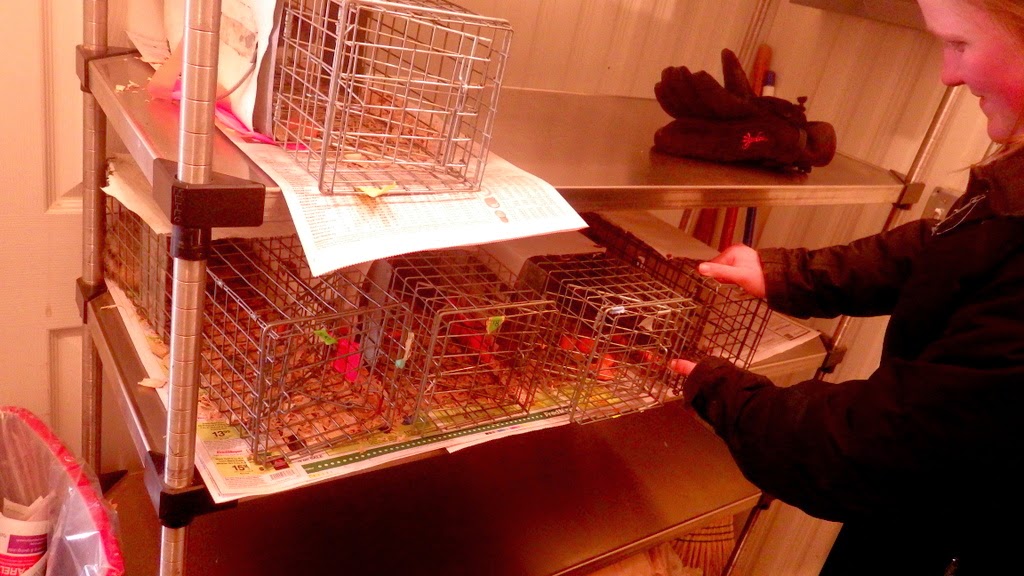 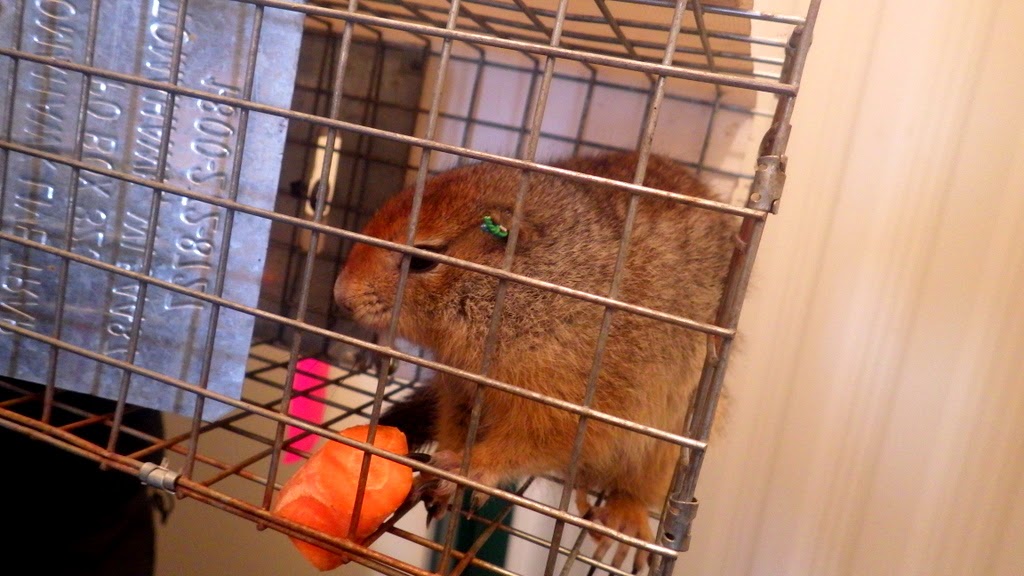 After a day of supporting all the science that goes in the Arctic everyone takes a break on a Saturday night to sweep some ball into the net under the midnight sun. 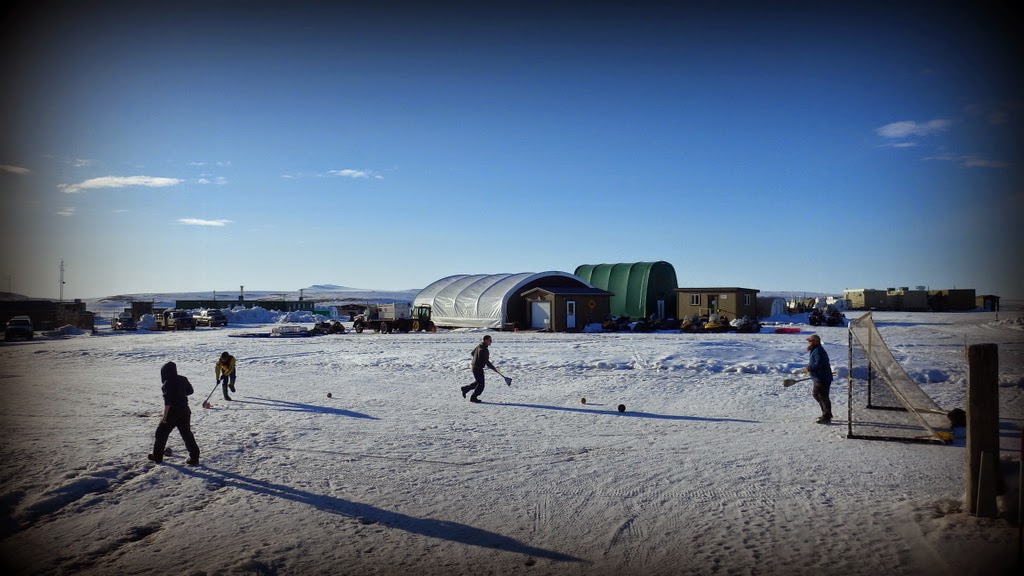 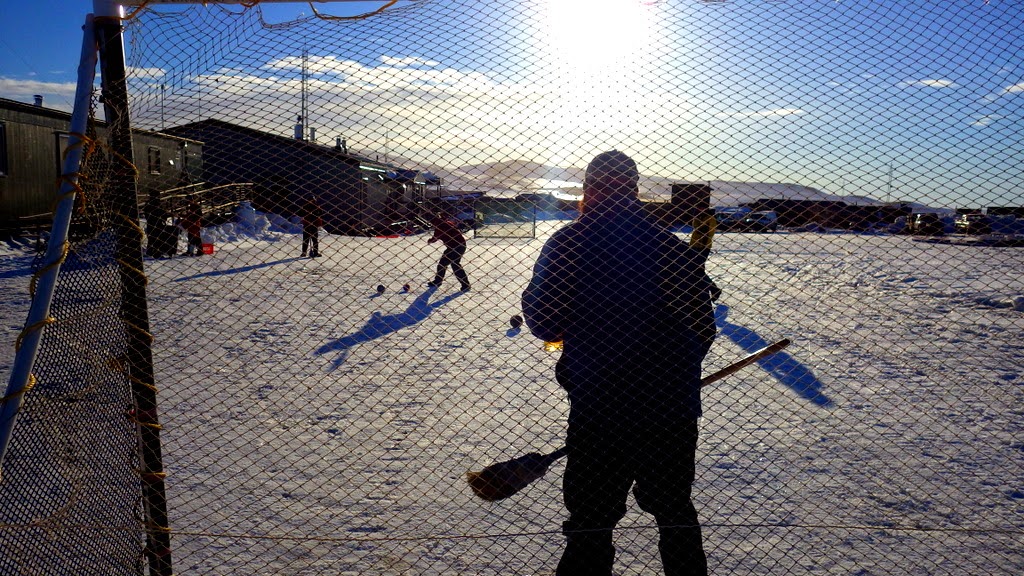 First thing tomorrow morning for me is to put the monster cinnamon rolls out with the cheese and fruit platters, do laundry and start packing for my trip back to Ontario :)
by Cody
Newer Post Older Post Home
codyleemeyer@gmail.com