Departing Antarctica to the Real World

I've heard rumors of Man Camp. Those rumors make me nervous each time I go to McM housing to get my key. 12 bunk beds, 24 men... ouch. Well, when I got back from WAIS at around 2 AM and went to housing I was given a packet with not a key, but a letter reading that I was bunked in Man Camp in Hotel Cal. Ouch. Too tired to argue against this decision I dragged my bags to the room and what did I find... 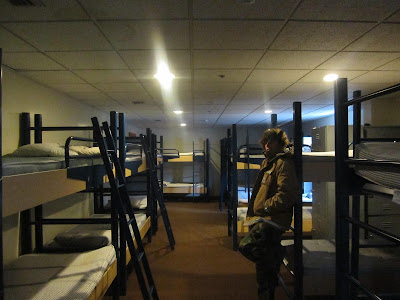 Not a soul. For over a week I was given the largest bedroom in Antarctica to myself. I don't want to boast about it, but I do want to thank whoever was behind this decision. It set a good vibe for my journey off the Ice. 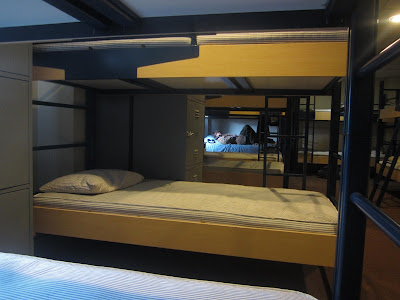 For my stint at McMurdo I did lots of debriefing and repacking. I learned all about the contract changeover and how McMurdo is going to get a sustainable facelift in the years to come since the NSF is looking to run green. I put a few applications in to cook at other remote stations/camps for 2013... and today I was asked by the South Pole Telescope cartel, whom put together the clearest picture of the CMB that shows remnants of early universe, to go back to Pole for the 2013 winter just so they could eat my pizza bagels for breakfast. It's amazing how powerful the memories of food can be. A day before my departure I did my bag drag. That's when you drop off your checked-in bags, get weighed, pick up your travel funds and show them that you still have a passport and big red. 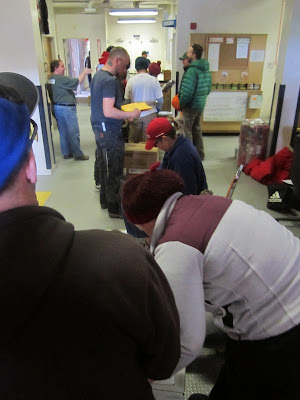 Most field camps have closed and reconvened at McM to do EOSs (end of season reports), evals, unpack and clean field gear. 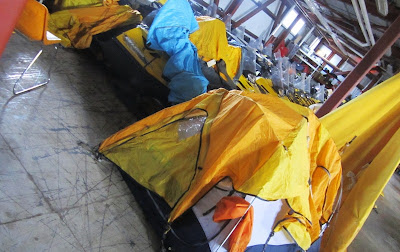 Outside, the ice in the sound is being broken up for the cargo ship and tanker to arrive. 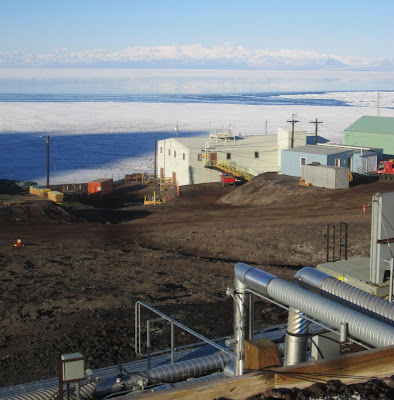 Plenty of whale action out there. The day I left I heard that a few penguins were in the vacinity too. 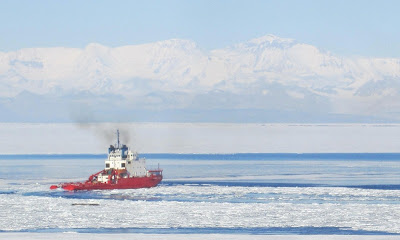 The snow machines destined to get tuned up before winter. 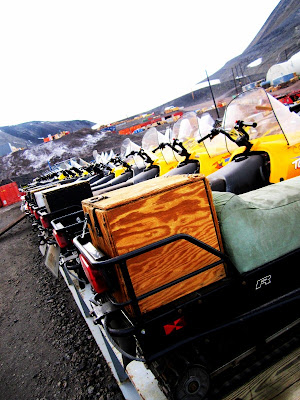 On the eve of the snow moon, February's full moon, it snowed. It also snowed plenty up north in places like Colorado. 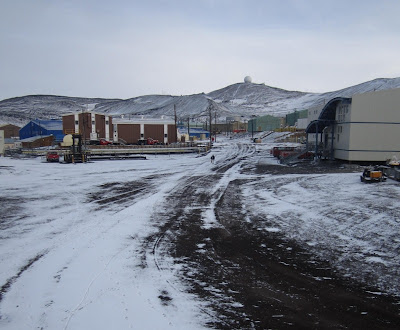 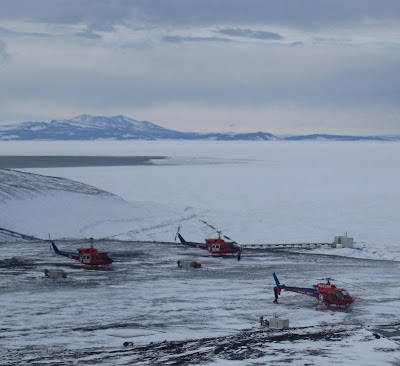 Night before I departed there were a number of parties. Each building had like it's own department party... so, if you wanted to see the carps go to Hotel Cal.... science support go to the science support building... FSTP team at BFC... field camps at Southern. 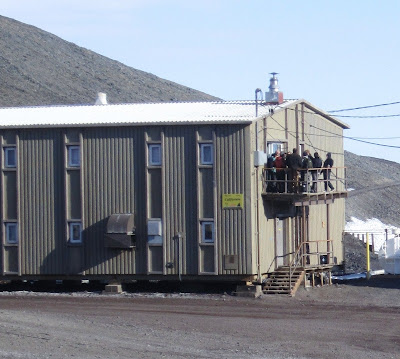 Next morning, off to building 140 to get on the truck to Pegasus, the C-17 runway. The same building where the post office is at and where we bag drag. 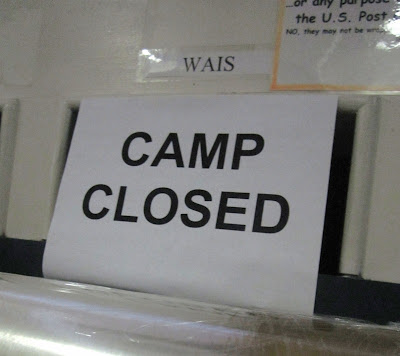 Waiting for the truck. 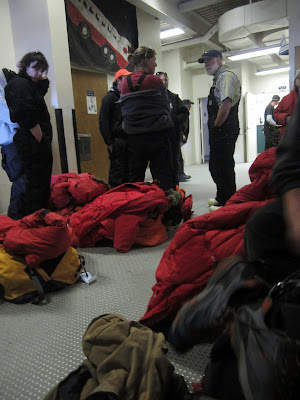 Sleeping on the long, bumpy ride. 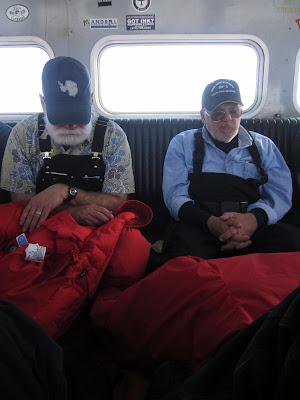 Waiting to get on the plane. 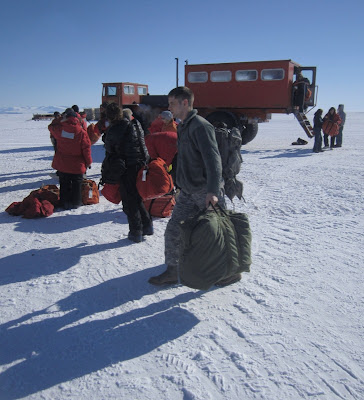 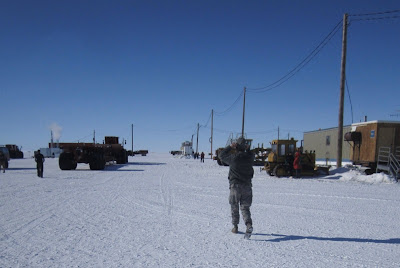 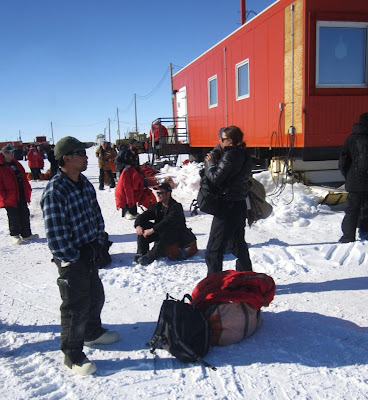 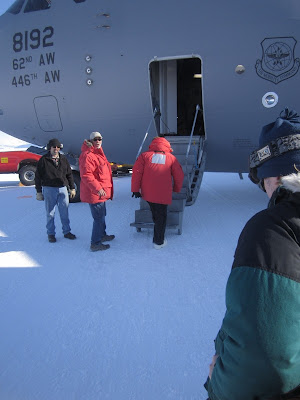 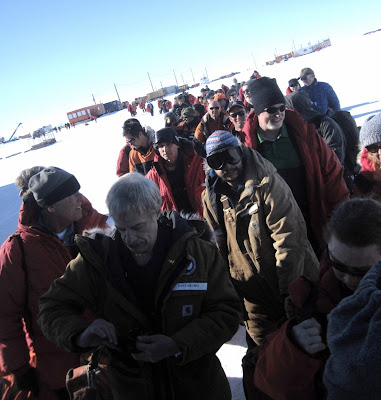 I sat next to the helium tanks that control the cryo unit of the South Pole telescope. 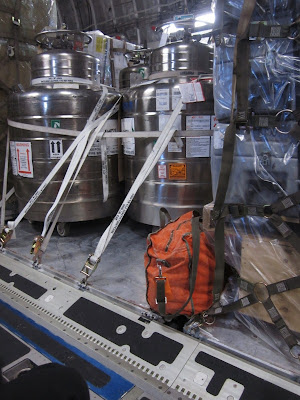 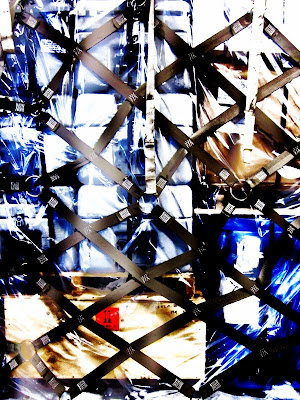 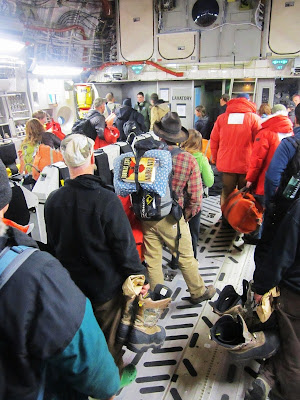 Full moon in the sky at the Antarctic Centre. Lovely. Hours later, laid down in bed. Started dreaming then was abruptly woken up to a rocking bed. By the time I jumped up, grabbed my bag and opened the door the shaking stoped. I read today that it was only a 5.3, nothing big, no damage, only felt. I don't know how big is big and how big it's gonna to be so I'm gonna be out that door ASAP homies. Welcome back to the real world; where things aren't just flat white ice, pizza and sun halos. 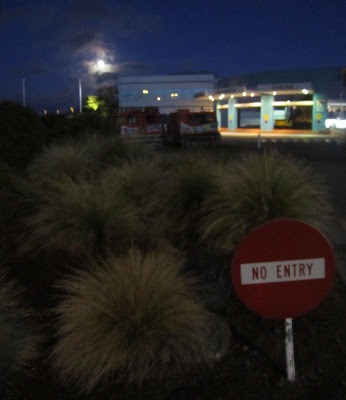