The holidays are over and WAIS is cruising into the final push for the 2011-2012 summer season. One month left before the camp is completely deserted; left in an abyss of ice and snow where it will be eventually buried by the elements until the following put-in crew arrives next October. In two weeks we begin the turnover as the carpenters arrive and scientist leave. The kitchen is anxiously awaiting a food cargo flight in... last week we ran out of all egg product, white sugar, brown sugar, powdered sugar and butter. Due to the lack of ingredients I am not just pulling the powdered sugar snow decorations off of the gingerbread houses, I am attempting to recreate them with what we do have. For instance, a lobster quiche. We have no eggs, so I mixed together heavy cream, flour, salt and a hint of turmeric to give it that yellow color. We have no sugar, so I have been reducing all the fruit juice from the canned fruits and today I'm going to bring the reduction up to the brittle stage and see if I can break it up in the food processor back into it's natural sugar. Fruity sugar and coconut cream in your hazelnut coffee? Maybe?

More people are catching on to the snow wall fad. Some have had to dig their tents up and relocate entirely. If I didn't have the snow wall I think that my tent would be 6-feet under. One problem with individual snow walls is that the walls create drifts behind them as you can see in the pic below. We are taught at the snow course at McMurdo to build one giant wall around all the tent.

The WAIS emergency response team has been training lots this month. No injuries here this season. I've heard rumors of a boat catching on fire and sinking elsewhere off the coast of Antarctica sometime in the last couple days. The Ice is hard on the mind and the elements here are unforgiving, after many months in one location a person has to keep busy, in various fields, in order to not fall into a cycle of complacency. Cross-training between departments keeps the minds and bodies of camp interactive and focused.

Here's the team getting a mock unconscious victim off the snow, into the sled and then to medical for treatment. 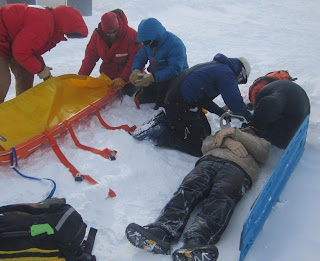 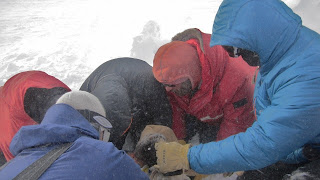 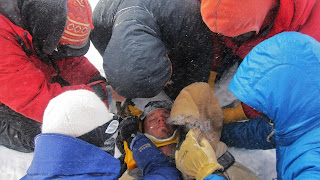 Fully packaged and strapped to the sled. 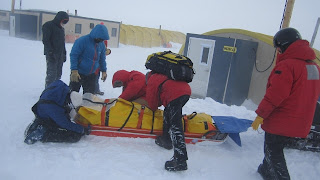 The ambulance driver is ready to ski. 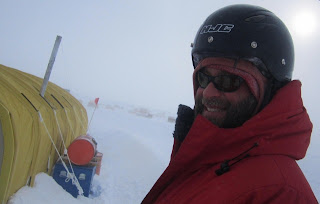 And there they go, off to medical.

Without the key ingredients to cooking I've had to step over the whole breakfast box and broaden my appetite. We have tons of cheese. 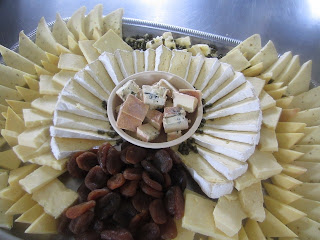 A prune and cream cheese coffee cake. The shell is composed of a soft on the inside and hard on the out cinnamon roll dough that's been spiked with lemon zest. For the filling I spread vanilla cream cheese down then topped it with a prune, almond, brown sugar and margarine mix. 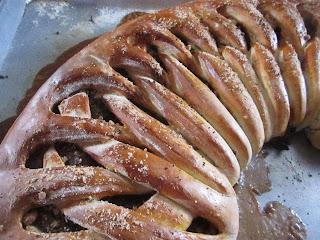 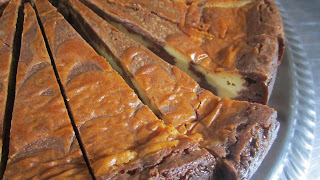 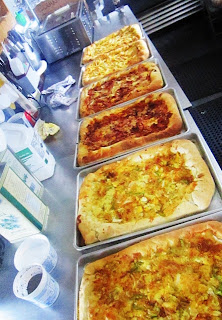 Brie and smoked salmon stuffed crust pizza... for the sauce I used a canned holandaise mix and salsa. Almost stuffed the crust with bacon. 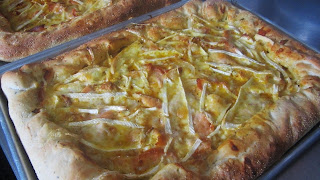 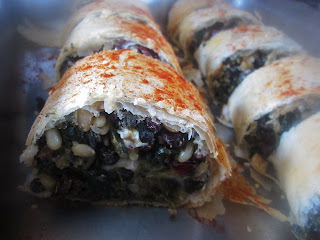 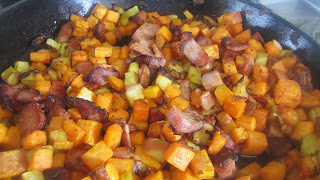 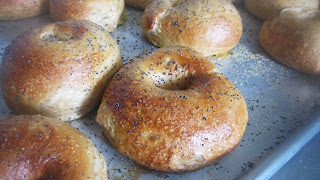 Cody's breakfast- apple cinnamon bread and a cup of coffee... 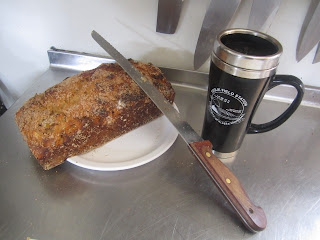 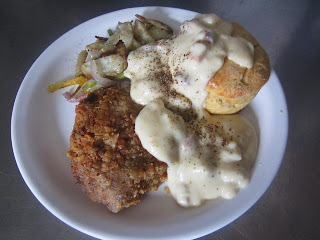 With only a few weeks left before I can start stripping down to bathing suit and flip flops I started up my kung fu-stylin' boxing boot camp workout routine as to begin the toning process. 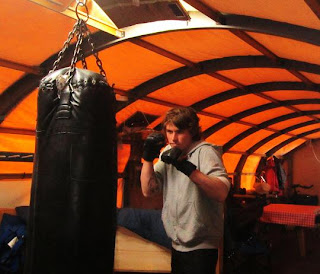 Kung Pow! No soup for you! 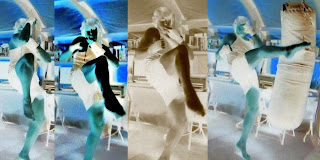 Here's a lyric from one of the outhouses. The way it usually works is one person writes a short and simple sentence, then days later it progresses in different penmanship. While doing your business you can read scripture, hip hop lyrics, stories of drillers and things I can't mention here. Be sure to carry a permanent marker with you to the outhouse and leave your mark, if you know what I mean. 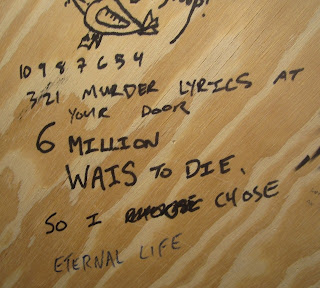