Last week I checked our break schedule and realized I would only have one more opportunity to vacation before heading to Ohio then Antarctica, and decided to go kayak the Na Pali Coast of Kauai, Hawaii... this weekend. Spur of the moment, yeah. I visited the North Shore of Kauai almost a year ago and loved the scenery. Now I want to get a better feel of it by kayaking the 16-mile west coastline. Some of the beaches are part of the Na Pali Coast State Wilderness Park and only accessible by boat/kayak and a permit is necessary to camp on those beaches. After spending a week looking for a reasonable resort room, studio, cottage, hotel, motel, trailer... I was empty handed due to it being the Labor Day weekend. Luckily, a couple nights ago I found that there are camping permits left on one of the remote beaches that allows camping available until the park closes on Sept. 7th. Good timing. Tis cheaper to rent a car, kayak and campsite on a world reknown beach escape vs. spending the night behind walls.

I've been studying the trip nonstop over the last 48 hours and am confident this will be another one of those experiences of a lifetime. Hanalei beach (point of kayak pick-up) is ranked the #1 beach in all of Hawaii by several key sources and the Na Pali Coast has been honored as one of the best kayaking expeditions by National Geographic. Sea turtles, dramatic cliff scenes, taro, isolated pristine beaches, native burial grounds... what more could one ask for?

I've focused my attention on earthquake activity in the Aleutian Island Chain of Alaska where the North American plate rubs against the Pacific plate. There was a nice quake (7.1) yesterday, and a few aftershocks, but nothing signaling a tsunami threat. Once again, confident that this will be a successful trip. If something were to happen I'm sure the US Coast Guard would fly over with audible tsunami warning or at the least I would pick-up on sudden tide changes and make way to high elevation with my survival gear. Updates at www.iris.edu/seismon > 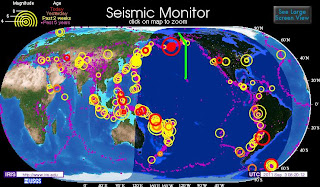 Yesterday I finished up fresh strawberry pancakes, blueberry bread pudding, meat and bean chilis for the brat lunch, and a wicked southern honey BBQ chicken for dinner then packed up all my goods. 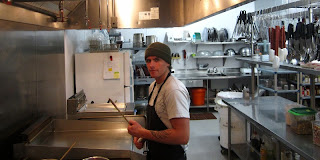 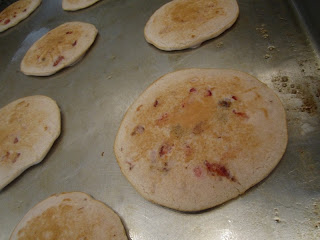 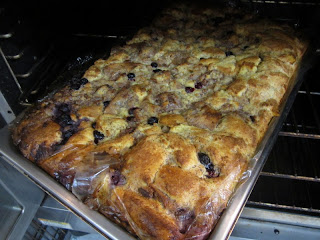 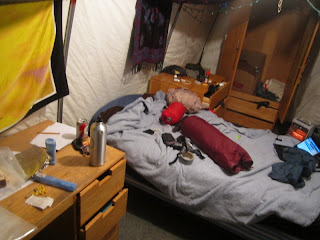 This morning at 8 AM I departed southbound on the Haul Road with Toolikans leaving the station for good for this summer season. They talked of it being their time to leave and feeling burntout of the Toolik experience for this summer, but for me, now is the time to shine. When I get back in a week there will be about 30 people and come Sept. 15th even less than that to feed. This is the best time of the season for me. I can play moreso in the kitchen and explore the chilly tundra. I have only 4 more weeks before I start up another 4-month summer contract in Antarctica and am going to soak up all the chill time in the Arctic to download energy for that adventure. 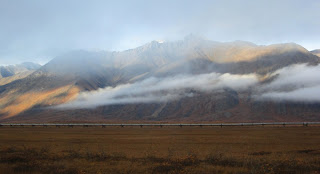 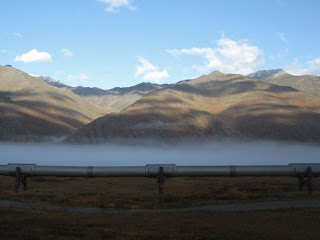 The fireweed has gone from orange to red to purple to almost brown and now all that's left if the far north is a reddish-tan tundra. 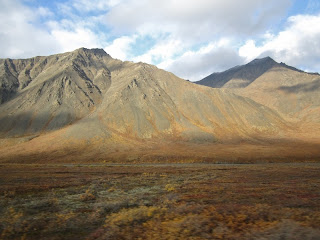 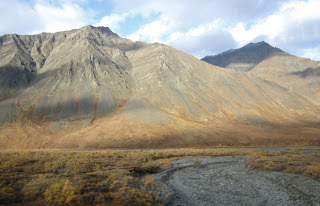 A few miles downward from the Brooks there are trees. Oh, tress. One fellow in the truck mentioned how much he missed seeing trees. Try living in Antarctica for a year ;) 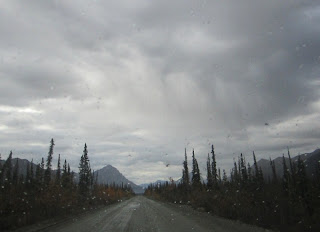 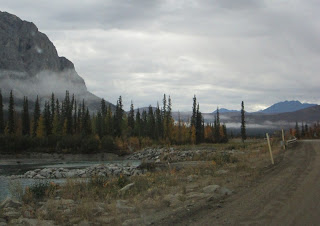 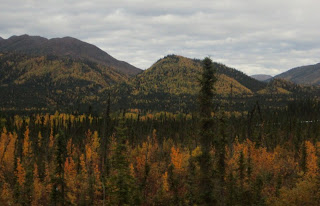 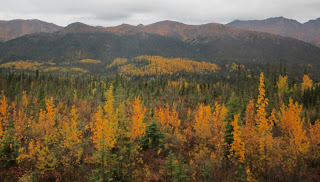 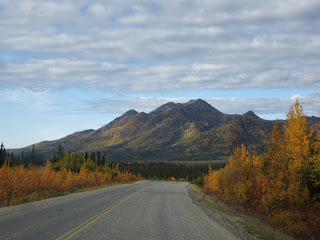 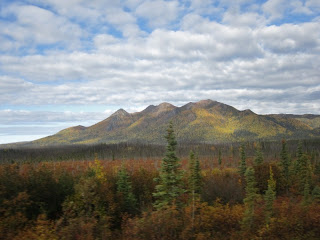 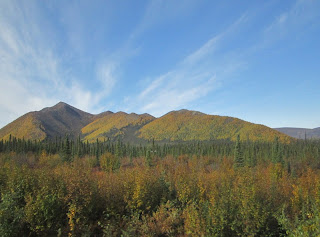 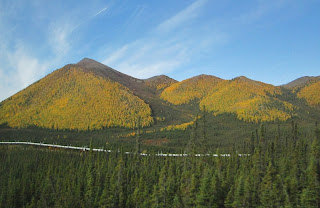 Further south some of the vegetation was a little redder. But, it still appears that fall is nearing it's end and soon snow will be on the way. 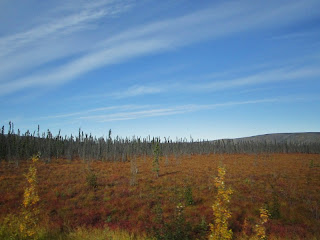 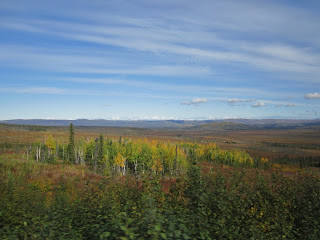 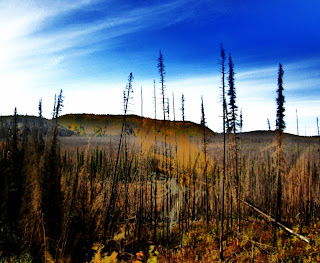 Once we reached Fairbanks I was dropped off at the Fred Meyers where I picked up some food for my trip. While trying to shove the food in my freebee Sierra Club duffle the zipper broke. No problema. The Value Village thrift shop was just a 10-minute walk away and I bought a well-used black duffle for a few bucks... plus picked up a light rain coat in case it get's wet in Hawaii. 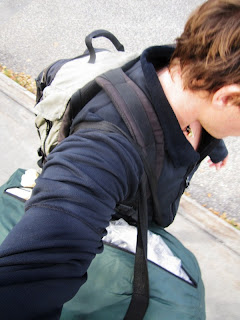 I repacked my bags on the side of a busy street next to a tree where a homeless dude was napping underneath. Sleeping under a tree is more holy than sleeping in thin walls of plastic (tent) under a tree... if the beach that I'm going to is kind and the weather nice I will just sleep on it and not set up tent. 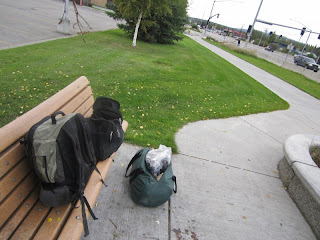 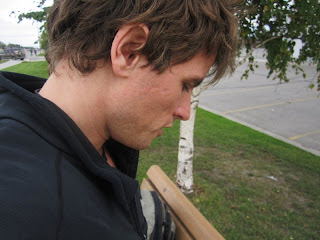 Flying to Anchorage where I have a 20-hour layover. 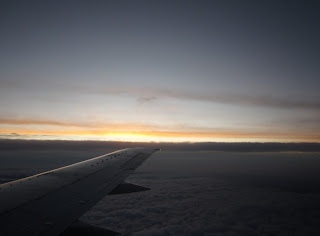 Once in Anchorage I found out that all the hotels were booked for the weekend or way too expensive. Found a cheap motel room at an RV park where I could stage til I depart to Hawaii tomorrow. I've packed and unpacked my gear several times just to get the feel of what I'm carrying. The only thing missing is fruit, kayak and a beach. 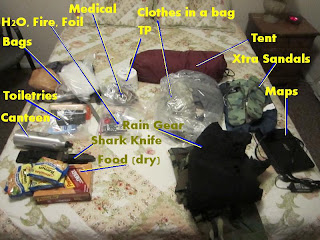