The harvest moon was a few days ago and I have been so busy in the kitchen that I haven't had much time to do anything else besides cook, workout, nap, cook, sleep and dream. Crazy dreams may I add; this morning I dreamt I was in Kauai mapping out a snorkeling route for a young mother and her boy, I remember bits of the snorkeling and it was reminiscent of a heavenly underwater world in the tropics on some alien planet. Yesterday, I dreamt I was being chased by some thieves in a van, I stopped at a canoe rental store and when I got out I saw a small metallic green duck in the bush. Within a second it morphed into a metallic silver snake with an arrow-shaped head and jumped at me. It wrapped around my right foot inside my shoe, so I took the shoe off, grabbed the snake and threw it into the grass. Problem solved. Why all these crazy dreams all of a sudden? I haven't done anything except think about the culinary arts and blueberries all day and hmm... maybe that's the root cause of all this subconscious backwash. Dream-time is free-time > no deadline, recipe or procedure.

I have 13 days left to please the last of the Toolik users and staff. All the summer cooks are gone and I'm the last one standing it feels like. Breakfast, lunch and dinner - 30 some people to feed -main meat entree, main vegetarian entree, soup, sides, desserts, smoothies and possibly candies in the near future. I could sit back and do the whole pull out of box and bake deal to get some down time (that's pretty much what lunch is for), but I'd rather take the bull on by it's horns and proceed with culinary inquiry and perfection, if such a thing exists. Where was I again? Oh yeah, the harvest moon. 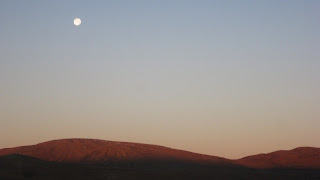 I'm the first one awake on station and it feels like I'm the old man that gets up before the crack of dawn to sip coffee and watch the sun rise before the kids wake to grab their cereal and head to school. I walk to the kitchen in darkness, half awake, wondering if I will ever run into a bear or wolf. Everything besides the rocky road is iced up, so I walk slowly on the decks and entrance to the kitchen. I reckon it's cold, below freezing, but I'm never awake enough to really register it. Some mornings it's foggy, others snowy, and every once in a while there's a loon calling in the distance. It feels like a ghost town inside and out. When I get into the kitchen I turn on a couple lights and classical, get the coffee going, do the late night leftover dishes and slowly my brain starts mapping out a schedule for the next 14 hours of cooking.

This morning I walked in at 5 AM and saw written on the board, "effluent on tundra, yum." 99.9% of people would probably giggle and walk on, but no, not me, I'm very inquisitive about such a thing. The idea of manmade wasterwater flowing into the northern Alaska wild from mining and drilling camps stuck like peanut butter to the roof of my mouth. Science (i.e., UAF) helps explain what's going on in the wild and wilderness stakeholders (i.e., ASP) and conservationalists (i.e., ACF) do what they can to invest in protection, but the spread of development and resource use is inevitable. There's no end to exploitation just as to there's no foreseen decrease to our world's human population growth rate.

The bigger a cow grows the more grass it needs to graze on and the bigger it's defecation is. Karma would have it that the larger area of fallen manure would offer a larger fertilized ground for a mushroom to grow on, but, the increased methane gas release associated with the output of the manure would add to the global greenhouse gas flux thus adding to global warming which will, possibly, lead to the desertification of the field where that cow grazed and squat thus disabling the potential growth of the mushroom, grass and cow. Choked out and famished by excessive growth. Hypothetical, yet also valid in some paradigms of contemporary enviornmental modeling and furthermore, climate change.

A few weeks ago toolikans were picking blueberries in the tundra. It was great; humans having fun nibbling on the fruits of nature just like any bear would. Fresh, clean, straight-from-the-earth, sustainable-count harvested and un-engineered. A wild backyard ingredient for jam, pies, crisps, muffins, smoothies and more. Funny how according to NSF (National Sanitary Foundation) guideliness I cannot use wild blueberries in the production kitchen. There's a slight chance they could be seasoned with effluent and unsafe for human consumption since they were not grown and handled under FDA standards. Which are what for blueberries? Toolik science says there's a lot to study here. Toolikans love the local bluberries. And down the road a 100-man camp operated by Black Gold Oilfield Services is in the making to harvest that sweet old black gold and pump it into tanks which are lined by something (?) to prevent any spillovers into the tundraland. That story is here.

I came to Toolik in hope to see polar bears in some remote Arctic tundraland and instead followed a dusty road filled with tankers, 18-wheelers and camo caribou bow-hunters, all adjacent to the 400-mile long oil pipeline that's the spinal cord to the Alaskan economy. Interesting, yes. Watching the caribou jog through the tundra away from the hunters and under the pipeline reassures me that nature will always find a way to cope, after all, this state is huge and I've only seen a small part of it on the Haul Road. There's still lots of protected land I hope that the pursuit of black gold doesn't go too far beyond the few miles of the pipeline nor too close to Toolik as to endanger this beauty, these tastes. 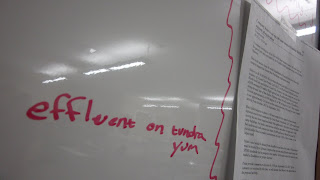 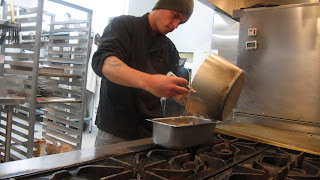 Breakfast comes and goes like the evening Pacific trade winds in Hawaii and then it starts to snow. 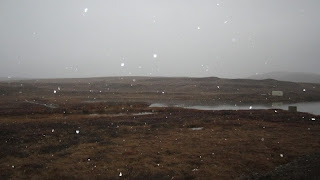 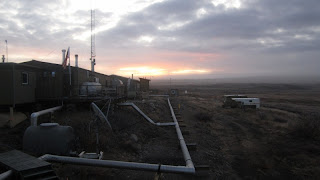 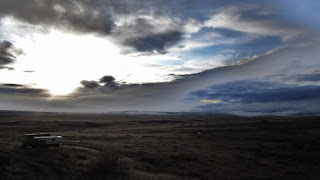 With the station population way down I get to play more in the kitchen. Fried chicken - soaked in buttermilk overnight, breaded with a mesh of corn flakes and potato chips, deep fried then finished in the oven. 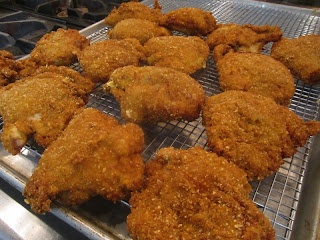 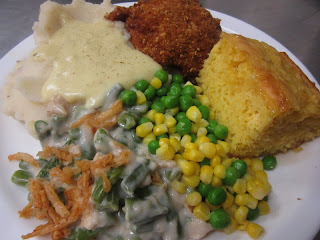 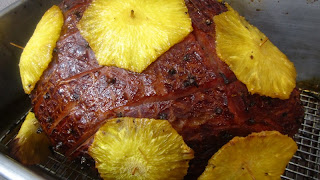 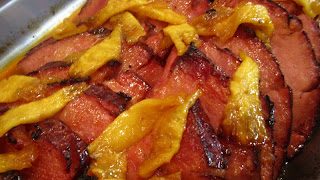 Some of the hardest cooking challenges are the simplest of dishes. How to make risotta melt in your mouth without that super mushy texture? Add the liquids slowly and stir often. I babysat this batch for over a half hour until the starch was prime al dente. 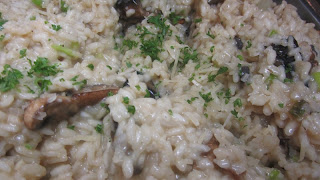 Baked steak fries... when to pull from heat? How to hold? Very timely and like with any other fry it's most crispy time is right when it's pulled. 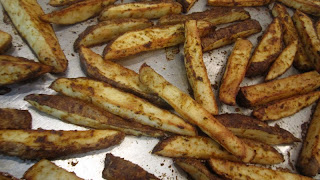 All summer we've been doing pizza with frozen prefab crusts and this time around I figured why not start from flour and yeast. In Pamama I developed a method by which I could do the rise to double and then freeze quickly as to keep the dough for another day. I made the dough yesterday and froze it. It has to be thawed super slow and played with before the glutens relax, but the time invested is worth it because the crust comes out super amazing. 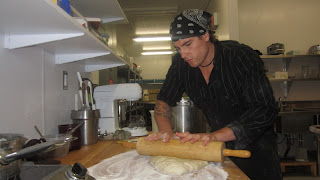 While all the rising and proofing is going on I made some quicky mini mapple-pecan muffins for breakfast. 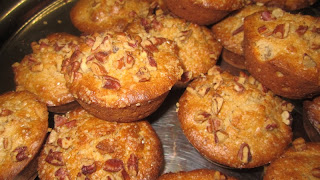 Country wheat dinner rolls I made the day before for steak dinner. The leftover rolls were frozen and saved for the hungry winterover crew. 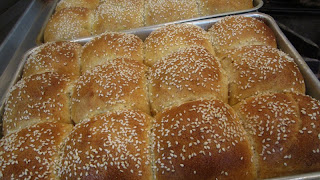 Back to tonight's pizza... I shaped and poked and lathered the crust with garlic butter, then topped and baked at 450. Came out really dank. Especially the super veg. pizza which had fresh sweet basil and tomato slices. Great pizza toppings > whole basil leaves, sliced tomatoes, thinly sliced potatoes, chunks of brie cheese, pesto, BBQ chicken and if you really want to get crazy ask me about dessert pizzas. 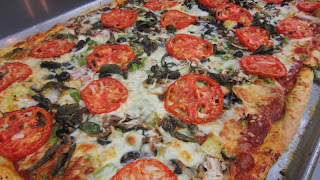 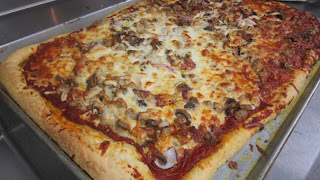 Now for the exquisite hit from last week. The maple glazed AK salmon with candied walnuts and apples, topped with a tangy cherry sauce and lemon thyme. I did this 6 days ago and folks are still talking about it. 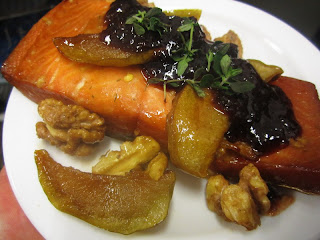 This is what dinner in the dining rooms looks like now. One big happy toolikan table. 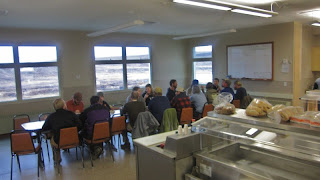 One last bit before I sign off, some guests from the Arctic National Wildlife Refuge came by a couple weeks ago and were looking for comments in regards to the long-term planning agenda for the refuge. Their website is here. You can make a difference by commenting on their proposed Comprehensive Conservation Plan. If only we, black gold miners and environmental scientists, hunters and lodge owners, the whole nine + nine yards, could all get to one giant happy table, and set pace in a civil, open session. Then again maybe this is the wave of the future > determining the fate of the wild blueberries with an online statement. My commentary > expand the wildlife refuge boundaries and no mining allowed. To harvest or not to harvest, that is the question. 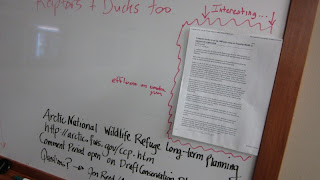