Several people have asked me if I'm living at the geographic/true/physical North Pole with Santa Clause... and the answer is no. I'm about 1,500 miles away from the true North Pole and I hate to break it to ya kids, but in the last few years the central parts of Arctic ocean have been ice-free, meaning that the Santa dude, like the polar bears, is having to find refuge elsewhere. The true North Pole is roughly 14,000 feet below sea level, and I find it interesting that the true South Pole is about 10,000 feet below ice level. Both of our geographic poles are under miles of water and ice. The map below comes from Google Earth and shows Toolik camp in relation to the North Pole, the red line measures 1,444 miles, but is only a rough measurement. Here's another interesting fact - the geomagnetic North Pole has drifted more in the last two decades than it has in more than 400 years. The geomagnetic pole is where the compass needle points and helps the positioning recognition of some migratory animals and birds. Geomagnetic field models and real-time measurements indicate that the Earth's magnetic field is weakening, which can accompany a magnetic reversal and separate the dipole into a number of poles, as we are beginning to see. You can find more information about this here at NOAA's Wandering of the Geogmagnetic Pole website. A full reversal is likely to take more than a 1,000 years to complete, but given our current velocity of geomagnetic pole migration, can it happen much sooner? How does a weak magnetic field interact with solar radiation storms? Once again, the answer is... there's not enough data, information about the Earth's dynamo. Below is a map from the NOAA website, with proper citation below it, showing the geomagnetic pole positions since the early 1800's. Note the large drift from 2001 - 2007 and compare it to 1831 - 1948, roughly the same distance, but a large temporal change. 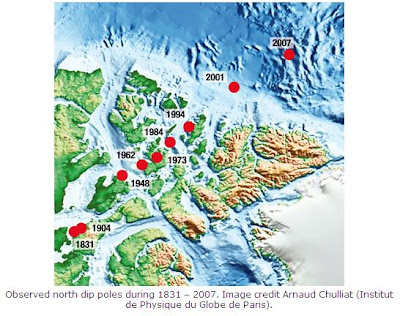 Here's another cool map that I derived from the same website and tweaked. Now, compare 1600 - 1900, and 1900 - 2010. Huge spatial change in the last couple decades. One question that I have is how accurate are the measurements prior to, let's say, the beginning of the computer, technology boom in the 1970's ? 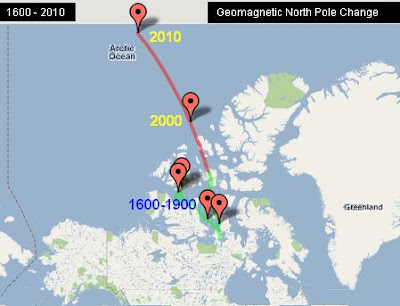 So there you have it kids, Santa Clause hangs with Spongebob and Ariel under the sea in the summer and the Earth's geomagnetic poles are moving quickly, which will play havoc on communication and GPS if it doesn't slow. I probably could have just said that no, I'm not living at the North Pole, but that'd be too simple (:
by Cody
Newer Post Older Post Home
codyleemeyer@gmail.com