Three days before every full moon I have vivid dreams and prior to this recent moon (Feb. 18) I had a dream about solar flares creating earthquakes.

While at Trent University, Canada, in 2008 I studied (inside and outside my curriculum) the impacts of solar activity on our climate, satellites and power systems. The 2012-2013 solar maximum is approaching and once again I'm digging through cosmoclimatological oriented scholarly papers to piece together the relationship between the earth and sun. Science pertaining to the sun intriques me, perhaps the reason why it is forever imbedded in my subconscious and revealed in dreams. For many months, if not years, my train-of-thought has been narrowed to the kitchen and culinary processes for the sake of income and traveling the world, but there's... more or less... a raven tapping at my shoulder. Why is it that I am where I am and do what I do? What is unfolding here boys and girls? 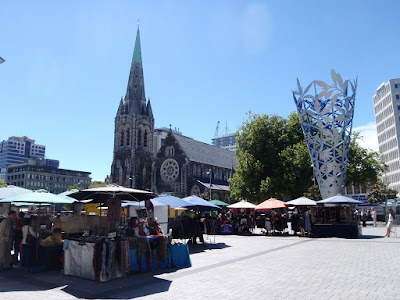 ^ I took this photo 3 months ago while standing in the center of Christchurch right after I left the South Pole. An earthquake struck in September of 2010 and when I left the Ice in early November I was curious to see what became of the buildings and the catherdral was still there. The post where I got this pic is called 'from icebergs to earthquakes'...

A few days after my dream we had a series of intense solar flares brush the earth and an earthquake yesterday in New Zealand that brought the Christchurch catherdral to near ruins. I'm not going to be like my Grandfather and say that one caused the other ;), but I am going to propose a hypothesis that I think needs to be further studied.

When I hear folks talk of the transformations of 2012 they often refer to the poles flipping. Now, I have spent quite some time at the polar regions, primarily in the South and have had the lucky chance to mingle with polar scientists studying the climate, sun and in general, the entire universe and the creation of it. I learn directly from the field scientists and don't need to refer to a classroom to get the knowledge I seek, in return they get some good food. But, let me get back to the poles flipping... what is a polar flip?

Radioactive isotopes derived from ice core samples from the polar regions indicate geomagnetic reversals are common throughout earth's history and we haven't had one for 780,000 years and based on the graphs it looks like we are due for one. In fact, the geomagnetic poles are on the move and this will have an impact on compasses and navigation in the future. A geomagnetic reversal is not a physical flip of the earth, but are they correlated in any way? Are geomagnetic reverals triggered by another cosmic phenomenon, i.e., change in solar output and polarity? The puzzle in front of me is that of an invisible (geomagnetic) world, and a physical world, i.e., plate movement.

Okay, so back to my dreams to tie up my story here... in my dream I saw the sun spitting flares at the earth, the earth's colourful radiation belts bouncing around, the core of the earth spiralling and altering it's movement in accordance to the overall change in the earth's energy field. Change of terrestrial aura due to input of UV+ electromagnetic streams coming from the sun. Furthermore, I saw the earth's tectonic plates like the scales of a lizard... originating from molten molecules within, moving outwards, migrating along the body, etc. But, different than a lizard's scales the plates on earth were colliding and more interestingly the plates were being formed from a chaotic core of magma that was reacting to magnetic state of the local solar system. Changes in geomagnetism led to fluxes in core rotation and process, thus changes in the location and velocity of orogeny and subduction... thus tectonic movement... and finally, earthquakes. Mountains rising from the sun's energy... now that's a thought.

Although a dream, it was a very deep one and something I am going to look further into because more often than not my dreams are filled with meaning and accuracy. Instead of looking at the themes and mythology of the characters in the dreams I will have to look at science, because there were no characters. I don't even feel like saying it was a dream, what if it was just an reawakening and I was able to feel/see/visualize the unseen world, the world the Haudenosaunee's believe belongs to the 'transformers'... the earthly spirits of mountain building... the phenomenon geomorphology call orogeny that was somehow connected to geomagnetic interactions between the earth and sun.

I believe that if there is electromagnetic instability on a global scale than there will be physical instability; and maybe social instability, but I steer away from that idea for now because human geography was never my thing... we're just dust in the wind. I think it was one of the Marinist Brothers at my high school who taught me that the first thing that occurs before civilizations collapse is civil unrest (riots, protests, wars, hunger, etc.). Mountains on the other hand... contain the stories of the sun and the earth's core because they are the longterm residents that live between both forces of creation. So now once again I must tie together geomorphology, climatology, cosmology, geology, etc. Put science together and what do you get? A breath of the universe.

Well, I am now in Bocas del Toro taking a one night vacation and buying some groceries for this upcomming weekend rush of guests. One of the girls sitting next to me in the WiFi room is from New Zealand and she is wearing a very sad face, time for me to go see what's up in the world while not at tranquil Gilligan's Island. Just remember that no matter what happens out there, inside, below and above everything is radiate. Welcome to purgatory... remember to just ride to wave of destiny and adapt to whatever the universe sets in front of you.