After Friday's sunset I made my way to a local Panamanian joint where I was fed a giant plateful of chicken and rice for 3 bucks. After my belly was mucho lleno I retreated to my room to get a shower and chill out a bit. Around 9 PM the streets started to become lively. The Guard guys were marking their territory at Gringo bars that were playing primarily American tunes like remixes of Pink Floyd, and the locals were scattered amongst the town riding bikes, hanging in the park, talking on pay phones, eating chicken and making their way to the beachfront bars playing Central American dance music. At the start of the night one chick came to streets with her fire lit hula hoop and hypnotized the onlookers. 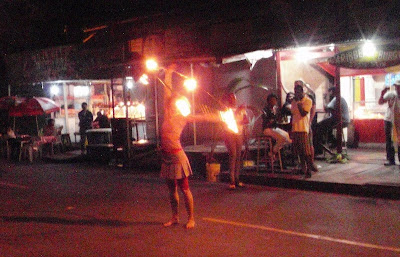 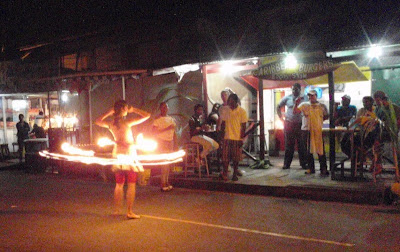 When the fire dancer was extinguished I hopped to the streets, making peace with the locals... speaking a bit of their gansta slang, and watched how this island's many cultures were intertwined. By talking with the locals I learned everything about what impact the tourists are having upon the native culture. At the end of the night I found myself having an intelligent discussion with a software programmer from Spain about the future of food and water resources around the world. We came to the conclusion that it's one thing to be a consumer and consume just because that's the way your parents raised you and that's what your culture relies upon for economic and social 'success'... and totally another thing to step outside the box, stop consuming and ask ourselves... how much do we need? when will it run out? and how will we feed our children in the coming decades? 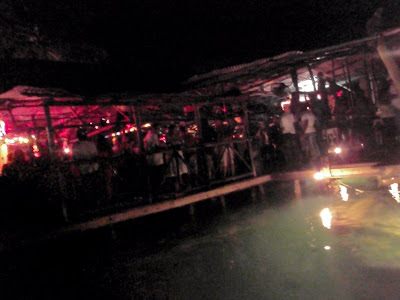 Bocas del Toro has been entertaining, but I miss Gilligan's island already and will be heading back there shortly once I pick up a few more groceries. On the island there is no ruckus in the streets, loud parties, police, cars, drama... it is tranquil and quiet. A more placid way of life and that's what I am after.