Polies are flown to ~10,000 feet from sea level (McMurdo Station) in a matter of 5 hours. Prior to one's departure to the South Pole a Doc at MacTown will give you Diamox, which is a high altitude medicine that increases your respiration so that your body can metabolize more oxygen. Below is a comparison of altitude gains between two different groups... Nepal trekers and Polies. What the Nepal trekers do is rise in altitude slowly, allowing their bodies to adjust naturally over the course of a few days. This is the norm for most mountain hikers. Unless you're on a traverse, Polies don't have the slow ascent option. We are flown to high altitude in a short time and it's important that the South Pole trauma squad has backup procedures in case high altitude illnesses, like AMS, HACE, and HAPE arise. Note: the bottom axis is days. 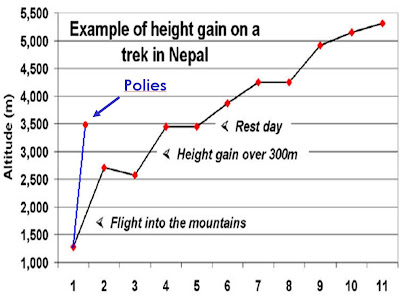 Within your body there are specific concentrations of chemicals and gases that create pressure balances such that things like blood stay inside your arteries. At the South Pole the air is less dense than that of sea level. The oxygen concentration of the air is the same, 21%, but there are fewer molecules overall because the air is more spread out. That means each breath here captures 30-35% less oxygen than we would catch at sea level. What does this do to my body? 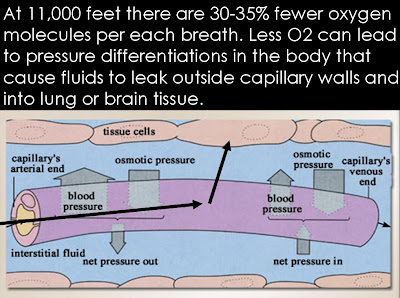 Well, assuming that our bodies are working properly our red blood cell counts will rise, i.e. hemoglobin... a protein that transports oxygen throughout the body, will be produced more. Tribes living in high Nepal have been shown to have relatively high concentrations of hemoglobin. Some tribal members also chew coca leaves, a plant whose medicinal effects increase heart rate and respiration. Since there is less oxygen to be sucked in at high altitude the body and mind comes up with a more efficient means of transporting those few oxygen molecules throughout the bloodstream; increased respiration and high red blood cell counts.

When I hook up a Pulse Ox Oximeter (a device that measures oxygen concentrations in the blood) to my finger it registers around 91. Docs at sea level would be somewhat worried about these numbers given that at sea level your pulse ox is at min. 97. They would diagnose me with hypoxia for sure.

So... I have less oxygen in my blood and I'm still doing just fine; completing at least 9 hours of kitchen duty, working out in the gym a few hours every other day, and shoveling away snow castles with ease. In the beginning my body had trouble doing the same load of exercise as I would do at sea level. My breathing became deeper and faster. Now I can do the same load, if not more (due to the high red blood cell count). In addition to all of this memory loss kicks in after a few months. The brain is getting less oxygen and the parts of the brain that deal with cardiopulmonary (breathing and heart) processes are put on high demand, whereas those parts of the brain that deal with digestion and memory are not so important. Awesome dude, we get toasty... life get's funnier... and my body gets used to less oxygen by increasing hemoglobin and focusing on the more important life functions. The longer I stay here the more I become a South Pole mountain yeti, cousin of the North Pole polar bear.

I've done the math and at 10,500 feet it takes 35 days for full hematological adaptation. I mean really, most of us who came here in February did undergo a week or two of headache, nausea, insomnia and crankiness; the basic signs of acute mountain sickness (AMS). Some still have these problems. The worst case scenerio for someone who is flown to Pole and cannot adapt is their body fails under the lack of oxygen. Pressure balances break down and fluids begin to leak outside capillary walls into the lungs and/or the brain, high altitude pulmonary edema (HAPE) and/or high altitude cerebral edema, respectively. When HAPE occurs fluid fills the lungs and less oxygen can be absorbed... furthering the illness. HACE is when the brain fills with liquid and if untreated death is right around the corner. How to treat AMS, HAPE, and HACE? Either descend in altitude or breathe 100% oxygen. As you know we cannot physically descend in altitude since the South Pole is on lock-down until mid-October, but we can imitate it via a portable hyperbaric chamber called the Gamow bag. 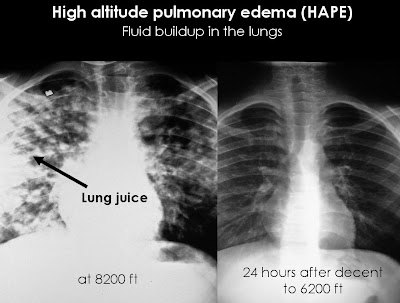 For the advanced trauma team we decided to practice with the Gamow bag and I volunteered to be the victim, like always. The bag is completely sealable and with a compressor the air inside is pressurized to ambient pressures so that the victim's body is allowed to function at conditions found at lower altitudes. In our case I was being brought down 5,500 feet to roughly 5,000 feet in altitude. Every year this bag is used in real emergencies. First I climbed in... with a Pulse Ox Oximeter and thermometer. 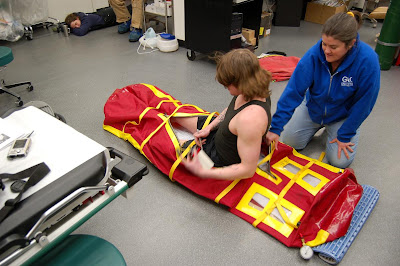 They zipped me up. 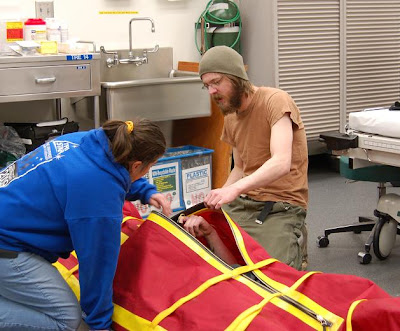 Would Could Matt Lee pumped it until I was at 5,000 feet in altitude with respect to the enclosed ambient pressure. It's important to go slowly on ascension and descension otherwise it plays havoc with your sinuses and ear canals. I had to pop my ears several times on the way 'down'. 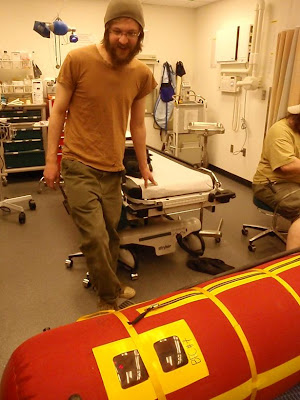 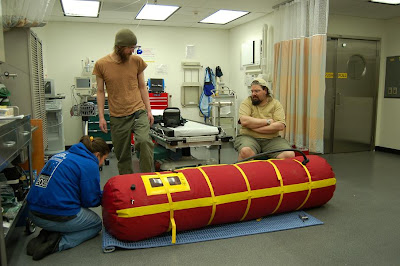 After several minutes my pulse ox ramped up to 97, then baselined around 99. Success... I was breathing in normal air... it was hot and I could feel humidity, oh the sexy sweat, how I've missed you... my memory came back... it was like being in heaven. Breathing was like it was 7 months ago. 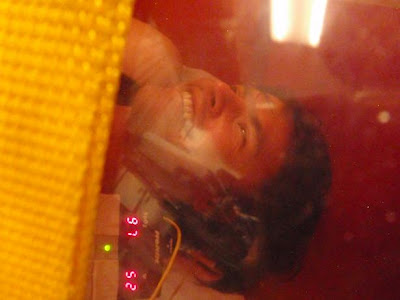 They poked at the bag as if I was some kind of guppy in a fish tank. 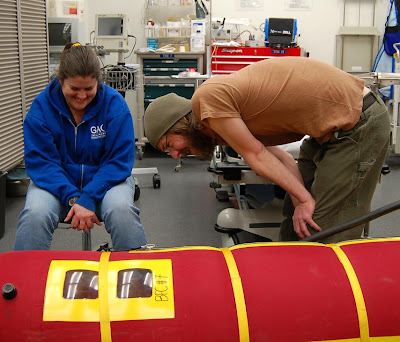 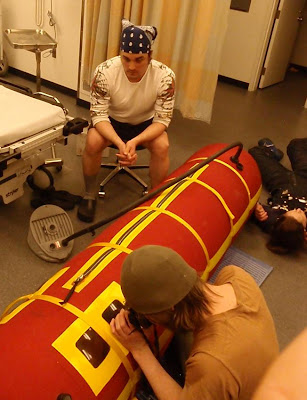 Then the bag was depressurized and I was sent back 'up' to the South Pole. 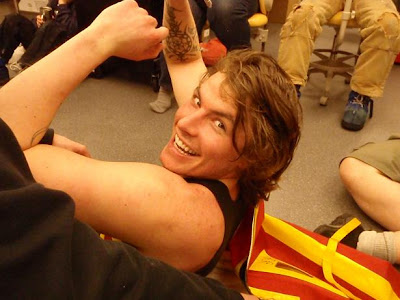 Afterwards we checked my pulse ox and it was back to 91. Well, here goes to getting toasty again :) 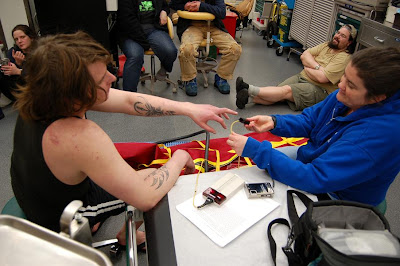