The 2010 Ozone Hole has Started

Climatologists from around the world have their eyes on the South Pole seeing as this is where the ozone hole typically resides, high above our heads in the stratosphere. We have several NOAA personal here and lately they've been launching high-altitude weather balloons every couple days to monitor ozone concentration in altitude. Last week one fellow came up to me with a graph showing ozone concentration below 220 DU at 15 km. This signals the beginning of the ozone hole. The map below comes from The Ozone Hole website and there you can find updated maps of the ozone hole. 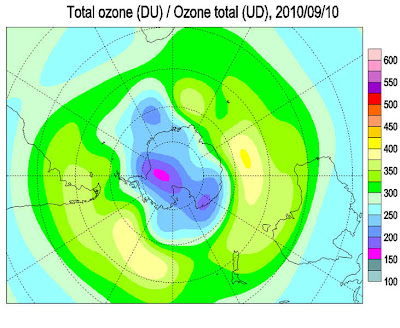 Futhermore, the World Meteorological Association posts Antarctic Ozone Bulletins in PDF format every two weeks. Visit their site for an in-depth overview of the Antarctic climate and ozone depletion. They also have a video regarding 2010 ozone and temp. datasheets here. 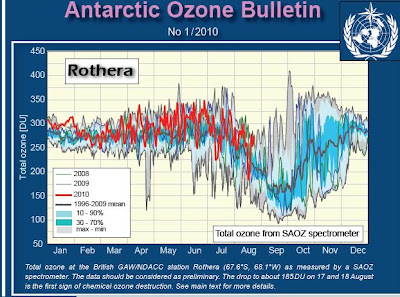 Here is a map showing Southern Stations that are measuring ozone in the Antarctic atmosphere. 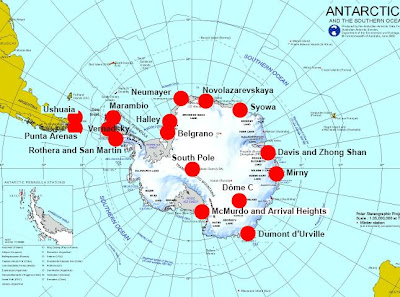 Ozone is O3 and when UV radiation strikes an O3 molecule it is photodissociated into O2 + O. Anthropogenic chemicals (CFCs and CFHCs) enter the atmosphere via pollution (i.e., freon leak from a car and then evaporated) and get broken down by atmospheric chemical processes. The result is single molecules are formed from the breaking down of CFCS, like chlorine. Chlorine destroys the drifting single O molecule, thus O2 + O cannot combine again to create O3. This process is more or less the removal of O molecules such that O3 cannot be recreated in the atmopshere. 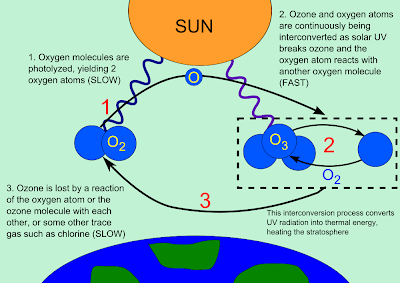 The first two charts display only a slight disturbance in O3 concentrations in the stratosphere, probably due to air parcels from the outer bands of the vortex that moved into the interior of Antarctica and have already been undergoing ozone depletion associated with the impact of early summer UV radiation at higher polar latitudes. 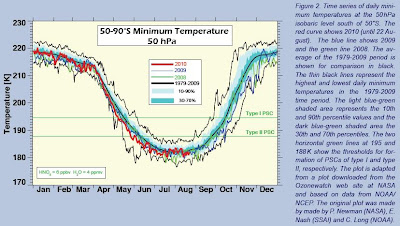 Below is a chart from a balloon launch two weeks ago showing ozone and temperature at altitude. 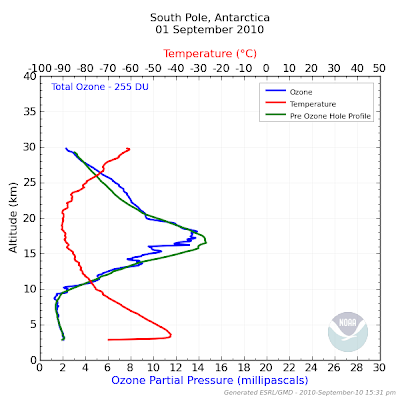 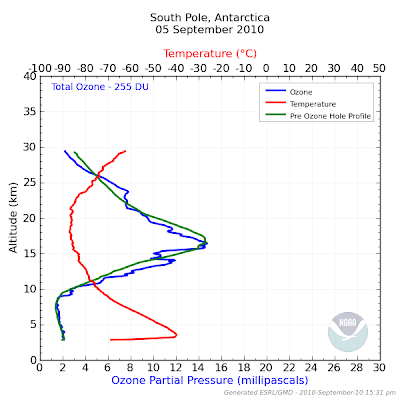 And here is our most recent chart. Note that tempearture increased slightly at 15 km and that's where the ozone concentrations decline. This was our first distinct observation of the 2010 ozone hole. 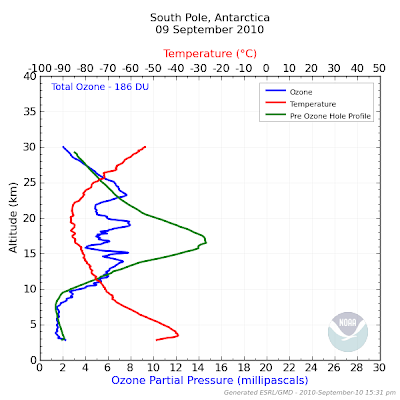 Everything was fine relatively okay until about the 1960's. After that, the ozone hole began as the production of CFCs by industrialized and 'non-developed' countries sky-rocketed.

Over the course of a year, CFCs drift southward over the Antarctic winter-time. A continent-wide westard wind vortex encircles the South Pole right before twilight begins (June-July), it traps air molecules and chemicals. It's a caged witches brew just waiting for the UV radiation. When the sun arrives the party begins and ozone is removed from the atmosphere. There's a time towards the end of the Antarctic summer when the stratosphere becomes so depleted of O3 that the ozone-depleting chemical reactions slow down. By then winter is upon us again and the circumpolar vortex collapses and allows the passage of air between the high- and low-latitudes. More ozone 'flies' in to replenish the lost stock of ozone when the vortex is broken and UV radiation also disappears then, putting an end to the photodissociation of O3. Thus a rebound of O3. Think of it this way... O3 and CFCs and UV and SPC are put in a cage together for a few months, the result being O3 is removed from the atmosphere. Then the cage is lifted in Dec. and new O3 from the North is allowed to enter the space (along with more CFCs). This means that the global ozone budget is decreased every year. 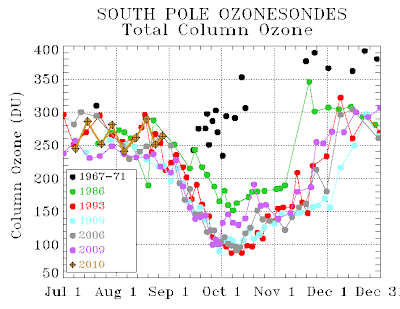 Here are a few maps of the ozone hole in the last couple years. 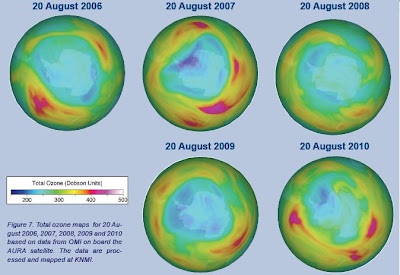 How big will it be? 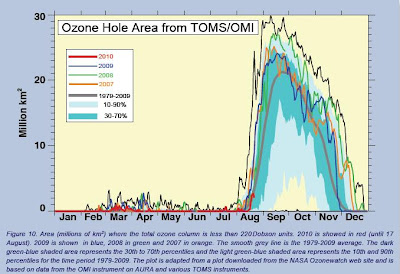 How long will this keep going on? Whenever the ozone depleting molecules quit finding their way into the Antarctic vortex. 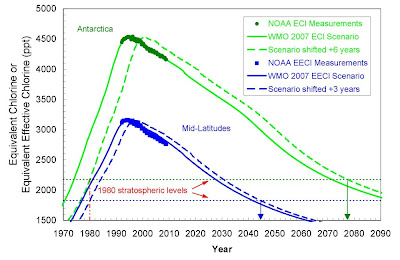