I first came to Antarctica seeking an environmental and culinary challenge and that pursuit was exacerbated when I journeyed to the South Pole. I believe that humans would not survive in a place like this with simple, natural clothing and materials. Numerous times I've dazed at the Milky Way wondering if we're supposed to be here. Should humans live in a frozen dessert where no other lifeform exists because it's too bloody cold? Tents and boots and nearly everything we use here has to be engineered in a way that can withstand the coldest temperatures on Earth. On the contrary I will say this, real fur and down coats are a miracle in this cold. Scott's team didn't stay long at the South Pole when they were the first ones to arrive in the summer of 1911 with their sleds and dogs. It was warm for them; warm being -50 F or hotter. During a winter at the South Pole human survival depends on synthetic materials, diesel generators, hand warmers, etc. I decided to put it all to the test and camp outside for just one night while it was in the -80s to see how well I could fare with the bare necessities. 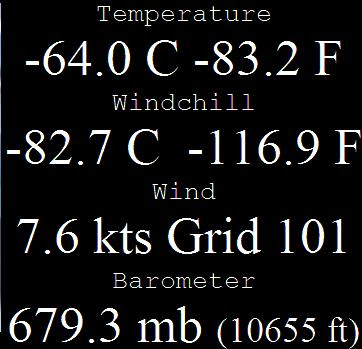 Yesterday our full moon set and according to some Native American cultures this moon is called the 'red moon'. Indeed was it red. Unfortunately, high altitude clouds moved in obscuring the majority of the moon show.

The next day (Friday) around noon I recieved word from our meteorologist that a cold front was on it's way. I decided then that I would camp outside that night and snag photos of the twilight as the sky cleared up the following morning. Back home when I go camping I bring a book, fishing pole, mp3 player and food to cook over a fire... but here, all of those things would freeze and since it's so dry, fires anywhere near the tent are a danger. The only warmth that's available outside at South Pole comes from within or those small hand and toe warmers, which aren't of much use at -80 deg F. It takes like 5 warmers in each glove and boot, plus several in the coat and many in the sleeping bag just to keep the body at -98.6 deg F.

What I brought with me was two extreme cold weather sleeping bags, a fuzzy blue blanket, 8 packs of hand warmers, 3 packs of foot warmers, an extra pair of gloves, socks and long underwater, lots of cookies, two bottles of hot water, radio, head lamp, emergency kit and camera. I wanted to see how little I could get by with and for how long. If at any time I felt unsafe I would make my way to the nearest warm-up shelter (2.0) that was about 5 minutes away. But realize that 5 minutes of bare skin exposed to -80 deg F and wind will freeze flesh in less than a minute. I didn't want to have to make any emergency exits nor face the pain of extreme cold, so as soon as I got to the tent I took a few quick photos and created my cocoon. 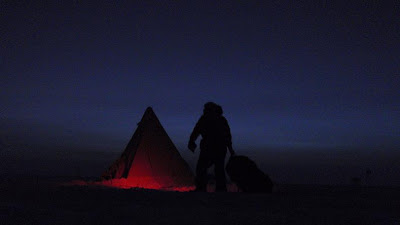 Next to the Scott tent was the pole marker. I basically slept ontop of 90 S latitude. 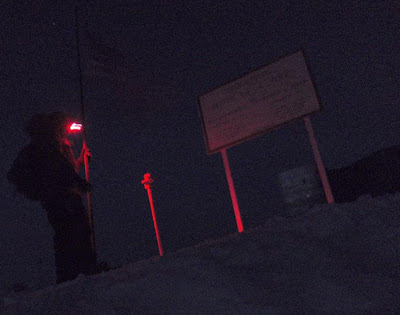 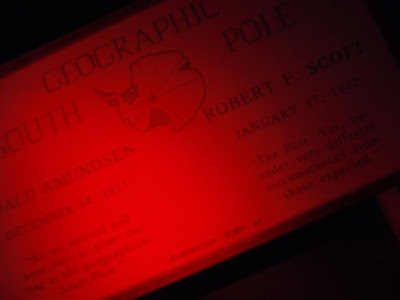 After the quick tour I began unpacking all the goods inside the tent. Every second that the sleeping bags and clothing are in open air the closer they get to being -80 deg F. Outside the tent it was -80 deg F and inside it was about -79 deg F. The only thing the tent helped with was blocking out the wind. 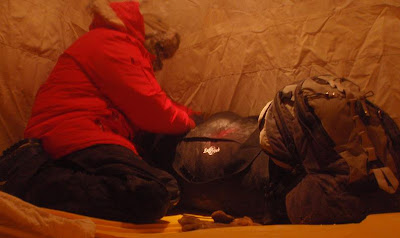 Dis be a photo of right before I climbed into the cocoon. Snow and ice were beginning to grow all along my face mask. I knew that once I got inside the sleeping bags there would be no late night potty breaks or snacks for once the seal on the cocoon was broken everything would freeze again in minutes. 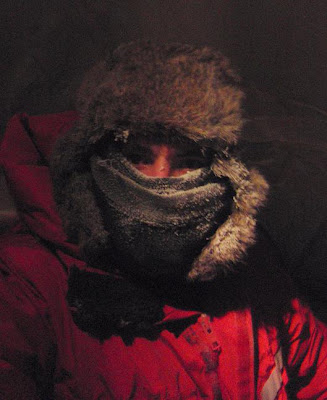 It struck me that I had no watch on me, which makes sense because I haven't owned a watch in nearly a decade. I ran outside to make a quick 'twilight dial'. The sun does a complete circle below the horizon every 24 hours, thus a line from the center of twilight to the opposing horizon point = 180 degrees = 12 hours. My check-in time was scheduled for 8 AM; I allotted myself 12 hours to try to sleep in the tent. 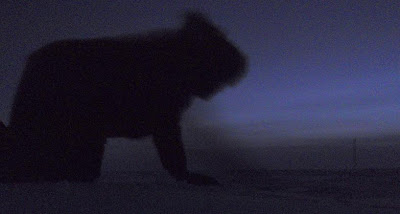 Lights out. Kind of. 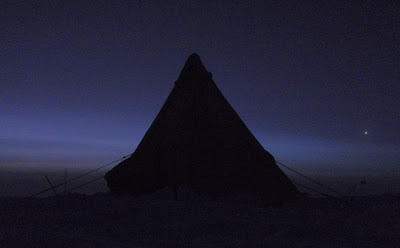 The hardest part of the night was living inside the sleeping bags. Inside them I kept myself still wearing the Big Red and wind pants, boots, food, water bottles, warmers, camera, head lamp and radio. It was jam-packed. The zippers froze and my hands froze trying to zip the zippers. I had to zip a bit, hide my hands in warmth, roll ontop the zippers to warm them up and start again. It took me over a half an hour to zip everything up and find a suitable resting position that was subject to change every 15 min. throughout the night. Once everything was zipped up I had to go pee, great. I ignored the urge and focused on something else, like not being able to breathe due to the really thin air and little head room inside the sleeping bags. 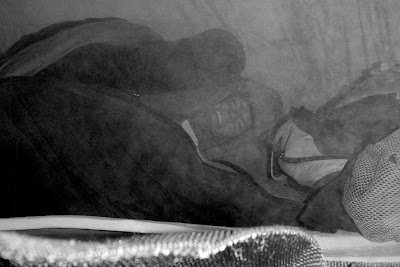 I laid down at 8 PM and slept lightly until I could feel my bag getting really cold. I found that the warmers had ran out of juice and hot water bottles were now cool. In sleep the human body cools down and I could feel my own body temperature going down. Inside the station I awake every morning to a BPM of about 40 and body temp. of 93 deg F. Outside in the tent it would be too risky to match those body mechanics because the body needs to radiate heat in order to keep the surroundings warm; produce a positive feedback system. Food (sugars) could have made me warmer, but you know what, I didn't want to risk anything and the sauna with a big glass of hot coffee was sounding reallllyyyyy nice. When I crawled out of everything I observed the change in the twilight position and estimated it to be around 4 AM. 8 hours in -80 deg F, not too bad with just a few hand warmers and fancy sleeping bags. 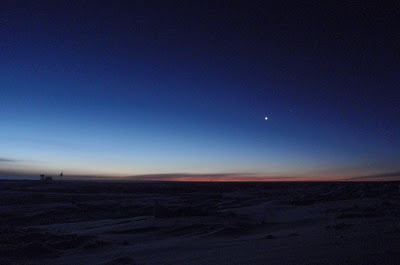 I ran around a bit to get my blood flowing again. I camped in 50 deg F weather at high altitude in Alaska a year ago and froze my butt off due to the wetness of the environment, but this wasn't too bad. I never thought once that I was going to get frostbite or hypothermia. Claustrophobia, now that's a different story haha. Everything looked different with the clouds gone and twilight glowing. I felt like I had conquered something, probably just my own curiosity as to feel what it's like to sleep outside at the South Pole. 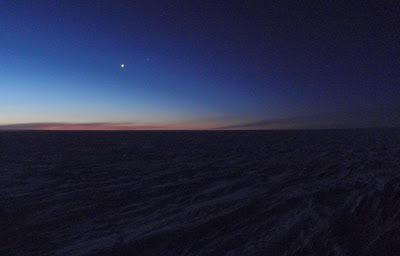 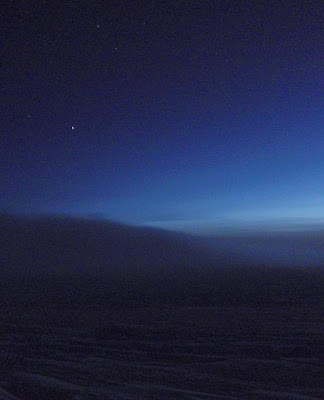 Time to pack up and get back to reality. 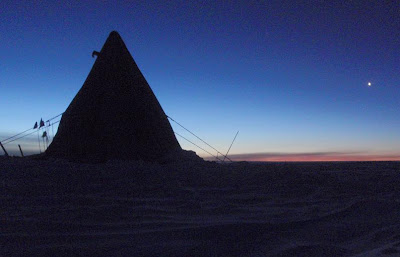 While hiking back auroras began dancing in the darkside of the sky. In reciprocity I did a little green cloud dance ;) 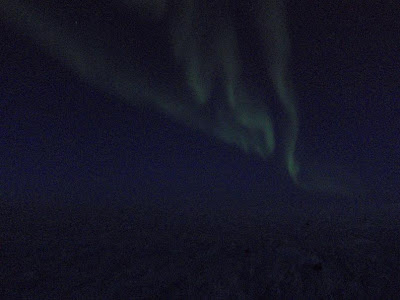 Once inside I found out that it was 4:40 AM. My 'twilight dial' was a success.