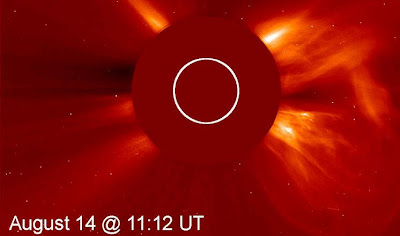 The Space Weather Prediction Center, operated by the NOAA and NWS, has issued a news statement that may have some impact for navigation and HF transmissions at the South Pole,


Solar radiation storms are divided into different categories, just like hurricanes and tornadoes. This storm was weak (S1) and it's effects are unlikely to be felt here. Since there are no airplanes flying to our station until Oct. and we don't use GPS devices, navigation disturbances due to cosmic radiation interferences are not possible. Satellite blackouts (GOES-3 and TDRS-5) could impact us, meaning we will have weak or no phone and internet service. I am unsure of how great the biological effects could be. Astronauts and pilots at high altitudes at high latitudes are exposed to greater radiation risks, thus higher rates of cancer and cell damage. We are at 10,000 feet above sea level with an ozone hole ready to spark in a month. I remember the scientists here saying that since we wear so many clothes we aren't at risk and this explains why there are so many bottles of sunscreen lying around the station. This is the first solar radiation storm for the solar cycle 24, but it is weak one. The coming years will display a more active sun and researchers at the South Pole will be looking at cosmic radiation disturbances from all the way up in the ionosphere to kilometers below the ice (IceCube).