The information below comes from Bill's South Pole website. Wind energy is very available here and I bet in the future we will see more turbines at Pole. It doesn't make much sense to say that we're 'going green' in Antarctica since there's very little green stuff, so let's say... we're 'going white.' 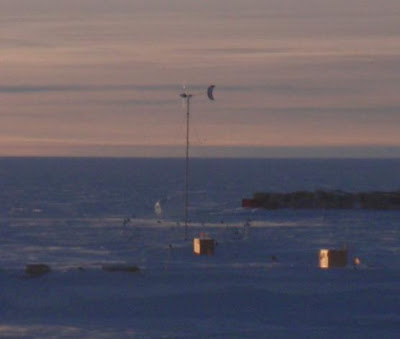 "Still, the report "Analysis of the Use of Wind Energy to Supplement the May 2005 Power Needs at McMurdo Station and Amundsen-Scott South Pole Station, Antarctica," proposes that nine 100KW units (the NPS Northwind 100 turbine) might replace up to 50 percent of the station power demand, and displace about 116,000 gal of fuel usage. This study was done for NSF by the National Renewable Energy Laboratory (NREL) in Golden, CO (authors are I. Baring-Gould and R. Robichaud of NREL, and Kevin McLain of Accurate Engineering).
More recently, a project spearheaded by the New Zealand program installed 3 330 KW units on Crater Hill, work was underway in the 2008-2009 summer and commissioned during 2009-10, this system is now providing power to Scott Base and McMurdo.
As for Pole PV...originally the plans for the elevated station included the installation of solar panels on the exterior, but these were deleted due to a cost comparison of installation, operation and maintenance vs the limited amount of energy production. And the active solar mechanical heating system originally installed as a part of the Elevated Dormitory was not retained when that building was converted into laboratory space for the IceCube project. However, passive solar heating continues to be used for small outlying buildings and facilities.
Other references: the 1999 paper documenting the wind turbine and PV project at Pole is "Renewable Energy Field Tests at the South Pole," by Gary Norton and Edward Linton of NPS, and John Rand and Christopher Williams of CRREL. The paper was presented at the 1999 American Society of Civil Engineers (ASCE) cold regions engineering conference, which also featured a comprehensive design review of the elevated station. The black-and-white image used above is from that paper. A second paper, "Evaluation of Photovoltaic Panels at the South Pole Station," by Christopher R. Williams and John Rand, was published separately by CRREL in 2000 as TR-00-04. it was the source of the color photo of the PV panels on ARO. The color photos of the turbine are from ASA engineer Chris Rock. "