Two days ago there was an announcement on the station loud speakers saying, "The station will be closing on Saturday, please bag drag and prepare to fly out within the next 24 hours." This came a couple days before most people had anticipated. As I lay dormant in my bed last night I heard another call on my walky talky saying, "Skier 55 has left the runway, that's the last flight, have a good winter." Upon awaking I noticed how quiet it was. Just a few days ago we had 160 people, now our population is 46. I know most of the people now, it's a fun group and this winter will be a blast. 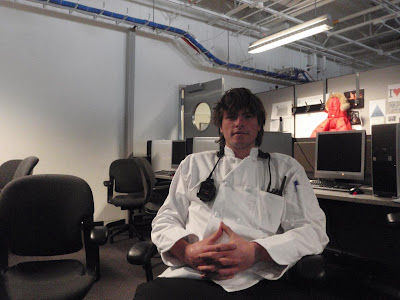 Invert the colours and I'm on Mars. 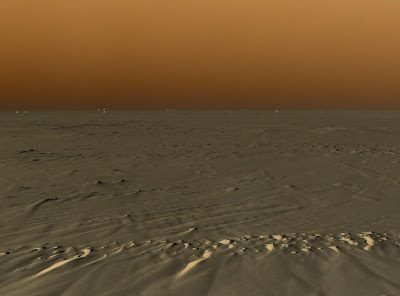 Saturday morning I had my first run at breakfast solo. Everything came out good, but I realized the eggs take a little longer to cook at this altitude, so I was 15 minutes on putting them out on the line. As a backup I just made fresh eggs on the flat-top for customers. Mmm pre-cooked sausage patties. 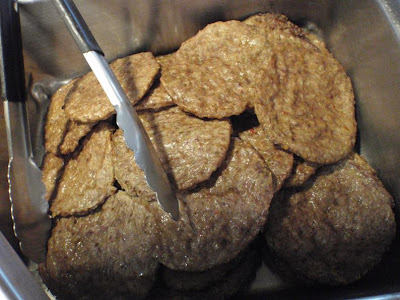 Meat fritata. At MacTown our fritatas were basically quiches. Now that have access to iron skillets I decided to do it right. Since the eggs take longer to cook it was hard not to brown the top. Fritatas traditionally are not browned. It was still tasty. I've been breaking my vegetarian/vegan eating habits. Lamb, red meat, and fish my body likes. But, pork and poultry upsets my stomach. 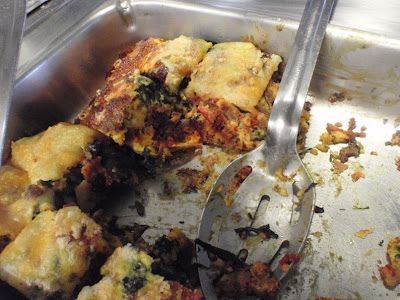 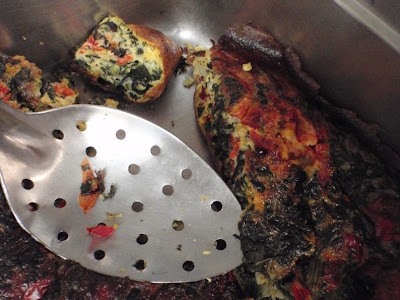 Heres' Beaver weighing out the Naan portions. He left last night. We've come to the conclusion that Fran can't do math, I have short-term memory loss, and Raul gets preoccupied with other tasks (i.e., girls) too much. It's a great team. 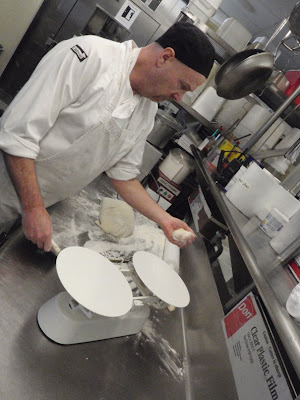 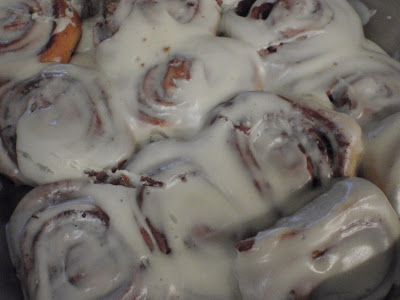 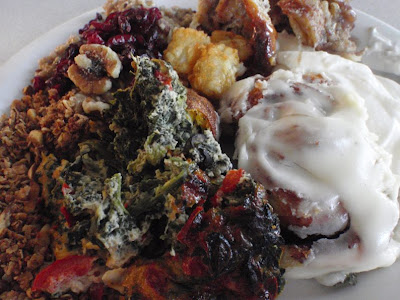 With the flights coming in we received our last order of freshies. 5,000 lbs. worth. At MacTown we would go through that much in a week. With waxed apples, oiled eggs, and plenty root veggies we are going to try and make our ration last for quite some time. I heard we also received our 400,000 gallons of fuel for winter. It's a lot, but we still have to conserve mass. If there's a leak we could be in big troubs. 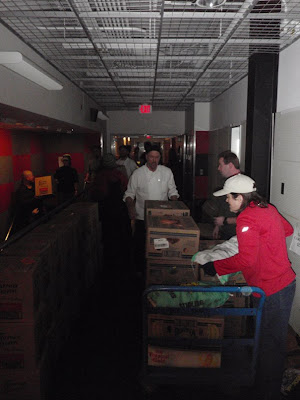 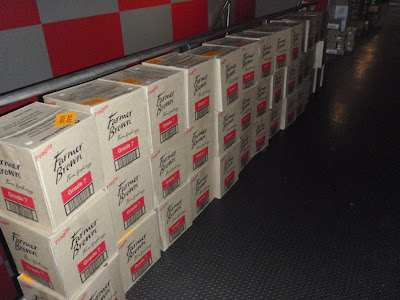 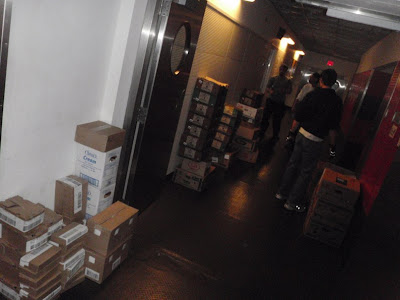 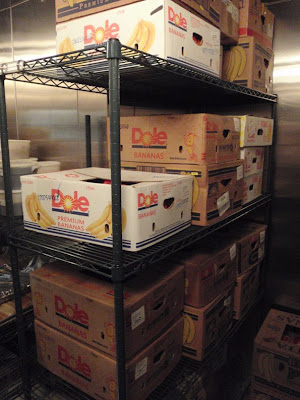 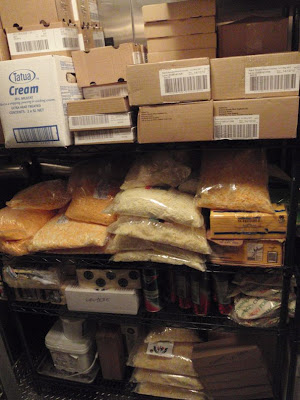 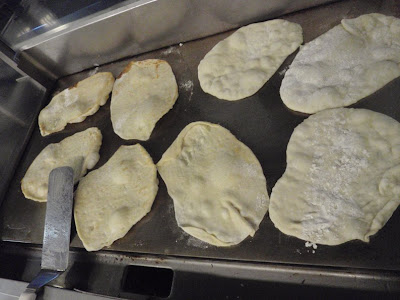 Our first all-hands meeting. We talked about how the old station is unstable and if you go there you may fall into 'quick ice' and never be seen again. I think I'm going to stay inside or at least just really close to the station all winter. 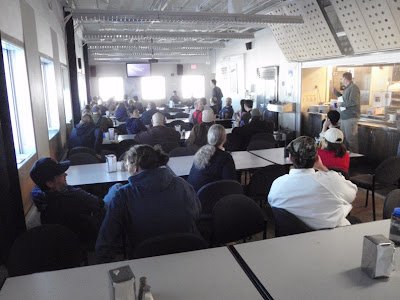 I have a few questions for the IceCube neutrino beakers. I will do a separate post later on in regards to details about IceCube. One of the scientists down here, Immanuel, is from Germany and I've made good friends with him. He worked at CERN, the worlds larger underground particle accelerator, before coming down here. I've been picking his brain about quantum physics. 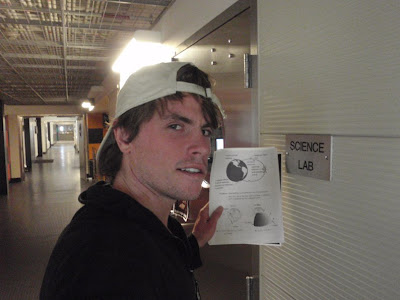 Inside the science lab. 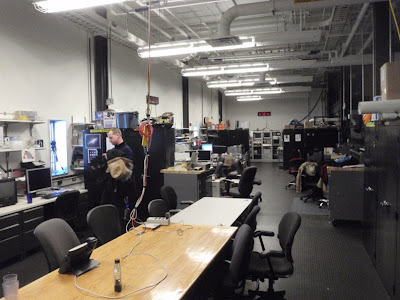 IceCube is made up of thousands of these small computers. There are 60 per string, 16 meters apart, and each string hang a kilometer into the ice. The ice here is pure and 'noise' is minimal, thsu creating a perfect environment for observing high energy particles in their natural state. These balls pick-up on the light (photons) emanated by muons derived from neutrino decay. They are layed into a 1-km ^ 3 matrix and with special software Immanuel can monitor what particles are moving through IceCube and how they are acting via digitized data from the balls. IceCube is actually monitoring particles coming from the North and heading southward through the Earth, and in the Arctic there is a similar experiment to monitor wants shooting through us and going northwards. Neutrinos penetrate straight through the Earth. Muon, the neutrino daughter particles, move faster than speed of light in our galaxy hence the blue cone they produce. 1,000s of muons occur each second in IceCube whereas neutrinos are only a few couple each day. The goal: find the source of Neutrinos. Black holes? Galactic processes? Aliens? IceCube is just an eye looking towards the northern sky and seeing what's out there. 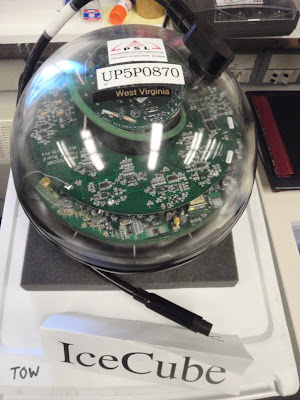 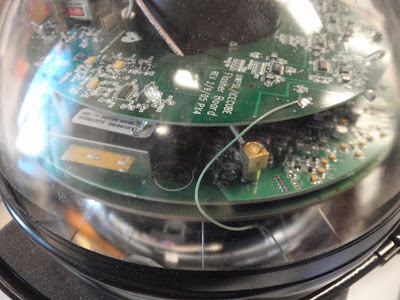 This part picks up on the photon emissions. 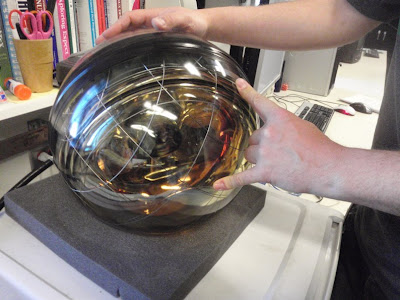 The peace sign is custom made so that when IceCube dies and falls deep into the glacial ice holes, future generations or beings will see that this project was done in the name of Peace. 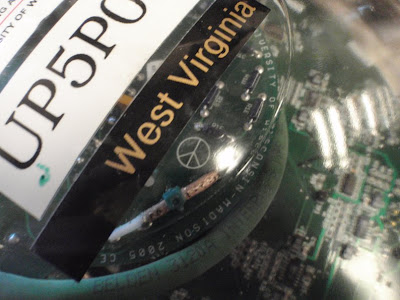 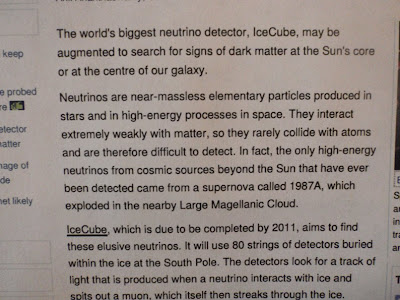 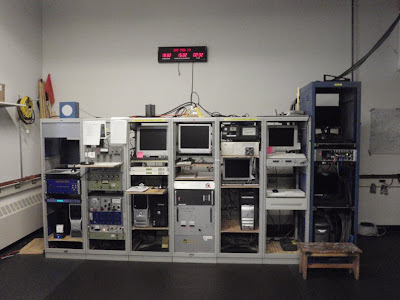 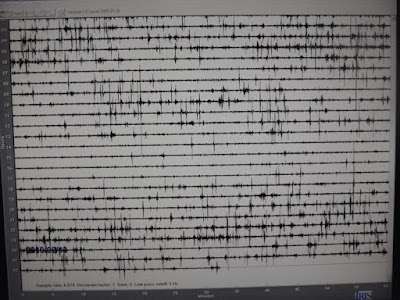 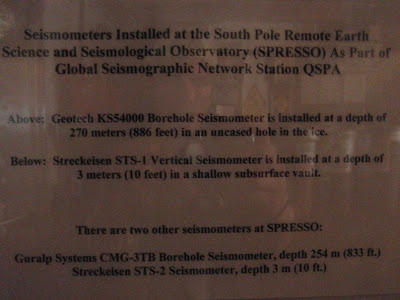 At lunch I talk quantum mumbo jumbo with the scientists. 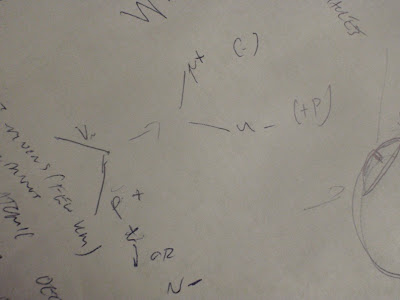 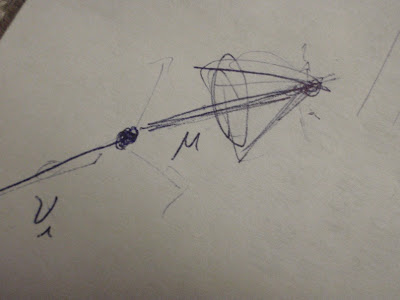 Millions of neutrinos are going through your body right now, but only a couple will interact with your Earthly molecules (i.e., H20) over the course of a lifetime. I beg the question, does this have anything to do with genetic mutation and evolution?
by Cody
Newer Post Older Post Home
codyleemeyer@gmail.com