I awake to this every morning. After climbing out of bed and getting a jug of coffee I meander outside to the porch to check out the sky. Halos have been ringing the sun over the last few days. It's -85 F with wind chill, steady wind, ice crystals floating everywhere. 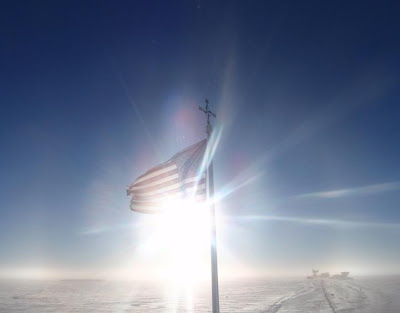 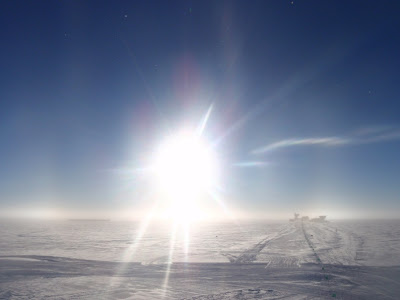 For the weekend we stock up the leftover fridge since the kitchen is closed on Sunday. I made 50 breakfast burritos, two quiches (lamb and veg.), a bunch of yogurt, bagels, and pastries. 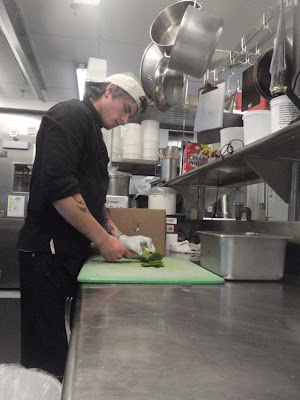 The coolest thing happened when I took the eggs outside to cool... hoar frost grew on them within minutes. I laughed, the simple things amuse me. I mean how often do you get your hoar frost on your eggs? 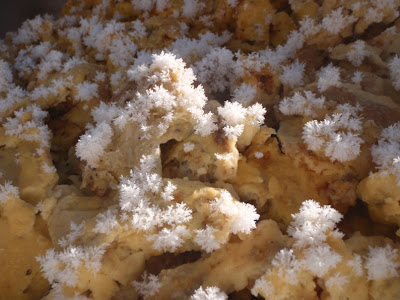 The people working on closing down the summer camp have brought in a lot of junk leftovers for us to puruse and take home if we wish. I rummaged through it and got a few bottles of Vitamin D supplements as well as some fake plants. Hey, let me tell you a bit about vitamin D. 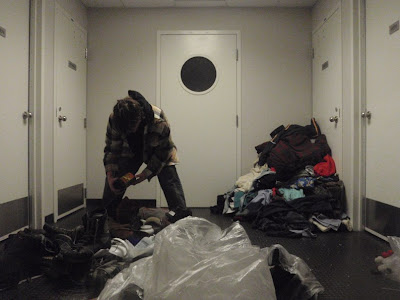 Relatively few foods naturally contain vitamin D, the most abundant being oily fish like salmon, sardines, and mackerel, or old-fashioned, cod liver oil. Because of limited natural sources, numerous foods, such as milk, are vitamin-D fortified.

Many scientists now believe we need 1,000 IU per day of vitamin D (IU = international units, a measure of vitamin potency) to avoid deficiency. For reference, a salmon serving contains about 360 IU, a glass of fortified milk about 100 IU, an egg 25 IU, and a tablespoon of cod liver oil 1300+ IU.

In comparison, full-body sunbathing for a period of time that will just make you turn pink will produce 10,000-20,000 IU of vitamin D, equivalent to 100 to 200 glasses of fortified milk. Given such copious production, relatively casual sun exposure (arms, etc) should meet vitamin-D needs.

Remember, however, that no vitamin D will be generated in short-daylight months above certain latitudes. In these periods to avoid vitamin-D deficiency - especially if you don’t like oily fish or are lactose intolerant - you will need to consume a supplement or use a UVB-emitting tanning bed. Studies have shown that individuals who use such a tanning bed in winter have serum levels of 25-hydroxyvitamin D (the marker for vitamin-D status) that is 90% higher than controls.

The importance of solar-produced vitamin D was underscored in a study that evaluated vitamin-D status in a submarine crew after two months of acute sun deprivation. Although the crew consumed a vitamin-D fortified diet, their levels of this nutrient plummeted.

Vitamin D can be toxic if too much is consumed from supplements or mistakenly over-fortified foods. However, prolonged sun exposure does not generate toxic vitamin-D levels due to the body’s feedback regulatory mechanisms." - Laurance Johnston, Ph.D, 'Sunlight, Vitamin D, and Health'

With all that said, I also spoke with out station doc on Vitamin D. She says that sunlight is necessary for good health. People say drink a glass a milk for good bones, but really... you need 10 glasses of milk to get your daily amount of Vitamin D. A half hour in the sun will fill your body with all it's Vitamin D needs. For us at the South Pole, the sun is already too low in the horizon to offer any UVB for Vitamin D making. The greenhouse has a limited ultraviolet spectrum for maximum plant growth and I don't think there's any UVB there. How will we get our Vitamin D doc? She said that supplements will be useful to a degree, but sunlight is necessary for the full production process that helps our bones, cells, etc. Good news is that since Vitamin D is stored in fat cells we are good for up to year with D with the assistance of supplements and milk. Thankfully I spent 6 weeks in Belize soaking up the sun every day before coming down to Antarctica.
by Cody
Newer Post Older Post Home
codyleemeyer@gmail.com