First we had to leave the Ice. Here's the pax on Ivan the Terrabus. Terrabus = city bus with 3 meter diameter tires. 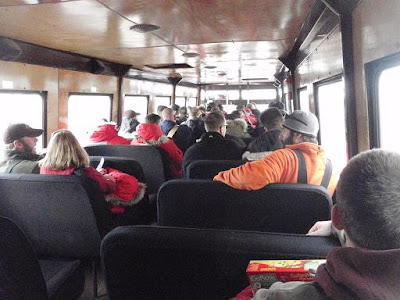 Ice rigging is a tough job. 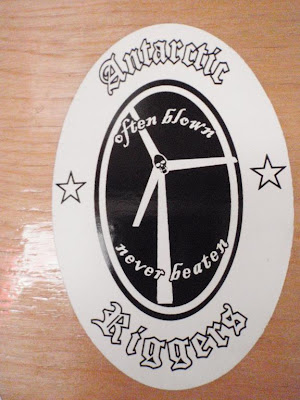 When we arrived to the Pegasus airfield the shuttle driver tells us there are no computers, no phones, no wondering allowed, and really no place to keep warm except the bathroom which consists of two makeshift toilets and is designated by a large penguin sign. 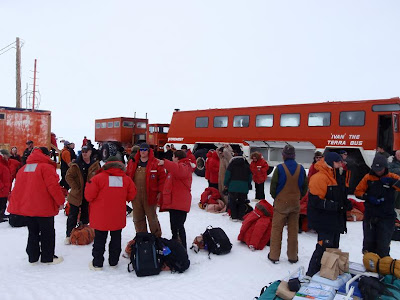 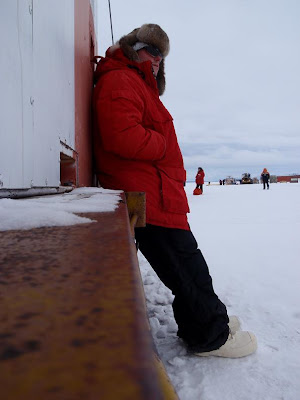 I took a few courses on human geography while schoolin in Canada and did a bit of GIS modeling of human behaviours. It was fun stuff. For this case study/observation... I found that the longer we waited on the open ice the more dense and distinct the person groups became, very much like how penguins cluster. In fact, that's what we looked like, a bunch of fat red penguins trying to keep warm by clustering to fend off the wind and making noise just to keep active. 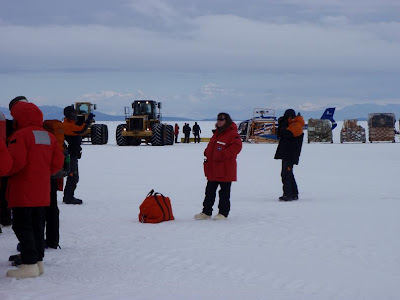 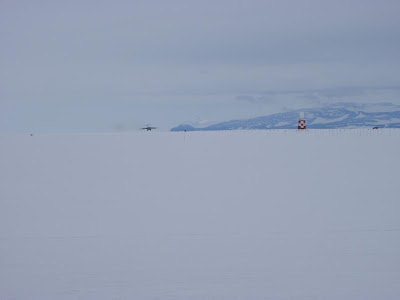 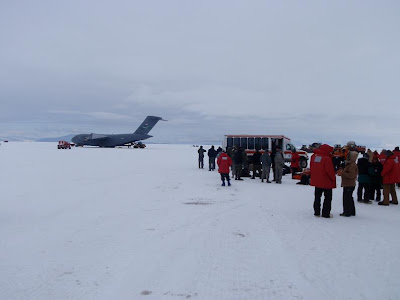 They also pushed in the HNZ Helo. 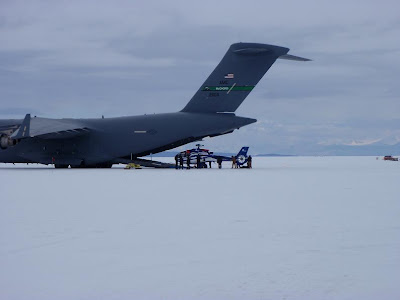 It's showtime boy and girls. 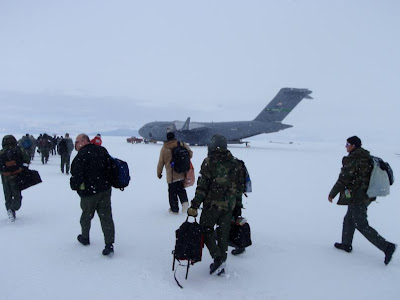 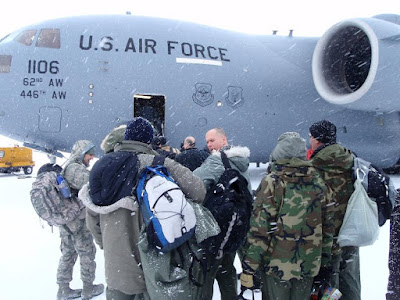 It was cool sittin next to the fashionable helo. 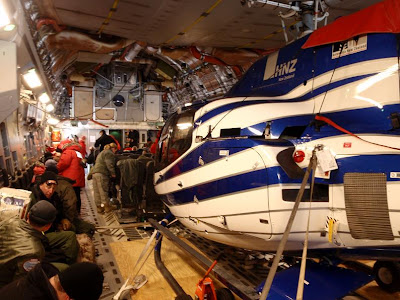 5 and a half hours later we landed and the first thing most of us picked up on was the smell of the air. What's this, what's this... humidity? No way! 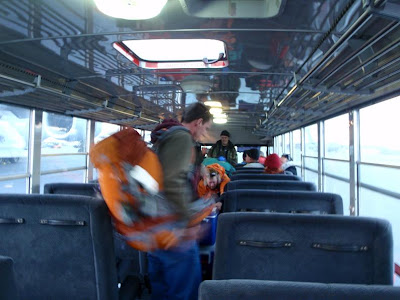 A few New Zealand scientists took coolers off de plane. The Air Force dude in front of me said they were probably bananas from the South Pole. Huh? I bet the Pole hoards every scrap of fresh produce they obtain. I laughed and told him it was penguin meat. Probably ice or microbio samples. 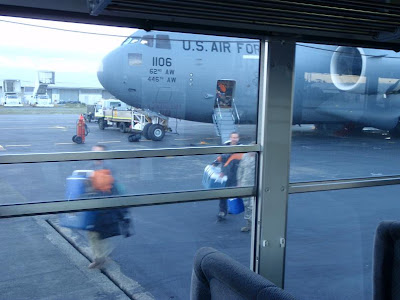 I passed customs then checked-in to my trippy blacklight-lit room at Hotel So. With little to unpack I just grabbed my camera and cash, put on my sneakers and headed to my fav. Japanese restaurant Su Ra. 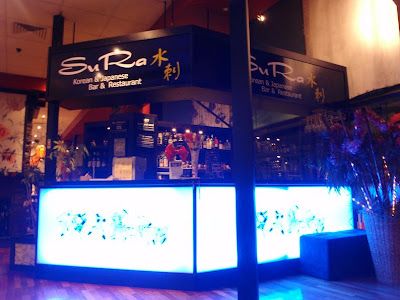 Watchin de chef do his magic. 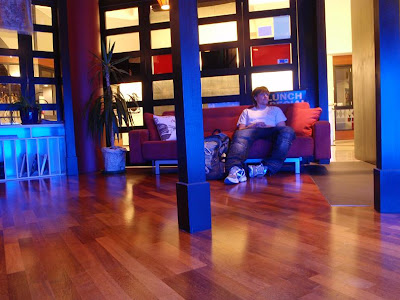 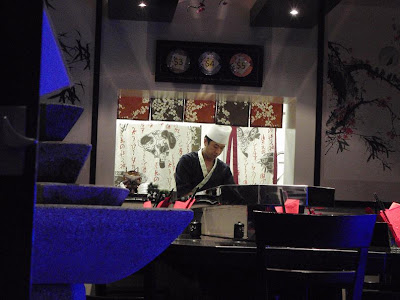 Grilled unagi. The dish has changed a bit from a few months ago, but I really enjoyed the sweet sauce and carmelized onion bedding. 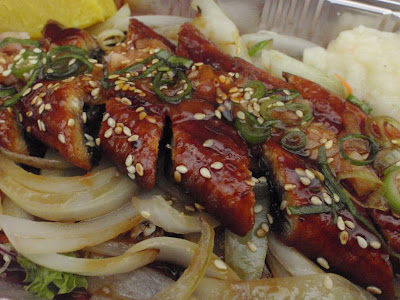 As for the California Rolls.... I've had and made better. 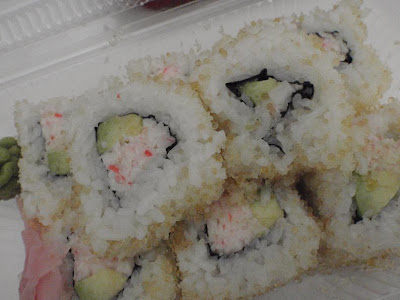 Once my tummy was full I skirted to the streets to see what was shakin on this holy night. First time I've seen the moon since October. First time I've seen night since October. But, the black night sky didn't hit me like it did last season. I think my mind, body, and soul has adapted to extreme migration patterns and sky conditions. Whether I'm North or South, home or aboard, cold or hot, night or day, I'm still rollin the same. 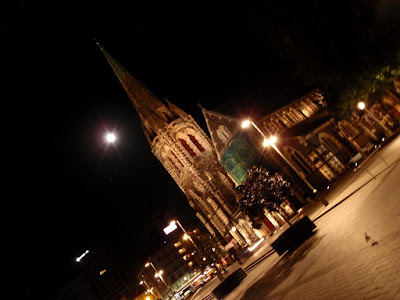 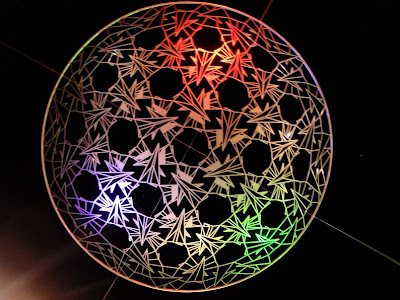 Party central started to get noisy around midnight. 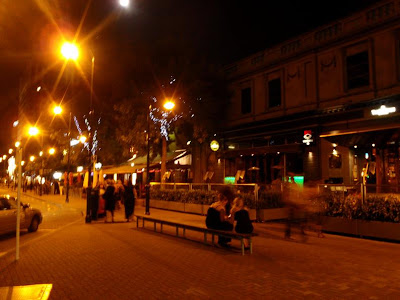 While taking this pic I dude from Auckland came up to me asking what bars were cool. I said I had no clue. After my reply he knew I wasn't from Cheech and wanted to hit up the bar scene with me. "Girls here dig Americans." Then he looked down to see me dressed in my Puma running shoes, black boxing sweat pants, black hoody, and silver backpack... he goes, "man, get some shoes, some jeans, and let's party." I got shoes, I ain't feelin jeans, and I just wanna chill. He then starts askin me if the Bloods and Crypts, and KKK are real. He says some gangsters in New Zealand are starting to act like US gangs. I tell him it's no good, brother fightin brother, bloodshed in da streets, why not there be peace? When dem guns come everything falls apart. I bid him farewell and drifted along the river enjoying the nature of it all. 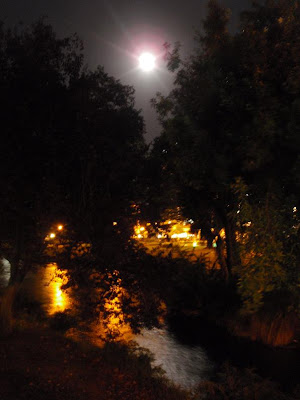 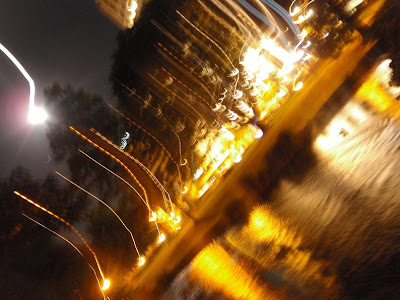 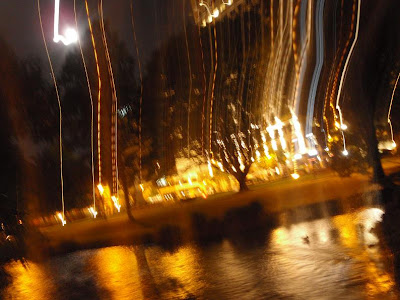 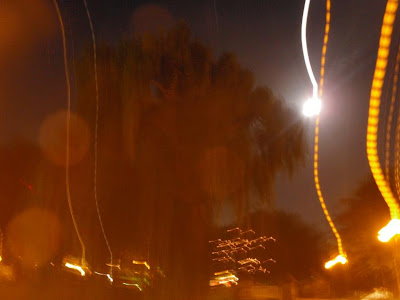 Eventually I had to stop trampin along the river banks and to make it back to my room... which meant I had to confront the aroma of a million purfumes and streetbeds of human waste. Note: stick to the alleys and you can dodge the drunken chaos. Be gangsta. 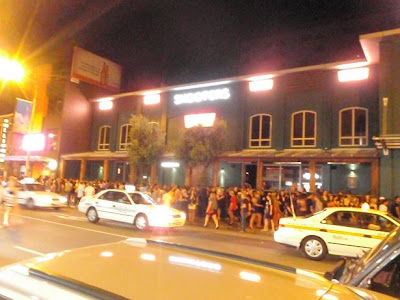