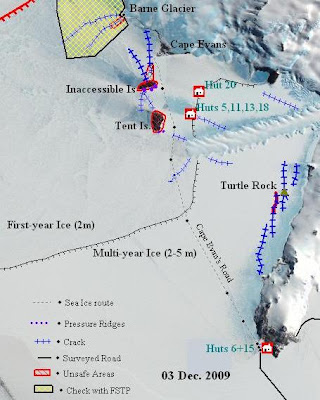 This report comes at a time when most sea ice work is coming to a close and fish huts are expected to be brought back into town in the near future. Cracks with open water on the Cape Royds route are now at the width where they are too wide to be crossed by most vehicles as per the USAP guideline of 1/3 of vehicle track length. We will look into pulling all the flags along this route very soon. The rest of the Cape Evan’s route is in better shape but will also close fairly soon. REC trips to Cape Evan’s are finished for the season.

Snow deposits and high winds have kept the sea ice cooler than expected over the past two weeks. Ice thicknesses have not seen significant change, but the overall strength is decreasing as the ice warms and becomes more saturated with water. We are seeing more moisture in most locations, indicating a shift to ice temperature period three (24-27ºF). Tidal cracks and pressure ridges are starting to see an increase in flooding. Large snow deposits are pushing the sea ice deeper into the water and are also making it difficult to identify active cracks.

The most recent MODIS image shows the Sea Ice edge in a similar position as in the previous report. Here is a link to the 03 Dec 09 image:
http://rapidfire.sci.gsfc.nasa.gov/subsets/?project=antarctica&subset=RossSea.2009335.terra.250m
The sea ice edge seems fairly stable at this time, with ice thicknesses still close to 2m right at water’s edge. The closest open water is a little over 18 miles from McMurdo as the skua flies. We will continue monitoring the ice edge and anticipate it getting closer to McMurdo then it has in recent years. On a clear day you can see open water from many vantage points around McMurdo Station including Ob Hill and Hut Point Ridge."