This morning I went to the all-hands station safety meeting, last week I was elected to be the kitchen safety representive for these meetings. I learned that by converting the diesel power grid to accept inputs from the wind farm, the charging components are altered, which causes slower power currents to essential needs like alarm clocks and emergency lights. In simple terms, our alarm clocks tick slower and in just 3 days my roommates clock slowed down by 4 minutes. Then we discussed things like making helment gear issue a necessity for those who rent the bicycles, and watching out for fork lifts. Neat stuff honestly, glad to learn more about the McMurdo environment/community. I then worked 9 hours in the kitchen. Today's my half day so really I should only be cooking for 6 hours, but since on Sunday there is a marathon run up the 1,000 foot Ob Hill I decided to put in the hours today and take off them on Sunday to run. I made some great tofy stif fry and prepped everything for Linda's bleu cheese and tofu bread pudding. I really wish I could be in work tomorrow to cook that, sounds delicious, and I added some caramelized shallots and apples to the heavy cream-egg mix :)

After work I went to a celestial map class, hosted by a Air National Guard cartographer/pilot. It last three hours and I was shocked at how well she taught that class, then I find out she is also a teacher on aviation mapping. Some things I learned... Zn is not zenith the solar angle for celestial viewing. It is the direction from the viewer to the sub point, the point at which the solar rays are directed to the center of the Earth and correspondingly strikes the Earth surface. If you shoot at solar noon you can find your sub point. LHA = GHA (-/+ east/west (long.)) The highest mountain in Antarctica is a little more than 16,000 feet above sea level and since she flies C-130s all over she gets to see all the cool spots, but she says the big mountain doesn't really look all that big. The geomagnetic south pole is really a di-pole, this has two geomagnetic 'hot spots' that compasses can pick up on, but one is more stronger and that's what compasses point to. The geomagnetic south pole is actually north of us by standard maps, some 200 miles off the coastline... does that make any since? Ice airplane skis work like ice skates, the planes movement causes friction between the ski and ice = heat = water = slipperiness and take off. The snow is getting mushy with the middle of summer approaching and planes are finding that there is too much water = too much friction = hard to take off. Well, I'll stop there, I got about 3 pages of notes. 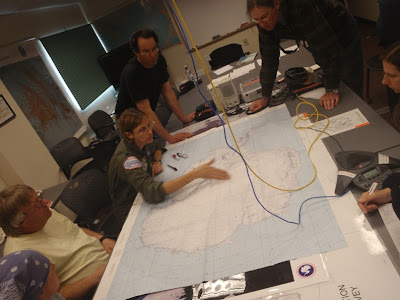 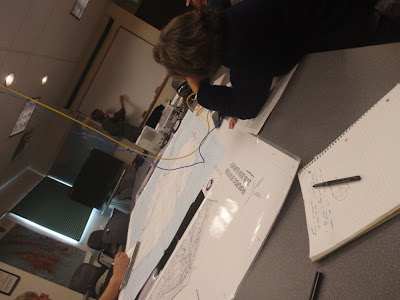 Back to the kitchen for a synopsis of the last few days... 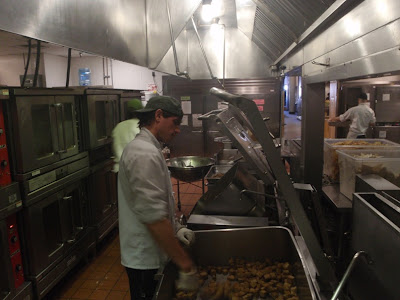 I went into work on Sunday, three days ago for us, and the menu called for southwestern beans and tempeh. Last month the Sous made it into a stew. I decided to kick it up a notch and make 450 cheese and bean burritos. Not all of them have cheese so the vegans can enjoy too. 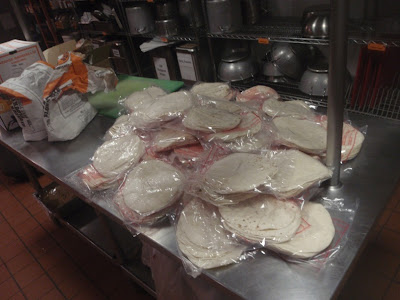 Ice machine died. People were freaking out, I reminded everyone that we are in Antarctica and there's 90% of the world's freshwater trapped in ice on this continent and the temp. hovers around freezing all the time... so I don't think ice is too much of an issue. 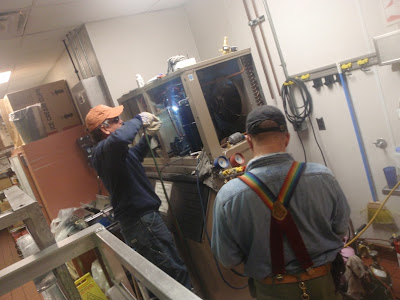 I decided to knead the seitan first thing since it takes a bit of time to work the gluten. The seitan kneading process was basically two 10-minute boxing rounds with a half hour break in between. 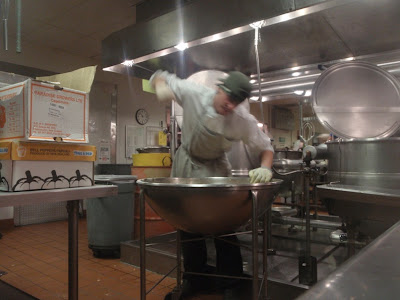 Seitan doesn't like anything green, natural. It spits all the veggies out when kneading, but the few pieces that remain add a delicate change of texture and taste. 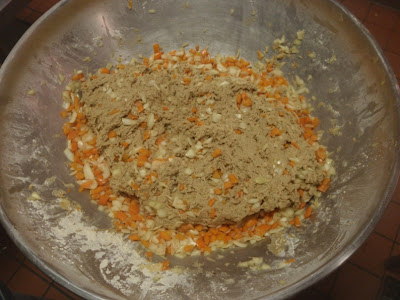 Delta out back. Shuttle Meg's has come to pick up the food for runway. 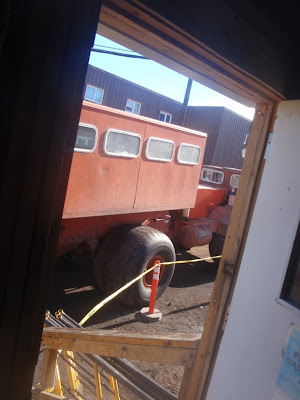 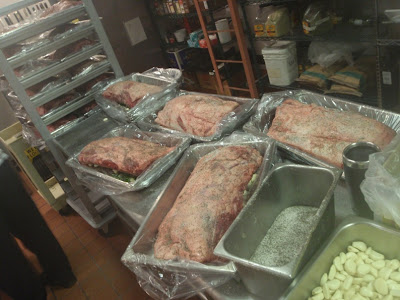 And bean burritos. In the past Chefs have the consumers wrap their own on the line, but I thinks it best to give the consumers an upperhand and wrap it for them. The benefit of this is that I can bake it too making the tortilla wrap crunchy, just the way a burrito should be. 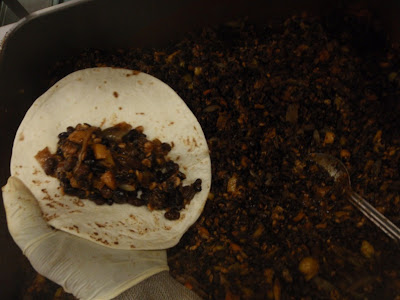 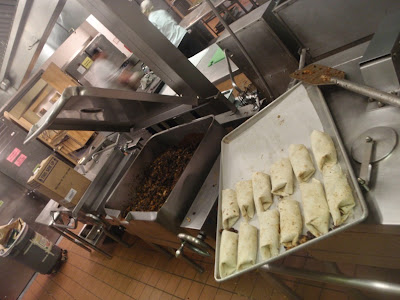 The final product. The last batches I did on Mon. and Tues. I didn't top with the homemade chili sauce as seen below because I felt that it hampered the presentation a bit, but the sauce was offered on the side. 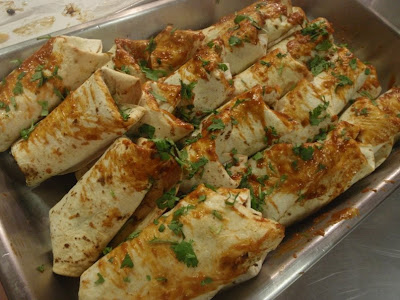 The tower of burritos. 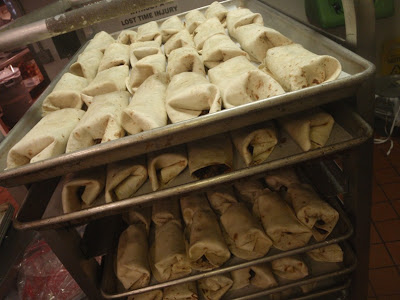 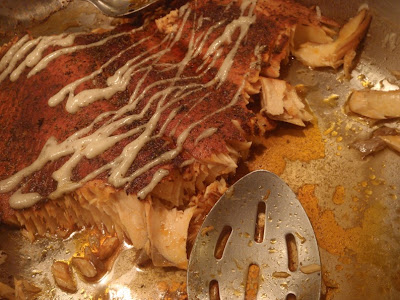 My chicken noddle soup from yesterday. 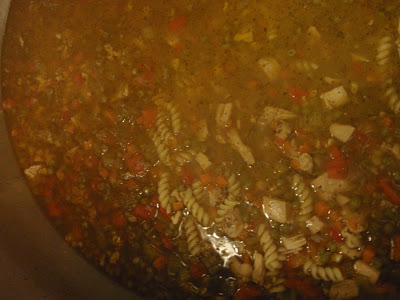 Fried seitan. This was the last of seitan reserves for the season. Finish it off with a blast I thought, deep fry it baby. I roasted a whole bunch of carrots and onions, threw them into a hotel pan. Then I covered the bottom half with sweet thai sauce. Ontop of put the fried seitan. This way the seitan retains it's crispiness after spending hours in the hot box. 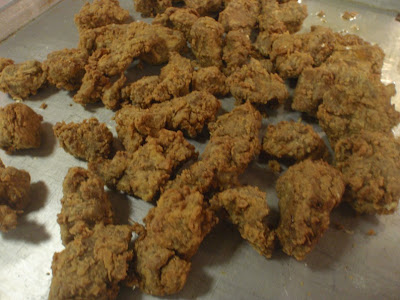 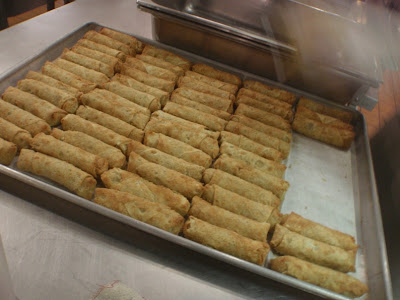 Crazy science painters. These folks are testing a new paint for extreme cold and UV climates. 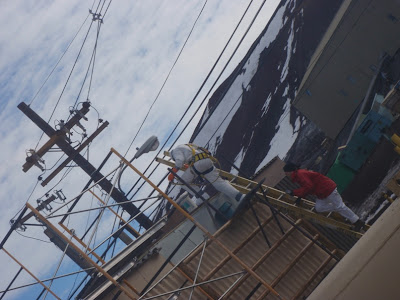 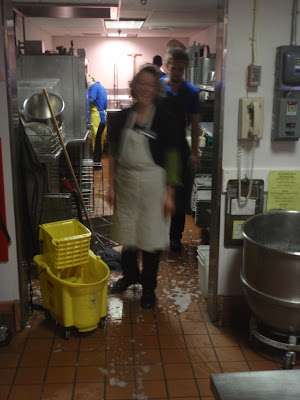 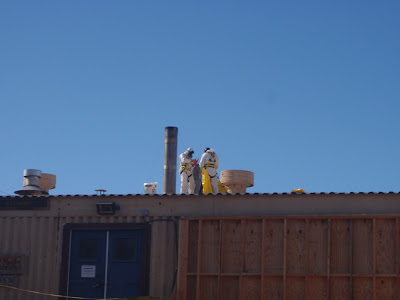