Two days ago I attended a really cool science lecture on a high altitude balloon project that is looking to monitor 'precipitation' events of electrons for the radiation belts in conjuction with a NASA satellite experiment that is going to happen in 2012. The satellites will be put into a geosynchronous orbit near the radiation belts. The balloons will be in a lower orbit and measure the rain of energy vs. the input into the radiation belts. We covered lots about the sun and Earth relationship. Her graph showed that the next solar max. won't be too big as previously predicted. Energy coming from CMEs or extrasolar sources are channeled to the radiation belts and get trapped into the Earth's magnetosphere. The mirror points for the magnetic loop are the poles, and that is the reason why you see northern/southern lights at the poles. Energy falls from the radiation belt and interacts with different atoms at different temperatures and pressures, creating different colours and formations. Auroras. Here at the south pole we don't have much ozone (O3) above our heads, so we naturally get more high energy (probably cancer too) at the surface than anywhere else in the world. Does the explains why the Polies are a little crazy ;) I asked her if this energy could activate CCN (cloud condensation nuclei), like it does in the North to create low cloud cover and cooling, she said she never thought about that. Maybe the abundance of high energies getting through into the troposphere due to the lack of ozone are having an unique effect on weather pattens in the South Pole, maybe that's why we are in fact getting colder and windier down here. Another interesting fact was to know that U.S. Air Force is looking at ways to fix human created radiation belts due to high altitude nuclear explosions. Nuclear explosions high up there create artificial radiation belts because the radiation gets caught up the earths magnetosphere. One bomb up there could knock out all satellites, so the Air Force would like to think of ways to get rid of that nasty radiation once it's emmitted. I could start looking into HAARP and geomagnetic research projects, but I ain't got that time. I'm more preoccupied with fixing the damage we've already done to the land and seas. If they want fireworks, go for it. 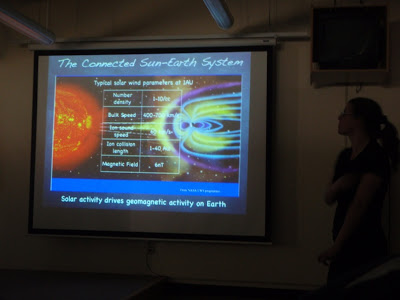 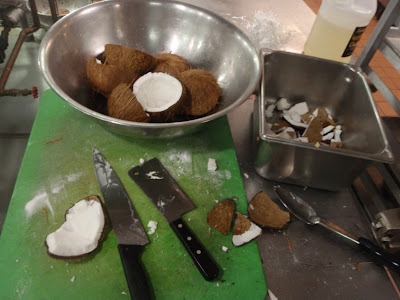 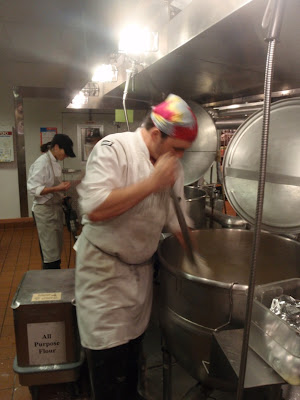 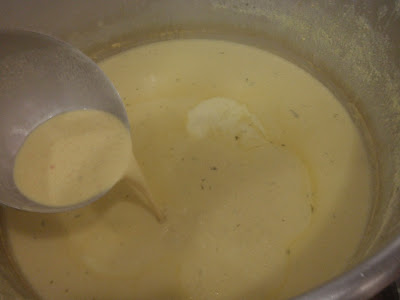 Once you make it you got to wrap it, temp it., put into the hotbox, put on the line, temp. it, pull from the line, throw it out, put another out. Everyday I might have to make a soup and veg. entree, sounds simple, but you have to haul it, thaw it, cut it, slice it, pan it, cook it, temp it, package it, store it, check it, eat it, then deep freeze what's left and haul it off again to be used tomorrow. 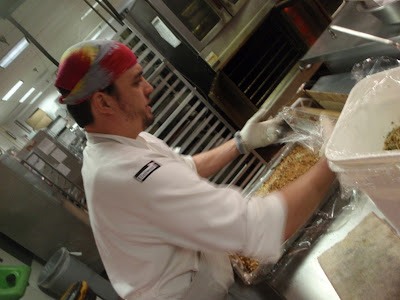 Every good stir fry starts with a good seasoned oil. To your sesame seed oil/canola oil mix add a little ginger and garlic until it begins to brown. 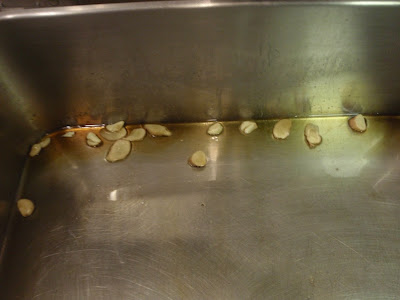 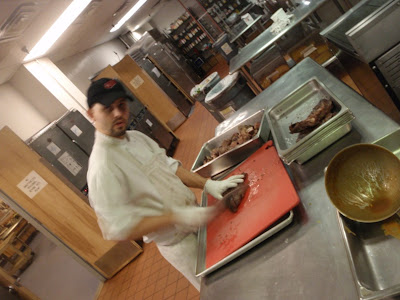 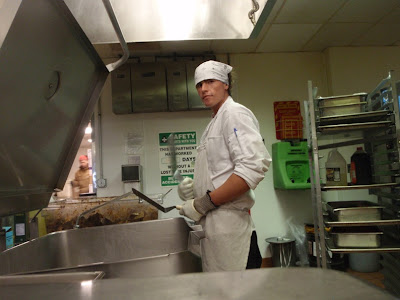 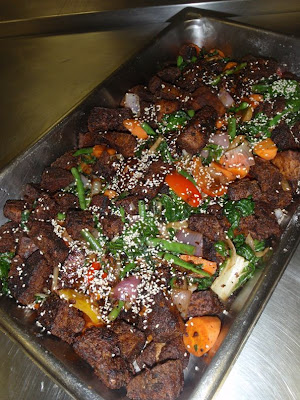 Don't pack or eat a pest. 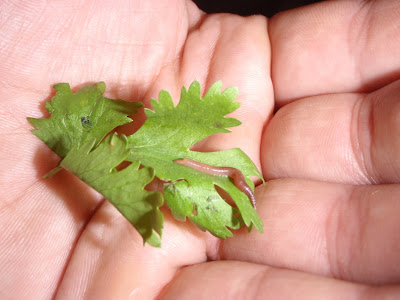 We got some crazy fruits in on the last shipment. These babies are from Thailand and like a lychee. I borrowed a crate and have it hidden in the cooks box for snacks :) 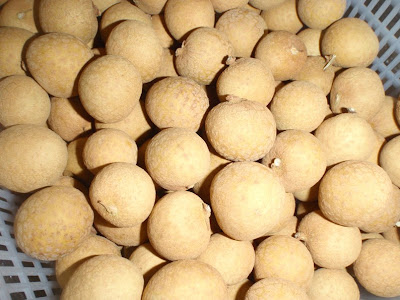 Today I made a plain ol' tomato soup and put it on the line with oyster crackers and shredded gouda cheese from New Zealand. Sold every last drop again... 25 gallons worth. Even the Head Chef came up to me and asked me what my secret ingredient was, I told her time. Just add the basic ingredients.... tomato, parsley, onion, butter, sour cream, garlic, salt, pepper, and tobasco and let it simmer for hours. Let those flavours come out and it's delish. The big guy from my boxing class last night told me his thoughts on all the soups, he said some are too ecletic like the apple-kumara soup I did a few days ago. I told him the vegetarian chicks dig that. Then he goes, well the station is mostly grunt guys who spend their day outside in the freezing cold weather and they want good, simple hot foods. Good point, I'll cut back on my craziness and keep it a little more simple. Shoot me some recipes Ma and Nannie! 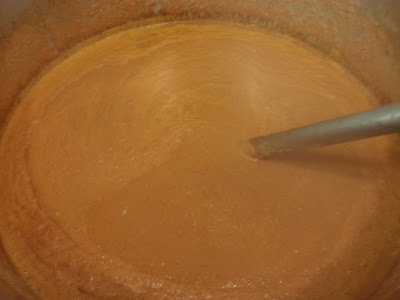 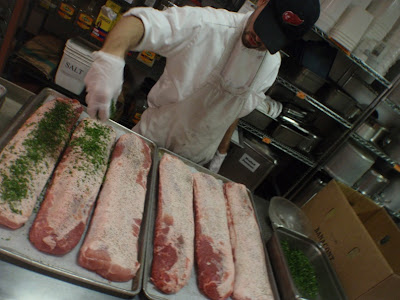 For todays citrus lentil and couscous blend I had to grate tons of blood oranges and limes, 2 hours worth. And out of the 10 pans I made they ate 4. These guys and girls aren't fans of lentils and either am I. Take it off the menu please. 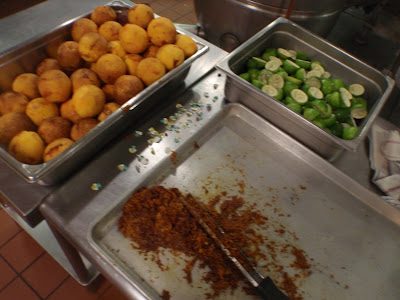 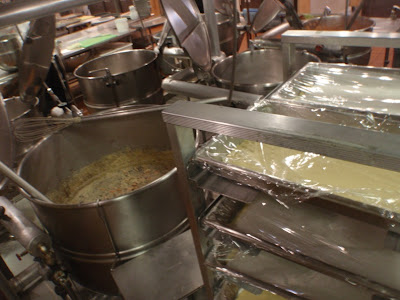 Meat acookin' in the oven. 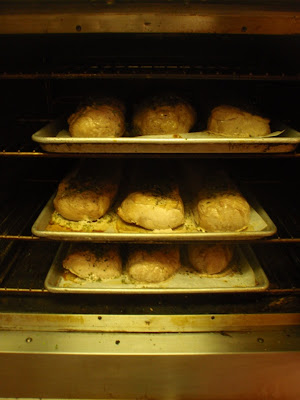 The citrus lentil thing I made. I tried to make it somewhat descent with nuts, raisins, and a rich cream sauce, but it still didn't sell. Don't blame 'em. 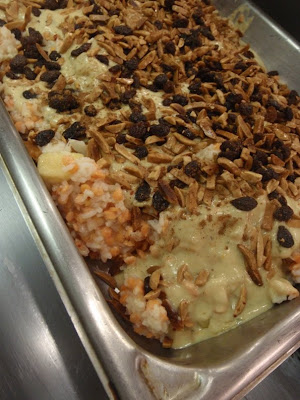 I love pumpkin anything. 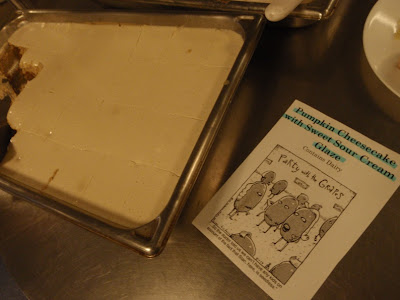 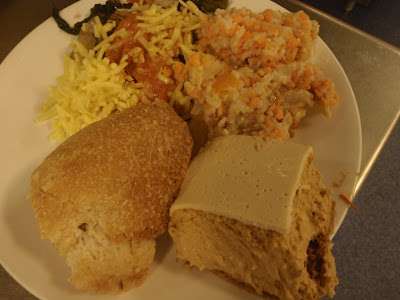 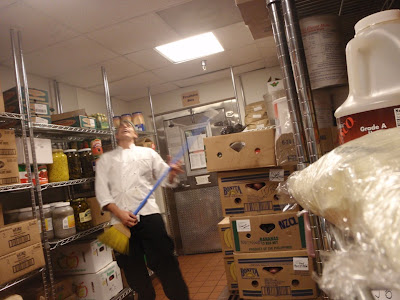 With the wind farm going in the engineers are having a hayday with the power system. Last night the power went off at 2 AM, then 4 AM, then 5 AM (had to keep resetting my alarm clock, finally totally lost track of time because there was no working clock anywhere nearby nor do I know the sun's cycle yet, so I got dressed for work and when I walked in I was 3 hours earlier, so I walked out, set my alarm clock again and back to bed), then the power went off again an hour before service (video below). They say it's going to go off again on Sunday sometime. Romantic.