While in the midst of the cloud forest in Costa Rica last year I came to the realization that I need to initiate a traveling cooking school that learns/documents sustainable cooking practices relating to native tribes around the world and integrate those practices into the mainstream developed culture. Yet, so far all I have been able to do is learn personally from the natives and reciprocate by providing them with tasty treats. It hits my heart when I see an eldery tribal man try a bite he's never been able to try and watch him smile with glee. It's illogical to say I like to cook for the poor, but instead I like to cook good meals for those who never get a chance to taste something different. Put aside those rice and beans and taste this man... medium rare steak, twice baked potatoes loaded with sauteed onions, garlic, bacon chunks and topped with white cheddar, caesar salad, civiche con tortilla chips, and raisin oatmeal cookies. Woke up to big clouds. 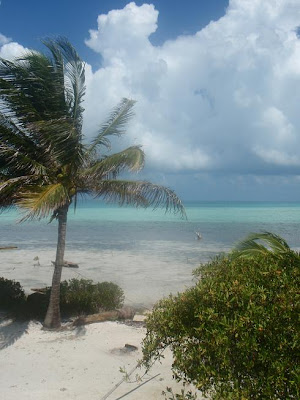 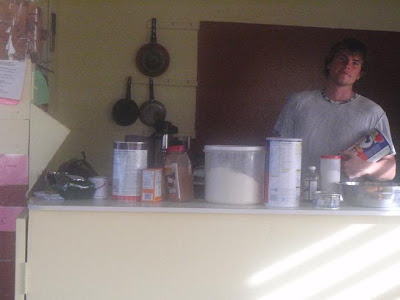 First I brought out all the ingredients they will need, and of course the Joy of Cooking cookbook. 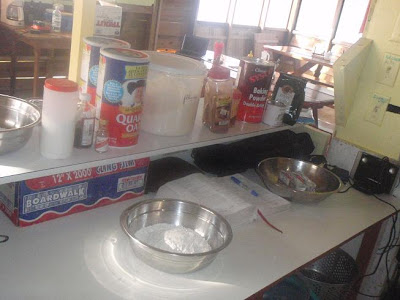 I began putting together the dry and wet mixes for the oatmeal cookies. The captain and watchman watched carefully. I have written down the recipes for them, but it's best for me to show them how to execute the recipe before they attempt to copy it. Belizieans use the same ingredients I use, but they put it together differently and get different results. 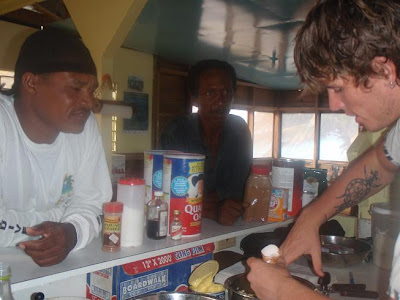 After that I added the fat raisins I asked them what else they want in it. Walnuts and shredded coconut they said... not a problem. I like to load this cookie mix with plenty of nuts and dried fruits to maximize the energy potential of the treat. Good food = good work. 6 hours of diving requires high energy, so I pack there goods with what they need to succeed. 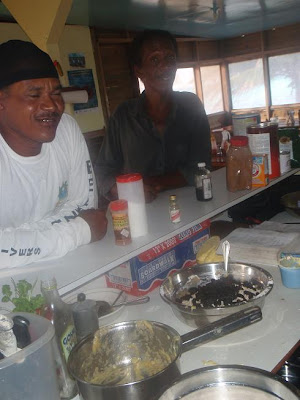 Once the cookies got to baking I began teaching Renata how to make my 3-layered cheesecake. To start I had her mix and bake a cookie recipe, which we later broke up and patted into a pie pan to form the crust. 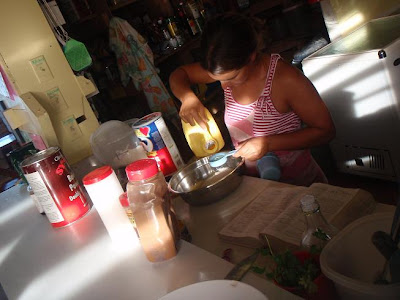 A half hour after I pulled the oatmeal raisin cookies out of the oven they were almost gone. 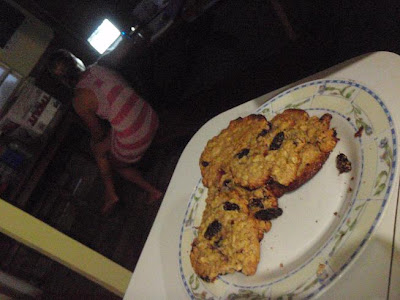 The cheesecake baked. We still have to top it, but you'll see that tomorrow. It needs to cool a bit more overnight. Good cheesecakes require patience. 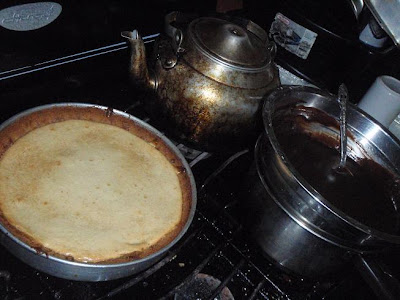 After looking at it I thought to myself that omitting the egg whites really gave the filling more body, more density. I like it. I really don't want to top it since it looks good as is, but I might as well just to show her how to do it. 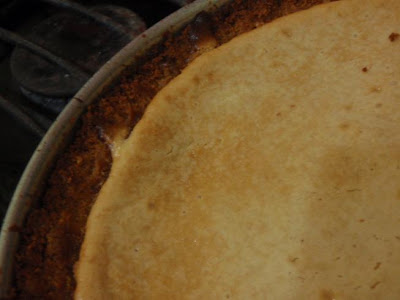 As the cheesecake cooled I got dinner together. Renata tempted Bry Guy, but he's our designated boat driver tonight so he no drink. For the next few nights we are going to follow the stingrays with a radar device. A data logger records their movement and all we do is listen to the pings. When the stingray moves we must move with it just to accurately record their movement. 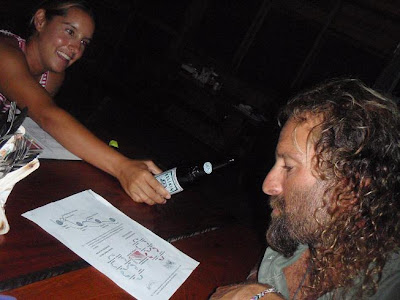 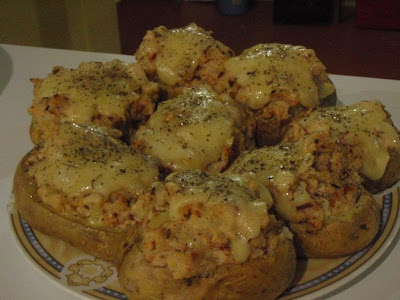 Two steak dinners for the stingray team listening to the pings. Delivery boy at yo service by bota. 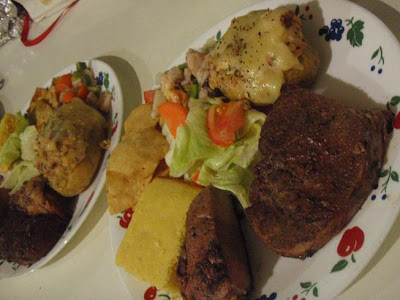 We carried the food to the boat. Two steak dinners, two steak knives, a bottle of A1 sauce, and a bottle of juice. 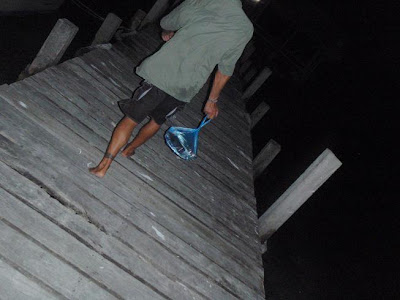 Off Bry and I go. We didn't bring a torch so we can't see crap. Just go man we'll reach them someday. 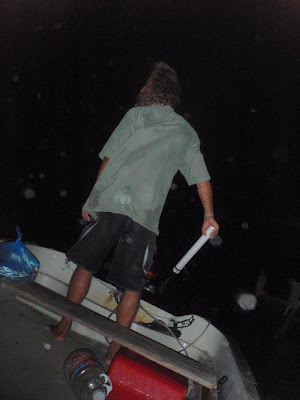 We made it to their boat by only hitting one reef patch and stalling out. Not bad given no torch. When we got there captain was watching the shooting stars and Mani was listening to the pings. 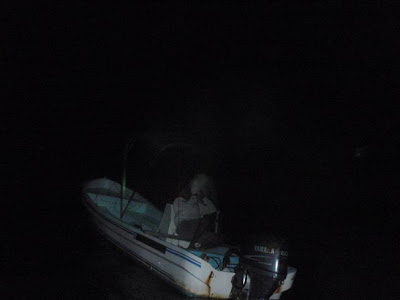 Every 10 minutes he records the direction of the strongest signal. The data logger records the coordinates of the tag automatically but we still need to know in what direction from our contact point the signal is comming from. 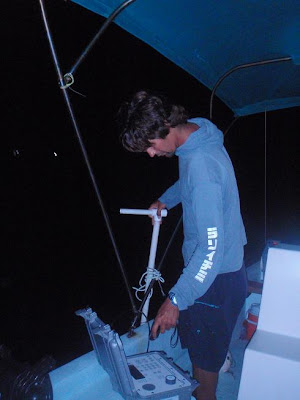 Then I gave them dinner. Happiness on board. 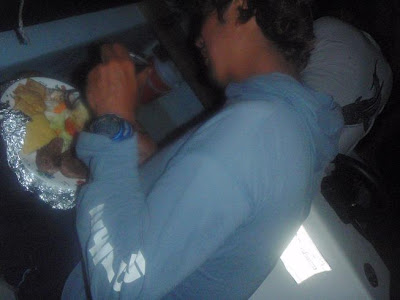 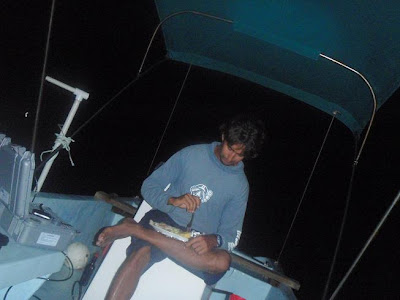 I decided to stay on the research boat and watch the shooting stars. 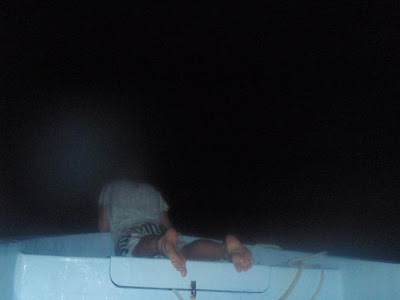