The City of Melbourne

Yesterday was the Northern Hemisphere's spring time full moon and the Southern Hemisphere's fall harvest full moon. Same moon, just different seasons at different ends of the world. I woke up to see her set, packed my bags, rendered a bit, and then Frank and I were off to the Sale train station. 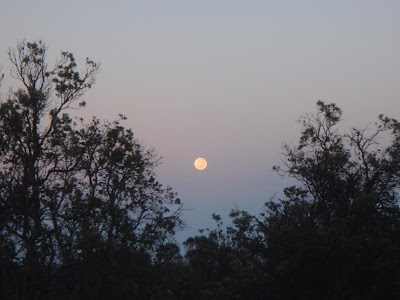 I gave my goodbyes to the bush and wallabies. 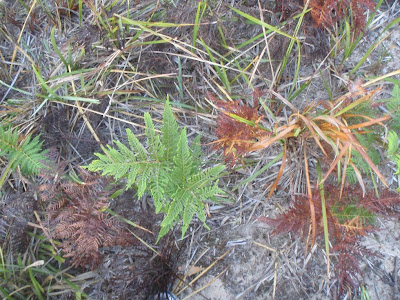 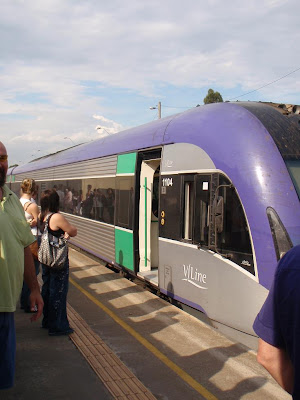 Off to the city... made up of streets, lights, pollution, cars, football games, trains, clubs, homeless, internet cafes, grocery stores, Starbucks, tourists, skyscrapers, machines and systems. Every big city I've been too (i.e., Vancouver, Toronto, New York, San Fran, L.A., Detroit, Chicago, Bangkok, Boston) has the same elements as any other big city. The only big change I notice in cities are the different nationalities living in different urban sectors and varying architecture. Thank goodness for diversity and architects. 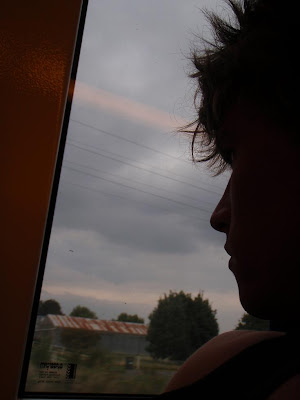 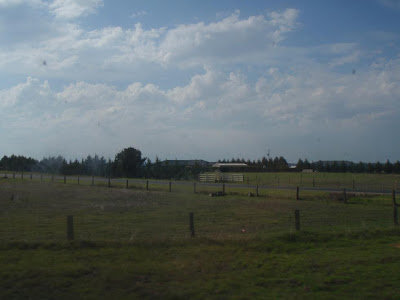 About halfway to Melbourne (1.5) farmlands were being uprooted and cleared. Powerlines were stretching for miles and roads were being built. 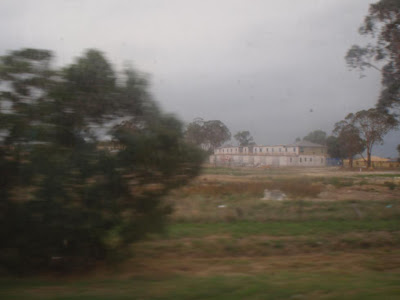 This brown coal plant (Thanks Frank) is probably the main source of energy for the developing infrastructures. I thought she was nuclear, but Frank says there are no nuclear power plants in Australia. I researched the fact, and all mined uranium is exported, mostly to the UK. 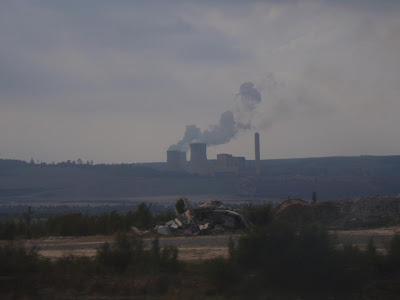 Then we started going past suburbia. 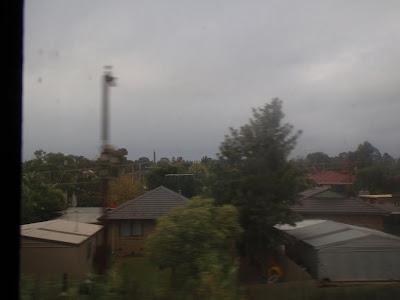 After suburbia we hit the old housing areas. The graffiti made the ride rather entertaining. So many stories were painted amongst the fences and walls. 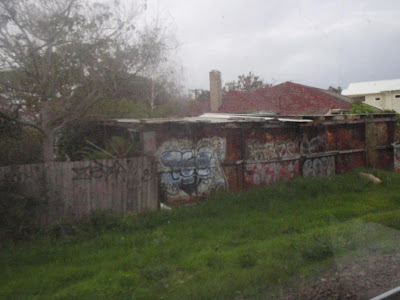 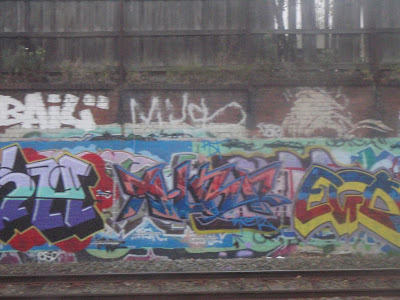 Here's Melbourne and the train yard. The city looks to be about the size of Cincinnati, Ohio. 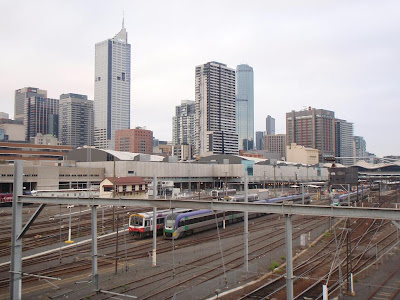 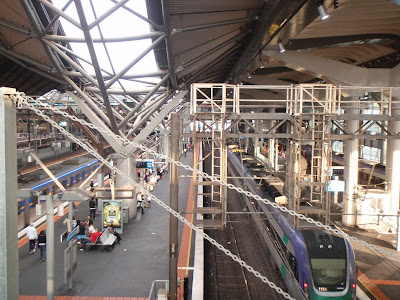 Here's Melbourne's main sports arena. If don't know what AFL is... check it out! The Australian Football League blows American foozball and international soccer away. It's one of the roughest games I've ever seen. 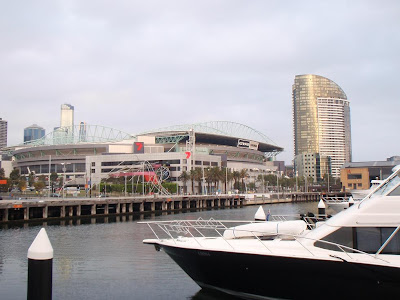 Next to the arena was Harbortown. It looks to be a new development with a luxury shopping center, ferris wheel, great fine dining restaurants and bars, yachs, mini-entertainment areas, etc. 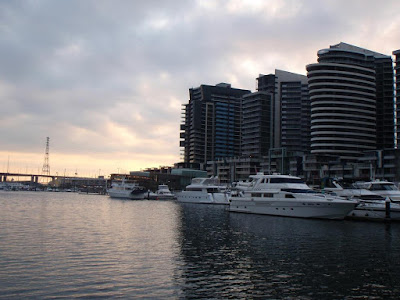 Folks told me that the ferris wheel is liked by some, and not liked by many. I've found that once a new large feature is brought to a city that changes the skyline the residents tend to not like the change at first, but after a few years it settles in and they get used to it. 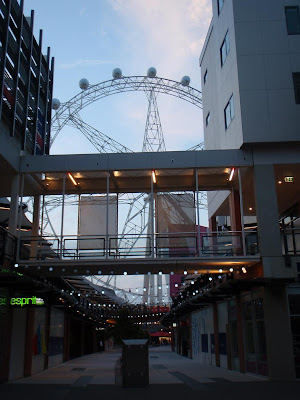 Just a taste of the Harbortown architecture. 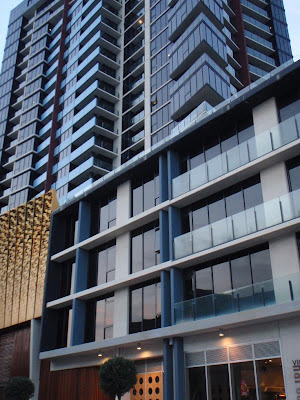 After my little stroll around town I grabbed a bus to my hotel near the airport. Planes, trains, and automobiles. 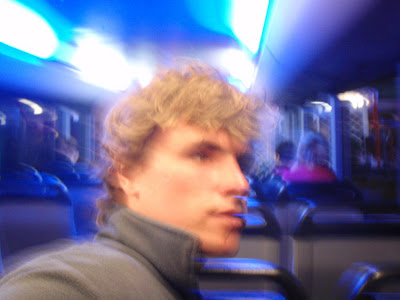 Here's the room at Formulae 1 hotel. Not a good room and the price was high because it's Easter weekend, yet it was the cheapest I could find. C'mon F1 where's the internet? Not there... so I had to take the bus back into Melbourne to hang at an internet cafe where I'm at now. There's some electronic music bumping on the surround sound system, I'm sipping cold tea with agui, ginseng and ginko biloba... blogging... cute girls sitting next to me... thinking about applying to NASA... trying to figure out where I can get some new clothes... this is pretty chill. 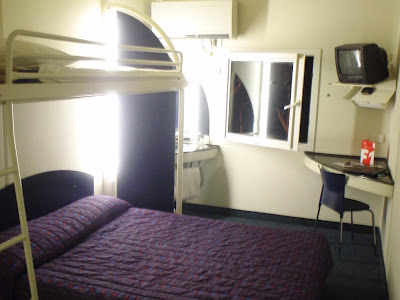 The hotel stinks, but hey, at least they have the Simpsons on t.v. If there are no big parties in town tonight I will just do some writing and watch Homer. I'm not a fan of t.v., but when you go nearly 6 months without it... it's nice to get a quick dose of the Simpsons or Cops or National Geographic. 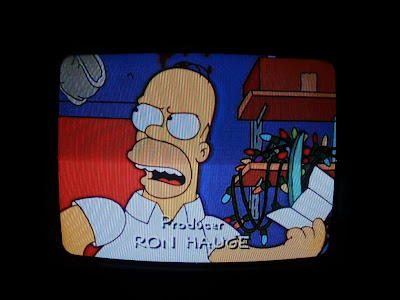 I'm entranced with sustainable/portable architecture right now. My buddy Drew has given me a proposition to do some research for him for an international architecture contest, so I'm putting together some of the lessons I learned from the bush. 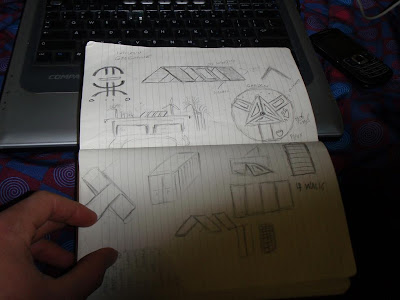