This presentation was put together by Karen, the infamous greenhouse technician. You rock Karen!!! 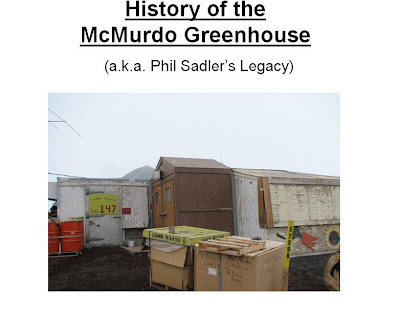 There seems to be a reoccuring theme here in Antarctica... you get a BS from some university in the the world, involving some kind of environmental science, then you migrate to Anarctica, bust your buttox in some random job (heavy equipment operator, cook, plumber, dish waster, carpenter general assistant, etc.) and if your lucky you can start using your academic skills on the Ice to empower the wellbeing of humans and nature. There are PhD candidates washing dishes, no joke. You have to be lucky and a returnee in order to move up the system and actually use your real deep-down talents here. This is my first year, I'm still just a kid with a BS in Physical Geography cooking dinner for 1000 people. I want to build the first off-grid greenhouse, tap into geothermal energy for heating, and put solar panels up on all the McMurdo roofs... but I have no voice here, I'm just a cook that likes to run and pick up rocks eh? 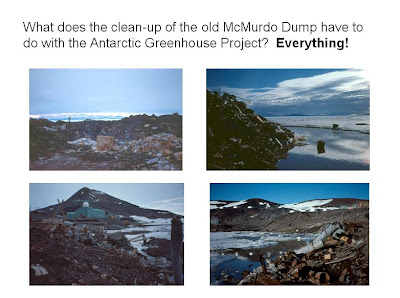 So ya back in the day, two decades ago, everyone just threw their junk right on the beach. Finally some governmental body told the McMurdo town to pick it up. Who knows where it went? A diver went diving by the pier last year, which can be seen in two pictures below. She said she hated and would come up covered in petroleum. She hated it because she had to swim through it, swimming through it disturbed it, and that spread the mess. There are reported tons of unknown barrels at the bottom of the McMurdo Sound. The nuke plant was dismantled a couple decades ago, and I think all the waste from that was just dropped into the sound. The waterbody right next to McMurdo is ranked as one of the most polluted in the world, I've heard people say it's one of the top 10 most polluted sounds/bays. What to do with the junk at the bottom of the pier and sound... leave it there. There is a geographical feature (a 'lip') surrounding McMurdo that encases a lot of the petroleum, tanks, barrels, and junk at the bottom. If no one touches it... it doesn't move and do much harm. So, that's what they are doing.
One guy in our group spoke about how in the 80s people used to have lotterys on dead cars and planes. They would take the old cars out on the ice before the end-of-summer thaw and make bets on how many day it takes before the car falls through the ice. They also did this with planes after they diwinged them. When I went out to the LDB (Long Distance Balloon) Centre I was shown several buildings that were up last summer, but have sunk into the snow/ice. Due to NSF budget cuts there is no high priority associated with cleaning up those buildings. So even in 2008, or should I say 2009, things are still just being left out on the ice to sink. But, good news is that tomorrow we have a town litter clean. 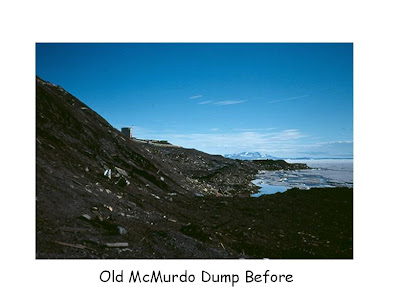 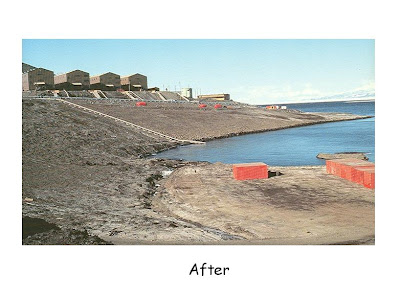 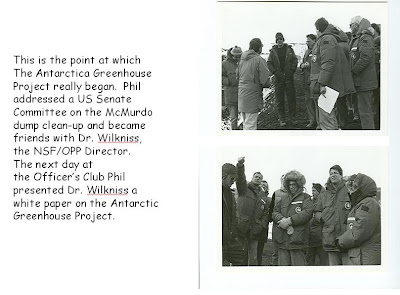 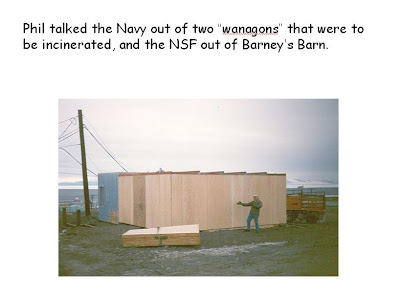 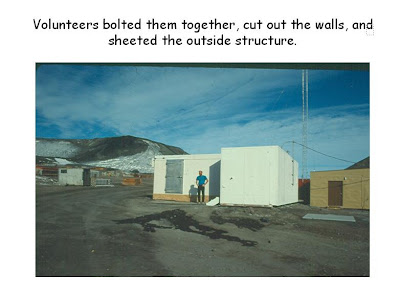 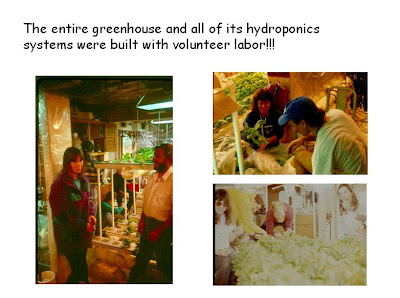 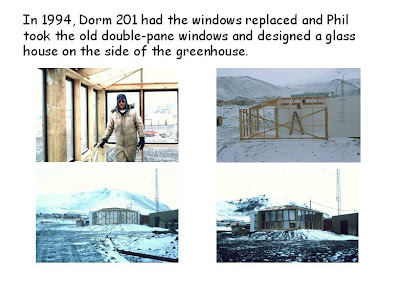