The 'Antarctic Tale of Cosmic Living' has finally been painted onto two 2' x 2' aluminum panels, which are the battery walls for the high altitude balloon ANITA. In 2 weeks, this shedding of my energy will be put up into space... 120,000 feet above sea level. Never have I ever been given the chance to put my art into space and from the start of the was contest I was determined to win. Success. Money is not the reward, the reward is that a piece of me will be drifting far above the clouds adding some vibrancy to a scientific experiment in search of the mysterious Neutrino.

The left panel has a few key elements:


-I borrowed facial Maori (New Zealand Natives) tattoo designs to create the sun and rays of space. For every piece of work I do I take the local native myths/designs/magic and implement them into the piece for the purpose of respect and acknowledgement. I did use the Inuit/Eskimo dot design for a few parts.
-Pele, Hawaiin Goddess of Fire, is arising out of the Mt.Erebus. She makes the land that life walks upon. It is also possible life originated from the vents stemming from Mother Earth's womb. Hawaii's native designs were brought in because the ANITA team is from Hawaii.
-Seed of Life is above Pele's plume. Seed of Life is an Ancient Egyptian symbol found in the temple of osiris. Osiris is god of dead, and in that temple was the seed of life; oxymoron. In death comes new life.
-The eye near the penguins is Mother Earth's eye, looking outwards into space.
-ANITA balloon is floating in between space and the clouds.
-The dots represent cosmic particles. Dots are being emitted from the solar/supernova face and are also trapped inside a few radiation belts surrounding the Earth.
-Penguins are pondering the whole cosmic dance.
-I'm a multi-dimensional being and that's rather easy said than done. Try to draw 4-D or 5-D without computer help... nearly impossible using 2-D mediums. What I tend to do is draw layers and layers using lines, dots, spikes, etc. to bring the idea of multiple planes down to 2 dimensions. Follow the flow: Sun/Supernova > cosmic particles mixing with rays from earth > magnetic belts > stars in background > ballon in Stratosphere> clouds + smoke plume > continent > ice/water > penguins. The goal is to bring the highest form of existence (the Creator) face to face with the most basic form of exisence (Life). 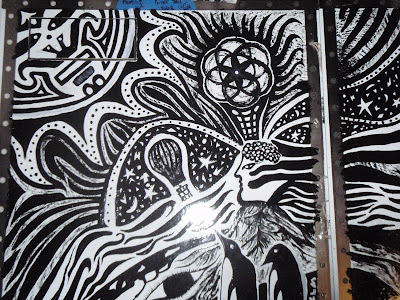 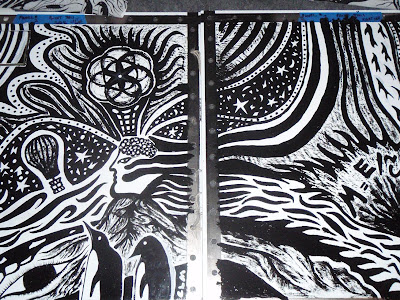 Nothing too special with the right panel other than dude :) creating the whole cosmic reality with one simple world renown equation: e=mc2. Since I had to conjur energy from above to produce this material piece I decided to switch it up to m = e/c2. Matter is equal to energy divided by speed of light. Using my brain, I slow down the eternal cosmic energy and channel it through my hands, holding a paint brush, to produce a piece of Earthly art. The Creator speaks through you in many ways. If needing help, ask and you shall receive. Magic is knowing that anything possible, even the impossible. 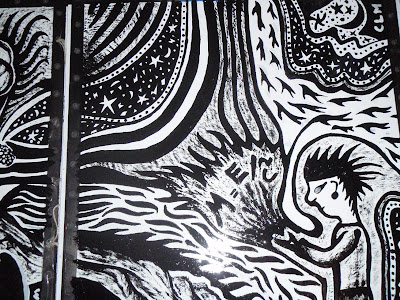 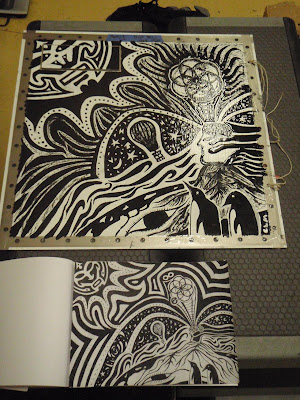 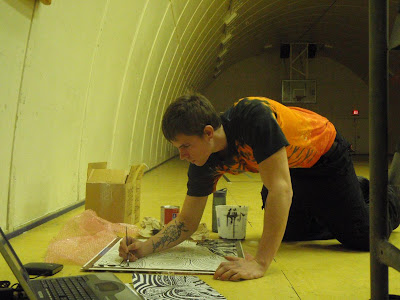 This was Saturday night's work. I was in the gym until 2 AM and only got this far. It frustrated me because I knew I only had 2 days left to finish this panel and do a whole other panel. Sunday night I learned to put the frustration aside; if doubtful, play with a ball and run in circles. 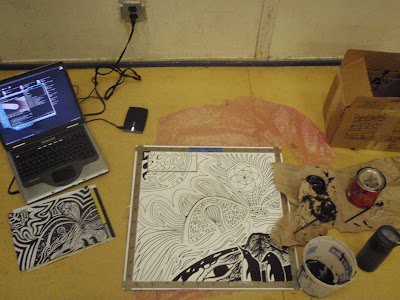 At first I didn't like the paintbrushes. I haven't painted anything since gradeschool. I'm a drawer and a guitarist, not a Picasso. But I guess I'm evolving. For the first bit I just used my knife because it allowed me to make nice and straight edges, but it took forever. I tried using everything from pens, pencils, knives, brushes, carboard, and paper to paint. 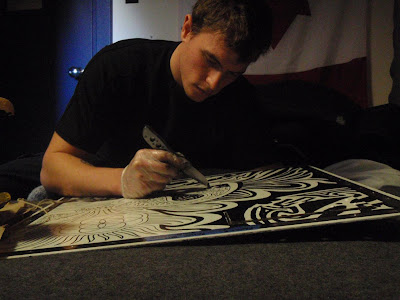 This was at 6 AM Tuesday morning, panel 1 finished. It's currently 10 PM Tuesday night, panel 2 is finished. 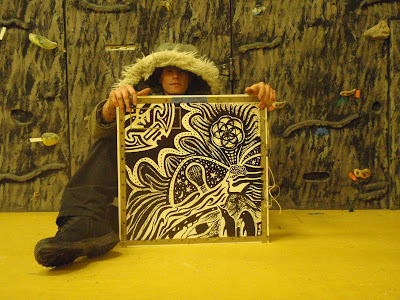 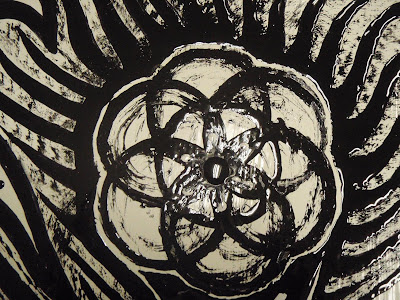