Secondly,"The signature of such events is the observation of an enhanced detection rate that is strongly energy dependent. This observation would provide evidence of new phenomena, such as the existence of extra dimensions." (Silvestri, 2004) It is possible that ANITA may help physicists prove that there are extra dimensions. Theoretically there are 10 or so dimensions, but evidencing all the dimensions has not happened just yet. Basically this experiment will break or verify certain laws in physics dealing with high energy particles, i.e. GZK cutoff. 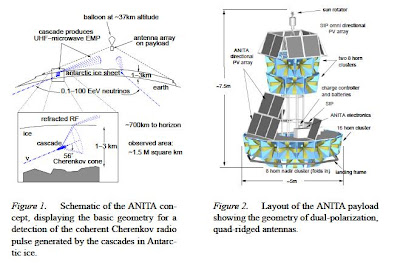 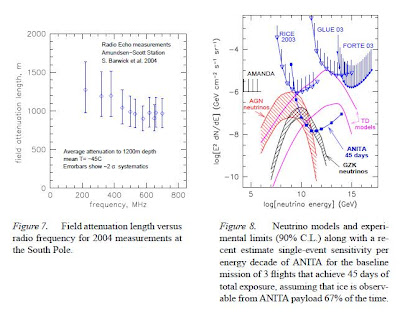 "
Introduction
ANITA is designed to search for particles that are created in the most powerful environments in the universe. Its primary goal is to discover neutrinos generated by interactions between the highest energy cosmic rays and the cosmic microwave background radiation, as well as neutrinos created at the inner edge of supermassive black holes (SMBH). Flying at an altitude between 35-40 km above the Antarctic continent, the ANITA balloon-borne telescope will be sensitive to a target volume of  106 km3 of radio-transparent ice. The aperture of ANITA exceeds  100 km3·sr at E = 3× 1018 eV, averaged over neutrino flavor and assuming equal fluxes of all flavors. The aperture continues to grow rapidly as E increases, reaching the order of 105 km3·sr at E = 1021 eV. At EeV energies, the Earth is opaque to neutrinos so only horizontal or slightly downgoing neutrinos are detectable (Fig. 1). Neutrinos interact within the ice and generate compact particle showers, which emit coherent radio signals that are detectable in the radio-quiet environment of the Antarctic continent.


1. Science Goals
Standard Sources. High Energy neutrinos carry unique information from objects in the universe, and complement the information provided by UHE - ray astronomy. For example, neutrinos, unlike photons, can propagate throughout the universe unattenuated, but photon astronomy between 10-100 TeV is limited to distances less than a few hundred Mpc due to interactions with infrared background photons, and to even shorter distances at PeV energies due to interactions with the cosmic microwave background. Neutrinos may be the only method to shed light on acceleration processes associated with sources of the highest energy cosmic rays, which extend more than six orders of magnitude above energy of 100 TeV. Thus, the direct detection of high energy neutrinos (Stecker, 1968, Berezinsky and Zatsepin, 1969, Stanev, 2004) will complement the investigation of the GZK cutoff (Greisen, 1966, Zatsepin and Kuzmin, 1966, Kuzmin, 2004), one of the most controversial issues in cosmic ray physics.


Several theoretical models predict neutrino emission related to accreting SMBH, which arise from particle acceleration near the black hole at the center of AGN (Mannheim et al., 2001). In this environment ultra-high energy protons may escape from the source, and a fraction of them eventually interact to produce high energy neutrinos. Therefore, high-energy cosmic-ray observations can be used to set a model-independent upper bound on the high-energy neutrino flux (Waxmann and Bahcall, 1999).


Physics beyond the Standard Model.
The ANITA science goals extend beyond the Standard Model if GZK neutrinos produce highly unstable micro black holes (BH) when they interact with ice (Feng and Shapere, 2002, Alvarez-
Muniz et al., 2002). The decay of these highly unstable micro BH via Hawking radiation would generate energetic hadronic showers that ANITAwould detect. The signature of such events is the observation of an enhanced detection rate that is strongly energy dependent. This observation would provide evidence of new phenomena, such as the existence of extra dimensions.

2. ANITA
The concept of detecting high energy particles through coherent radio emission was first postulated by Askaryan (Askaryan, 1962) and has recently been confirmed in accelerator experiments (Saltzberg et al., 2001). Particle cascades induced by neutrinos in Antarctic ice are very compact, no more than a few centimeters in lateral extent (Zas et al., 1992). The resulting radio emission is coherent Cherenkov radiation which is characterized by a conical emission geometry, broadband frequency content, and linear polarization. ANITA (Barwick et al., 2003a) will observe the Antarctic ice sheet out to a horizon approaching 700 km, monitoring a neutrino detection volume of order 106 km3... events should correlate with ice thickness, averaged over observable volume. As illustrated in Fig. 1, ANITA will search for radio pulses that arise from
electromagnetic and hadronic cascades within the ice. The signals propagate through 1-3 km of ice with little attenuation. At the energies of relevance to ANITA, the Earth strongly attenuates the neutrino flux, so ANITA is primarily sensitive to horizontal neutrinos. A radio pulse with zenith angle

6. Conclusion
ANITA will use radio emission from the cascade induced by a neutrino interaction within the Antarctic ice cap to detect UHE neutrino interactions that occur within a million square km area. The remarkable transparency of Antarctic ice to radio waves makes this experiment possible, and the enormous volume of ice that can be simultaneously monitored leads to an unparalleled
sensitivity to neutrinos in the energy range of 0.1 to 100 EeV. Three separate flights provide 45 days of livetime, which can be increased by multiple orbits around the South Pole. It is possible, under optimal conditions and the use of multiple orbits around Antarctica, to obtain an integrated livetime approaching 100 days. In December 2001 the TIGER instrument obtained a record 31.8 day flight by circling twice around the Antarctic continent. Even the first ANITA flight will constrain model predictions of GZK neutrino fluxes and provide insight to particle physics at the energy frontier.

Acknowledgments
This research was supported by the following agencies: NASA Research Opportunities in Space Science (ROSS) – The UH grant number is NASA NAG5-5387, Research Opportunities in Space Science – NSF and Raytheon Polar Services for Antarctic Support – NSBF for Balloon Launching and Operations – TIGER Collaboration for allowing ANITA-lite to fly as a piggyback – NATO Advanced Study Institute for providing the Full Scholarship at Erice.
"

Source
Silvestri, A. STATUS OF ANITA AND ANITA-LITE. The ANITA Collaboration. 2004.