The Ice is Being Broken down by the Pier

The 'American Tern' Cargo Ship is on its way and to prepare for her arrival an ice-breaker has been cruising the McMurdo Sound making a shipping channel.


Although it carries 1000 TEUs of containers, the vessel is actually classed as a general cargo ship, and its holds can carry bulky and extra-heavy items such as vehicles, construction equipment and materials, pipes and other things needed by the National Science Foundation to build and maintain its research stations in Antarctica. Because McMurdo’s dock lacks gantry cranes, the crew relies on the American Tern’s two cranes (one with a 60-metric-ton-capacity, and the other with a 40-metric ton capacity; in tandem, they can lift 90 metric tons).
The ship is categorized as “Finnish Ice Class 1A,” one of the higher ice-capable ratings for commercial vessels. Although it’s “ice-classed,” the American Tern is not an icebreaker; it needs one to escort it and plow through the thicker ice while it follows close behind. Even so, it needs to push aside the broken ice, and is built to be especially strong for the difficult going."

This photo was taken not too long ago. Everday trucks are hauling containers down to the pier and that area is now off-limits to the general population. 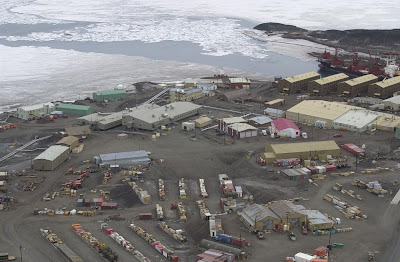