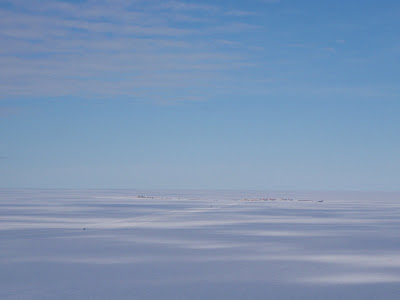 A couple days ago I received an email from the ANITA (Antarctic Impulse Transient Antenna) lead scientist saying that I've been awarded the 1st place prize for a drawing I did last weekend (Under blog post 'Work in Progress'). The drawing will have to be copied using black acrylic paint and put onto a 2' x 2' steel battery panel for the giant ANITA instrument. A piece of my imagination is going to floating 128,000 feet above seal level in a couple weeks, so awesome. Yesterday I came across a LDB facility tour poster and decided to sign up just so I could get a run down about what the LDB programme does and more importantly what are they looking for.

The LDB complex has about 6 main buildings on skis. 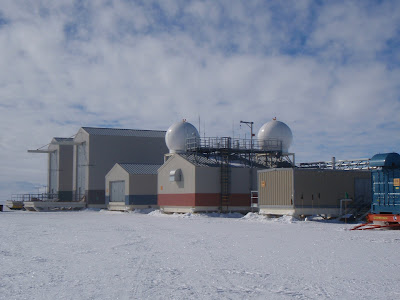 The ballons are huge. When at the surface they look like they're not too filled with helium, but as they rise up they expand as the interior pressure matches the outside atmospheric pressure. 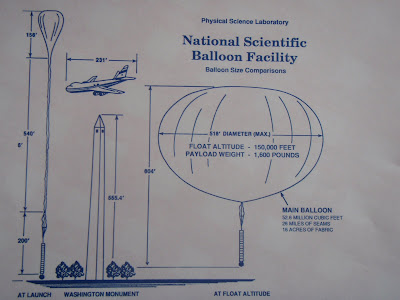 Here is the LDB galley, which has a few tables and a kitchen. 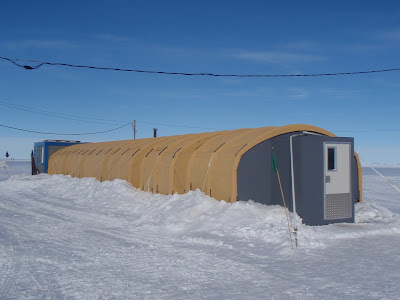 The generator. All the heat from the diesel generator heats the two main LDB buildings. No extra heat is needed to be produced. 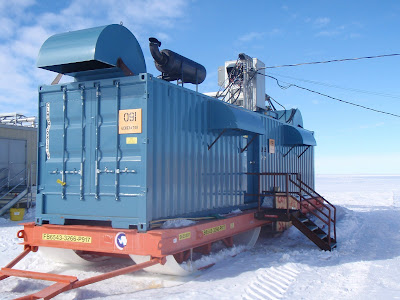 The telemetry facility. These instruments allow scientists to maintain contact with the ballon as it does it's ~40 day journey around Antarctica. They can see instrument data as well as take pictures. When the balloon reaches max. altitude you can view about 15% of the entire ice/land mass of Antarctica. The average air pressure at it's max. altitude is 4mb. Very little air mass in the stratosphere and it is also very hot since the sun directly pounds the ballon without any obstruction from other air molecules. The ballons are never reused because of the wear and tear they recieve from the ultradirect sunlight. 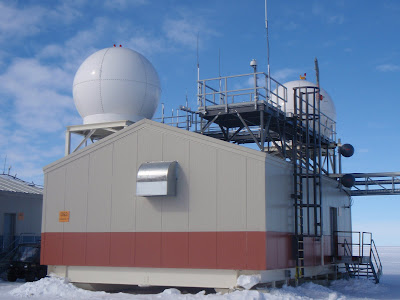 Inside the telemetry building. 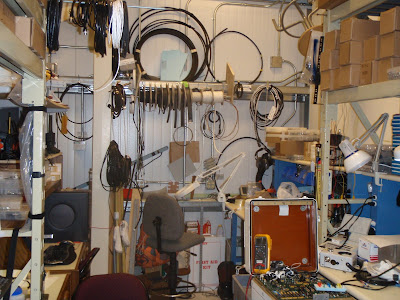 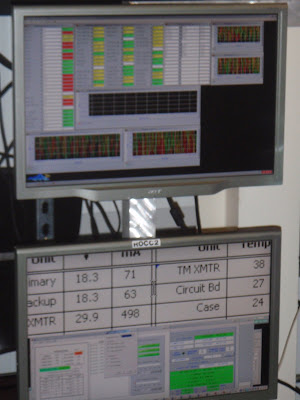 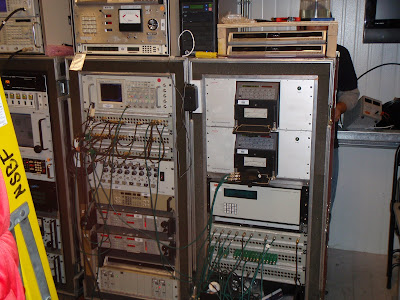 I'm assuming they need to create radio waves via the guitara just to test the ANITA radio wave detection instruments. 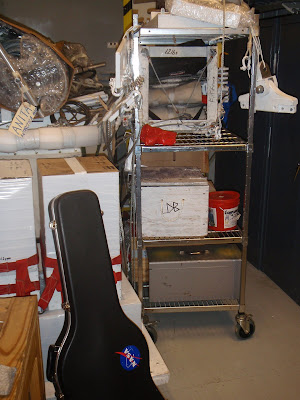 The CREAM (Cosmic Ray Energetics and Mass) core insturment. It is sponsored by France, Korea, America and Mexico. 45 scientists from around the world are working on it. It works by using a silicon detector and a few other detectors to observe high energy particles. With the instruments they can figure out what the energy of the particle is and what type of particle it is (i.e. muon, quark, etc.) When a high energy particle comming from space reaches the tip of the Earth's atmosphere it begins to break down into a shower of other smaller energy particles. The CREAM detectors observe the break down by capturing the particle masses in a capturing device. They can observe everything from the proton to the ion. Higher the energy of the particle, the more rare it is. Worst case scenario for the CREAM computer, an ultra-high energy particle crashes into the silicon detector and overloads the computer's CPU. 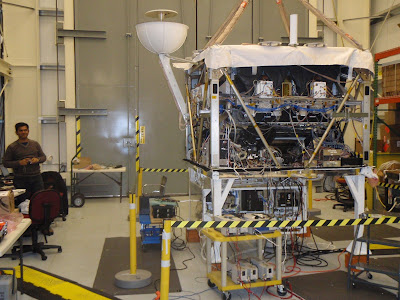 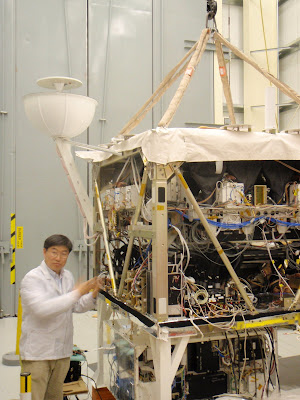 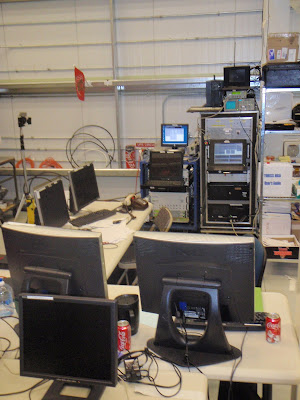 Both ANITA and CREAM teams are hoping for a min. 40 day balloon flight. The longest flight yet has been 42 days. After the ~40 day flight the balloons end up within a 100 sq. miles from where they were lifted off due to the anti-cyclonic wind patterns of the Antarctic summer. If they are still operational when they return it possible to keep the balloons in the air for a second or third loop. The record number of onsecutive loops has been 3. 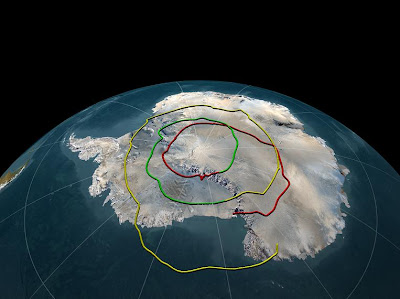 CREAM seeks cosmic rays, ANITA seeks neutrinos. CREAM detects particles by capturing their energy masses, and ANITA detects neutrinos by zeroing in on a rare group of radio (Askaryan) waves being emitted from the ice. A neutrino will collide with a proton in the ice and create a large shower of particles, some of which will be in the radio spectrum. Radio waves comming from uninhabited locations in Antarctica with strong impulses are pinpointed and observed by the ANITA antennas. Several readings from a radio-hot location will help scientists find out where in the universe those neutrinos are comming from. Sources of neutrinos are anything with nuclear reactions... supernovae, sun, black holes, quasars, and nuclear bombs. Neutrino observations from the sun can show the state of the sun's nuclear processes. There are also probably many unknown sources. 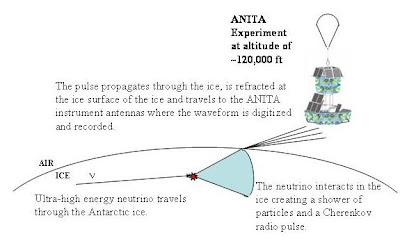 Source: NASA. ANITA Experiment. Accessed 11/23/08. http://www.phys.hawaii.edu/~anita/web/index.htm
ANITA picks up all electronic electromagnetic frequencies (EMF) at the radio band. Everytime someone starts up a truck at McMurdo ANITA will hear it. Everytime you turn on your iPod, ANITA will hear it. This ear will it all, and since radio junk is all over this place (especially McMurdo) they have to look for radio bursts comming from remote locations. Not only do the collisions of neutrinos with quarks or electrons create a burst of radio waves, but there may also be a flash of light. If you saw this event in the ice you could see and hear it, and perhaps your DNA would feel it too. Astronauts were the pioneers in finding cosmic rays because when they closed their eyes they would sometimes see flashes of light. HF cosmic particles were hitting their retinas. The way it works is the neutrino will knock an atomic or subatomic particle (i.e. quark or electron) out of it's orbit around the nucleus, causing it to spill off other particles in attempt to get back to it's regular orbit position... this event creates a shower of lower energy particles. The force holding the subatomic members in place is stronger than the force of gravity. As Peter Groham said... NEUTRINO + QUARK ==> X. X is like super energy.
The volts of a neutrino is a billion^billion. Flashes and particle showers are what occur when billions of volts crash into an Earth nucleus. There are three types of neutrinos: muon, tau, and electron and each type has the potential to switch it's identity. The craziest thing of all is that in every cubic centimeter of space there is at least 300 neutrinos. Why can't we detect them? They are going at speed of light and are neutral particles. Their neutrality means that they don't interact with any other matter or energy in the universe, unless on rare collisions, which is what scientists are in search of. We only see 4 out of the 10 dimensions and behind many of the 'real' stuff lies even more complex and surreal realities. Billions, if not trillions, of neutrinos have zipped past your nose by the time you've finished this sentence. ANITA has had some peculiar detections, but so far it has counted 0 neutrinos. This means a lot for NASA physicists because if we cannot find any particular radio waves comming from neutrino collisions then the theories behind the physics and/or instruments are wrong. After this year, if there is still a no-show on the neutrinos, scientists will have to tweak their theories and practice and start all over. The front line of cosmic science is right here in our front ice yard... not only are new events taking place, but so are new ideas being born that will forever change some of the claims found in science.
In the early 1900s Nicola Tesla sought to trap these high energy particles and use them to power our electrical networks with his inventions. Idea: capture a neutrino, downgrade it, convert it, transform it, and use it to power your electrical needs. It takes one to think of out the box in order to see and hear out of the box. Right now all we are doing is trying to see/hear neutrinos. It's too advanced in this day and age to actually get our hands on this high energy cosmic goo and put it to use. Even though, I think we use it everyday and are just unaware of it. I think we are multi-dimensional beings accustomed to living in a 4D space environment, let's evolve and see past Maya. 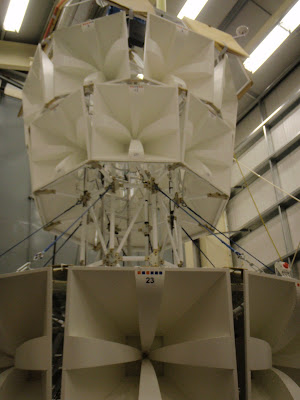 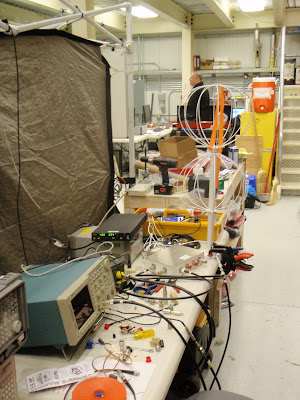 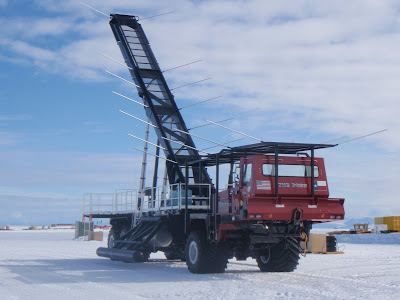 My final question to the ANITA scientist: "So do neutrinos have anything to do with dark energy/matter." His response was that we don't know, maybe there is some overlap between the two ideas. Maybe neutrinos share a counter-partner, or anti-neutrino. So far they've proved that neutrinos do in fact exist, but that's about all we know. Where are they? How can we play with them? What do they tell us about creation? The more you know the more you know you don't know.