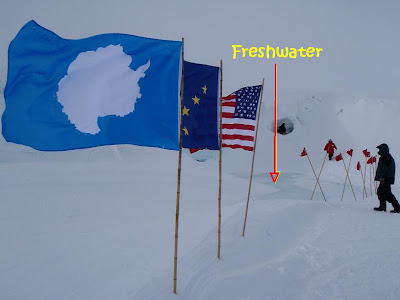 I've decided to keep a log of how much water we're using for each shift at the Runway kitchen. I put a long strip of tape on the 500 galloon freshwater tank and am having each shift mark the water line after each meal. On average my Lunch and Dinner crew are using only 20 gallons of water, which ain't too much considering we have to produce lots of coffee, juice, tea, ice, do dishes, and clean. The water guy came in today to check out our water status after Saturday's giant leak (the winter-ice valve thawed and water poured out of the side of the building, the Air National Guard guys said it was their Saturday entertainment) and I asked him where the freshwater comes from. He tells me that there are two types of freshwater... RO... and RRO. First, they take a giant chunk of ice out of the McMurdo permanent icesheet. The ice is rather salt-free because the force of gravity pushes salt to the bottom of the icepack (f(density)). As the upper layer of the icepack mass builds the brine gets pushed further downwards, most of this sinking is a result of gravity. Saline water doesn't freeze and is more dense than freshwater, thus sinks. The freshwater ice remains at the top and that's where they scoop. They then melt the ice and perform reverse-osmosis and desalination on it and this makes it drinkable. The RRO water takes about a month to make 500 gallon and is ultra-ultra-pure. It is used solely for science experiments.

The last thing he tells me is, "Hey you know how the Eskimo got their freshwater? They simply went to the melt ponds near the shorelines, where the top layer of the freshwater ice was melted." So, if your stuck out on the ice and need freshwater, find a melt pond or find a dark object with a low albedo that will melt the snow for you.
by Cody
Newer Post Older Post Home
codyleemeyer@gmail.com