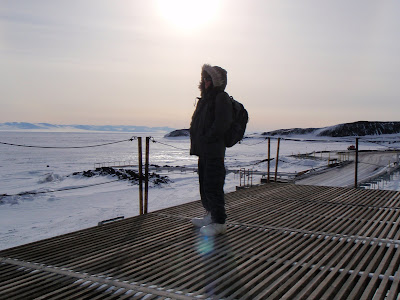 After a long days work I journey around the town. Ice, mountains, machines, trailers, humans in giant red parkas, a few rocks and the sun is nearly all that exists.... for now. Today I came across an interesting UK report on the Building 155 hallway discussing climate change and it's effect on Antarctica Immigration. In summary, as the icey continent warms scientists predict that many migrants from many nations will move here (prediction: 1 Billion by 2040 with current temp. rise and melting rates). That's unfortunate because even Mother Nature hasn't had an upperhand in establishing a vibrant plant community, and animals are few and far apart. Technology will allow us to cheat and survive, in masses, if societies deepen their aspirations of growth on the this land. What may happen is communities will continue to expand upon their current station inrastructures, and if the Antarctic Treaty expires then those countries may establish 'legit' territorial rights. Nations have already made the territorial claims, but aren't recognized by any other nation on the treaty they signed. "Article 4 - does not recognize, dispute, or establish territorial sovereignty claims and no new claims shall be asserted while the treaty is in force." If landownership does become feasible, each will mark their boundaries in accordance with their own laws, and conflict and competition will most surely come about as it has in the past whenever two or more nations seek the same resources (minerals, freshwater, land, etc.). So, as one of the first migrants, I ask the international community to keep the Antarctic Treaty alive and furthermore establish an International Peacekeeping and Protection Agency for Antarctica in alliance or under command by the U.N. ASAP. What we have right now is an international group that comes by to each station and makes sure each is in accordance with the treaty. The treaty is the only thing keeping this place protected from civil, commerical, industrial, and military abuse. There needs to be more UNITY. Save the Whales. 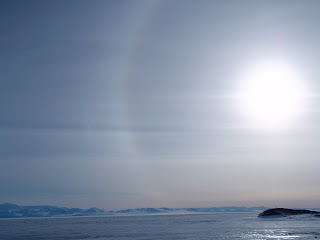 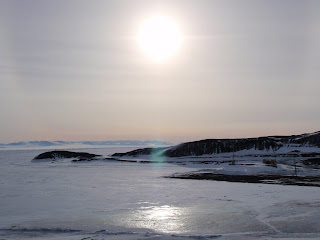 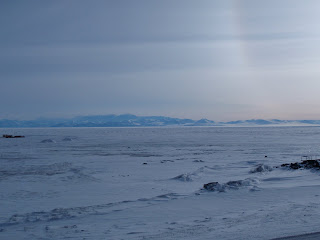 The most humbling thing this evening was going for a chilly hike and reaching down to grab the rocks for the first time. Instantly grounded.
by Cody
Newer Post Older Post Home
codyleemeyer@gmail.com