My last couple days in the kitchen

Next Wednesday I will start Runway, which means no more hardcore cooking for 10 hours in the kitchen. It kind of stinks because I'm starting to really get into the flow of the kitchen and can now be more creative with the food since I know more about the big equipment and ingredients on hand. At least I won't be sweating so much, it's like a sauna most of time being next to all the ovens and hanging over large skillets of pork/beef/chicken. Now that I got my feet wet and Chef knows I can cook on the fly, I think he's shipping me out to the trailer park because he knows I can handle the cold, manage small kitchen scenes from previous experiences, and deal with odd situations (i.e. a category 1 storms pops up and I will be at the trailer until the fire department gives me the clearance to leave).I'm going to miss the kitchen somewhat, but I won't be out of it forever, there will be a couple hours during each day when I may have to prep for some meals, but I won't be doing production. I'm employeed as a Prep Cook, but have been doing Production work ever since I arrived. I ain't asking for a raise because learning the Production side has been a blast. I can now use tilt skillets, steam kettles, many ovens at once, and cook up several hundred lbs. of main course meals within a two hour stretch. It's been a priceless cooking class. Even though I am doing runway, I will still have to go through all the Thursday safety courses, which are quite antic at times. Today our Superisor Jen was asking how we should break this certain box, and then Chef jumps up real excited just to stomp on the box. You just had to be there to see Chefs passion in tearing apart the box. 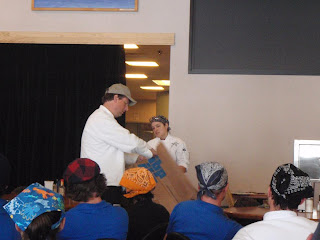 Sous Chef Linda has been my 35 year old NY sidekick. Half the time she is yelling at me to do this and do that, but that's the way her and I communicate. Think of an over stressed yankee and a chilledout southern boy stuck side by side, that'd be us. She directs me with every move and I get it done quick with excellence. Yesterday she gave me a Tempeh recipe for me to cook on the fly. I made a few boos boos, like putting corn starch in the hot veggie sauce, but after all the fun and games I had 10 sheet pans of amazing Tempeh. After lunch the Supervisor said that it was some good Tempeh, and I agreed. I told 'em I can cook good food, I just ain't really used to all the big equipment and lightspeed we got to work at... I'm just getting out of my Tico Time routines from my Chef job in Costa Rica. Time was much more slower there. Here Linda is telling me to quit taking photos of myself and hurry the heck up. 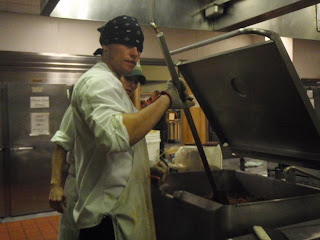 We got a crazy, diverse team in the kitchen. Here's all the boys putting together 500 pizzas in less than 2.5 hours. My next crew I will be working with be two dining attendants , and I will be putting the food out or cooking directly in front of the Air crew who've been on the ice for long hours. Chef tells me... burgers, lots of burgers of sometimes. It would be a pleasure Chef. 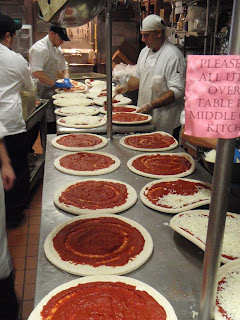 I will still be getting the unlimited cinnamon buns and maple-walnut sticky buns. Yes! 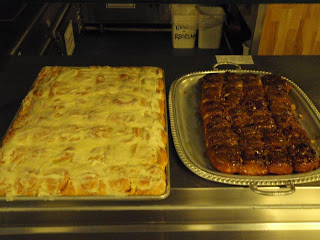 I look back after these two weeks. Sure I have never had mass production experience, more or less just mass prepping experience. I didn't sign up for mass production in the first place. But, they threw it at me, and I've gotten 'er done and I feel I got more esteem now. Everyday's been a lesson, a lesson in the culinary arts and a lesson in life. I must thank Joe and Pat back home in Cincy for giving me a taste of what sanitation, speed, and taste are. The late nighters sitting over the skillet listening, smelling, seeing, feeling, and tasting the egg after egg has paid off. The biggest tip of all... what's good food is what you enjoy. I knew that my Tempeh was good because when I ate it I wanted more. Let the gut and tastebuds do the judging. And Nannie, today I finally got to use that bread knife to make 500 slices of baguet for meatball subs, I knocked out the subs in a halfhour. Thanks. Time for dinner. 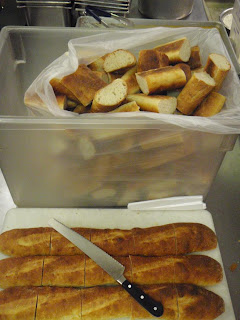