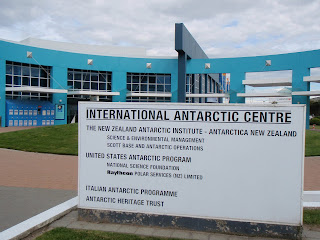 The final lag of this Antarctica journey begins here at the International Antarctic Centre in Christchurch, New Zealand. After a few briefings we had lunch in the tourist center. It was really neat to see folks who were departing to Antarctica in a few hours dine with international tourists. We were in fact part of the attraction. After lunch, we got fitted for our clothing. 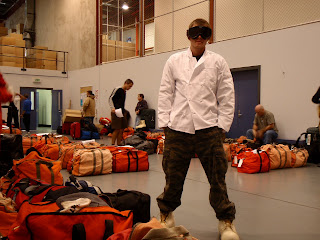 It took us about an hour or so to try on and exchange the work gear. After that we proceeded to the departure terminal to get checked in and searched by a couple dogs. 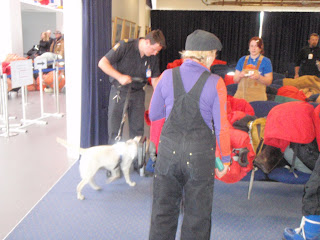 From there we hopped on a C17 I believe. It was a big military cargo plane with the majority of the seats along the walls. Surprisingly it was a very comfy ride, and they gave us a really good packed lunch made up of candy from Belgium, energy bars, granola bars, a sandwich, and a big bottle of water. 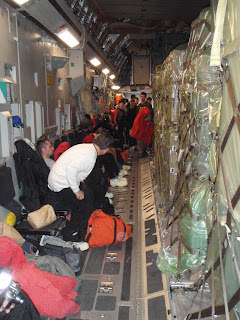 30 minutes after take off I began to notice little ice chunks floating in the Pacific. 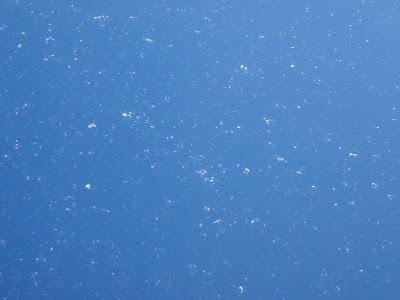 Two hours after that it turned into giant ice chunks. 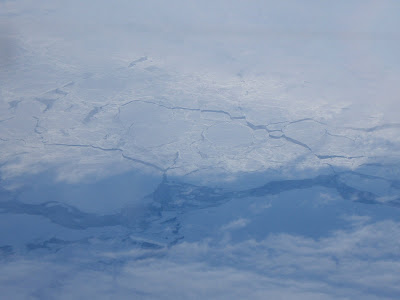 After about 5 hours flying the pilot gets on the radio and tells to button up cause we're going to land. 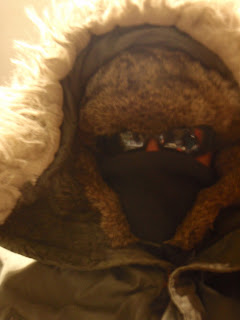 We land and board a snowcat taxi. The ride takes about 30 minutes to get to MacTown since the speed limit is 10. 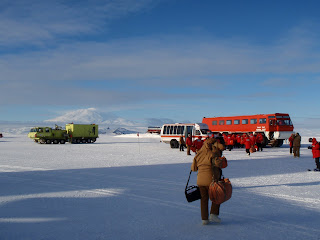 This is the nearby volcano. The flat white surface in front of the volcano is ice. We were cruising on ice. 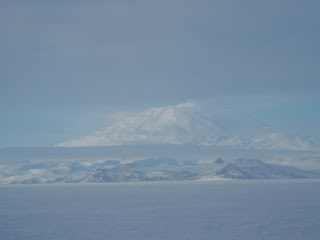 On our way up to MacTown, we pass by several buildings and parking lots. Here is the snowmobile parking lot. 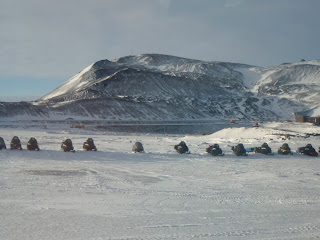 I think this is the fuel station. 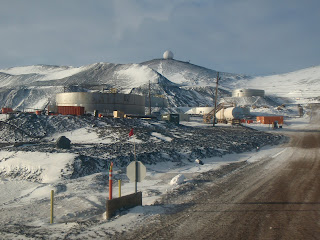 Here is a view looking out from the town. 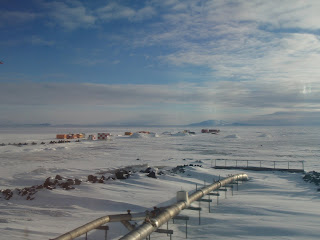 There is tons more to this place, but I have 5 months to take it all in. Just an hour ago I got my luggage and linens. I went up to my dormroom, found 3 beds in there which were all occupied. One extra bed was thrown ontop another persons bed to make a bunkbed, but the top bed is only 6 inches from the ceiling. So tonight I sleep on the ground, with pleasure. Sleep sounds so good right now, but like the last 4 nights sleep is going to be hard to come by. My roomates are morning janitors and I still don't know my shift. It's like being in university all over, except this time I don't have my own private suite nor private room. Tomorrow at 8:00 am we have a kitchen meeting and I've already met Chef Mark, who is an awesome dude. I'd type more but I'm worn and really want to get out to see my first Antarctic sunset. Over and out.