Around 6 PM I met a kitchen pal in the computer room and he told me the secret time to sign up for ice caving this Sunday, recreation keeps the sign-up times random and unposted because there would be such a line up if they did openly broadcast the times. I arrived at the top secret location 15 min. before the door opened, signed up and now I'm good to go. The only prerequisite is that I must attend the Outdoor Safety Lecture (OSL) this Saturday. Then the guy goes, "Want to go to Ross Station for American Night?" Poor Kiwis I thought, they have to put up with a bunch of drunk Americans. Ross Station is the Kiwi (New Zealand) base right near McMurdo. Better buildings, better food, and only 45 people on station. McMurdo on the other hand is a rig-job trailer park with little fresh foods due to the our 50% budget cut and is residence for 815 people, most of whom live in my hole-in-the-wall dormitory. Max. pop. capacity will be 1150 come January. Anyways, I said yes to his offer and right then we got packed up and headed out. This is the road heading to Ross Station. -20 C. winds = 45+ kph. 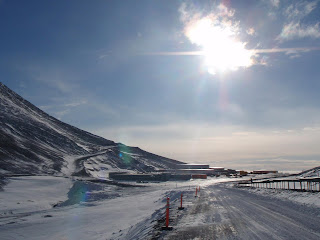 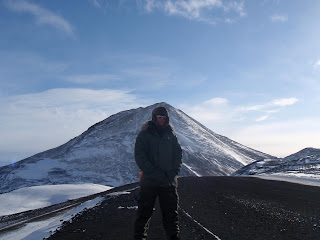 After 20 minutes of hiking, watching the snow drifts and helicopter cruise in the distance we see the Kiwi green station. 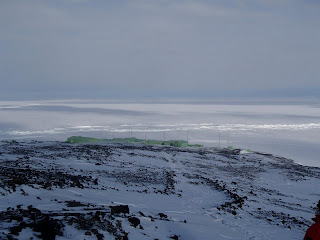 To get to the station we had to hike off the main road onto a sloping trail. The first thing we come to is this sign that reads "Non-Ionizing radiation." I looked to Heyyou (the first thing I called him day 1 in the kitchen, since then that's been his name) and told him that is very reassurring that this is non-ionizing radiation... our DNA is in good hands on this Kiwi base :) Now what about the ozone hole right above our heads? 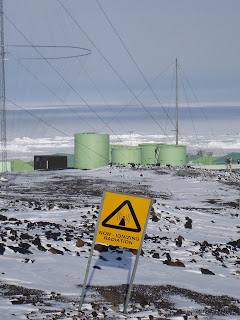 Right beyond the base there was a few seals and a giant uplift in the ice. Two giant ice sheets are colliding together creating this uplift and will get higher as the summer season progresses. Click on theh image to zoom in and you will see the blue ice in the uplift a wee bit better. 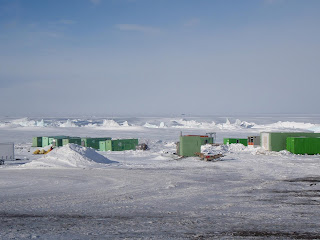 Looking southwards from the station. By the way, you may have noticed by now that about a 1/3 of my photographs are slanted. I'm sorry for that, but living on slopes has really messed up my sense of balance. The only flat ground I walk on is inside the buildings. 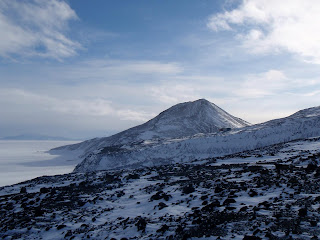 The grand finale of this set, the active volcano Mt. Erebus (3700 meters and probably rising). It 'coughs' about 5 times a day sending out parcels of lava and a few small tremors that we rarely feel at McMurdo. Since it releases it's pressure on a continual basis, just like how I go the gym/sauna on a daily basis to release my internal pressure, it won't ever explode, and I won't ever spontaneously combust. As Grandpa Bill says, better out than in ;) 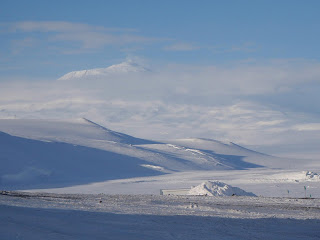