Day 2 in Denver, Orientation at RPSC 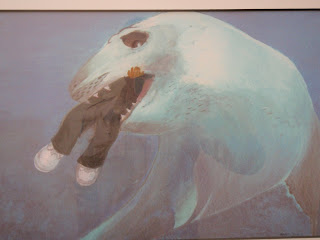 This picture hung on the main hallway at the United States Antarctica Program (USAP) center in Denver, CO with the heading "Intern undertaking studies on the predators of Antarctica."

I awoke bright-eyed and bushy-tailed at 5:30 a.m. from some crazy dreams, got a shower, made a pot of coffee, got dressed in my Alaska State Parks formal button-up shirt that Ranger Gabe gave me and made my way to the hotel shuttle to go to the our RPSC/NANA orientation. Half of the 50-person crew was jacked on coffee, and the other half was yawning and slow from the free alchoholic beverages our hotel offered the night before. The group consists of people with many diverse skills... I met ice camp development supervisors and engineers, construction workers, greenhouse workers, cooks, our executive chef, human resoure personal, electricians, waste management employees, etc. These folks are from all over the U.S. with the majority from Alaska, and about 10% of them are heading to the South Pole.

First step was to get my wristband and some travel funds, then I had to drop my laptop off to get screened at the IT department. When I went to pick it up it had a big red sticker on it saying "Network Access Denied". In other words, my computer cannot go to the Ice unless I remove the trojan they found on it. Now I just ran a deep Norton and McAfee virus/trojan scan and it found nothing. Worst case scenerio I go to the Ice without a laptop, oh well. After that we went through an environmental and safety course.

The lessons of the environmental course were:

(1) Initially the early Antarctic explorers were interested in conquest and not preservation. But, a few decades ago the U.S. scientific community began to see the damages being caused by the increase in use of polluting technologies and population. Today we must be conscience of our destructive potentials.
(2) The Antarctic Conservation Act (ACA-1978) suggests education, waste management, preservation of natural and historic sites, and wildlife protection is the means to go about limiting our destruction to the landscape. The most current themes within the ACA rely upon new technologies that limit our stress on the environment, i.e. using solar/wind farms instead of burning fuels, and developing more aerodynamic snow sleds that increase the efficiency of transportation.
(3) 3.5 million lbs. of waste are created at McMurdo annually, 65% is recycled. All waste is hand categorized by the user into several bins, and then double-checked by the waste management group; roughly 9 people that monitor waste from 1200 people. Almost all waste is shipped back to the U.S. for proper disposal and recycling.
(4) Big emphasis on spill cleanup and response, as well as Environment Impact Assessments (EIA) for any scientific or construction project. Water quality is also closely monitored with frequent testing. McMurdo is currently operating at 2/3s of its water production, thus we are limited to 4 2-minute showers a week, which will save a total of ~288 gallons of water and 2 gallons of gas.
(5) You cannot poop or pee anywhere outside unless you have a special permit. Who would want to anyway when it's -30 F? Ouch.

After the environmental conservation training course I wandered around the halls and spent about a half hour staring at a map of the research bases located throughout the continent. The U.S. and Western World have the majority of their research stations on the Antarctic lands and iceshelves facing N.A./S.A./W.Aus and Russia, China, and Japan have their stations on the opposing side. The U.S. is the only country with a station directly at the magnetic south pole, and Russia is the only country with a station on a extremely high peak on the Transantarctic Mountain chain, in fact that station recorded the coldest natural temperature on Earth a few years ago... -129 F. But, a meteorologist in our group told me that stat cannot be correct, if the air is at -129 it would be so cold and dense that it could only be found in a valley of some sort. So, that Russian mountain station must be representing a stat from a lower altitude station.

It still is amazing that some 46 nations can work together to study Antarctica, without any mineral exploitation or military operations. No matter who constructs a weather station, that data is free to anyone else who has signed the Antartic Treaty. Also, any country has the right to inspect any room, any facility, any boat, any plane, and any station. All property on the continent is public domain, perhaps the nonestablishment of privatization is what creates peaceful operations. One interesting thing that I did hear today was that countries can make territorial claims. Land grabs have historically been the first initiatives that lead to resource exploitation, privatization, injustice, and in some cases war. Let's hope that this is not the case. I think there is no need for territorial claims, instead there needs to be an Antarctic International Peacekeeping (or Protection) Agency (AIPA) that manages how much can be built, what can be done, how many people can visit, and so forth.

Another disturbing fact was that our moderator mentioned tour groups are becomming overwhelmingly more common, and more of an issue to maintaining the quality and environmental integrity of the land/ice/ocean/wildlife. Invasive species now exist that did not exist a decade ago from these tour groups, and now it's up to the research stations to mandate which lands are protected and off-limits. Invasive species have been brought to Anarctica unintentionally from packages, dirty clothing, and muddy boots. Within the last few years the dichotomy of 'unprotected' and 'protected' areas has grown around McMurdo and that's a sign that the collective wild environmental integrity is at stake. If I were in charge, I'd say No to tourism. Tourism has it's benefits (to the global economy for the most part), but it's negative consequences outweigh the positives, i.e. cultural assimilation, wildlife habit changes, spread of invasive species, pollution, and overtrampled lands. Sure you can make a few quick bucks sending 100 folks down on an old military plane to see a few penguins, but the longterm effects causes by the negatives mentioned above are far more costly to fix. Yet, am I hyprocrite in venturing down to the Ice on a plane and using the water? For the shortrun yes, but in the longrun I will do my best to make sure this wild place remains wild... I mean come on, can humanity leave at least one patch of land alone... permanently? If every hectare of wilderness is to become a playground for tourists and development then we've lost our human ability to leave alone what should be left alone. Respect the unknown. Protect the unknown.