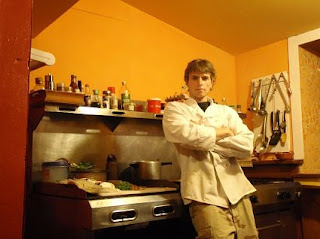 Antarctica, more precisely… McMurdo Station, is where I’m heading to in a few days. To make a long story short, last summer I worked at Shuyak Island, Kodiak, Alaska as a backcountry ranger assistant, graduated in the spring of ‘08 from Trent University (Canada) with a B.Sc. in Physical Geography, journeyed to Monteverde, Costa Rica to operate as an eco-lodge private chef during this summer, randomly came across an Antarctica cooking opportunity and applied for it. After applying for it online I soon left Costa Rica because the rainy season was on it’s way and then had to spend a month at home in Cincinnati, Ohio (a.k.a. Nasti Nati) awaiting the day I can flee, two weeks ago I got the Antarctica offer and today I just arrived in Denver, CO and will attend Raytheon’s initial orientation tomorrow beginning at 7 a.m.

A few nights ago I began digging through blogs from folks who have previously ventured to McMurdo and the South Pole. I instantly got a sense that I was in for a ride… a long, cold and challenging ride. Today I got that confirmation when I talked to a guy sitting next to me in the airport shuttle, he has been to McMurdo for 3 summer seasons and basically said that in the beginning everything is okay, but by Thanksgiving all hell breaks loose. Hmm… Thanksgiving is in like 3 weeks and I haven’t even got to the Ice yet, oh boy.

McMurdo Station is very different than the South Pole station, and it takes experience and skill to get the South Pole, primarily because it’s high above sea level, remote, and the population is much less. My goal: get to the South Pole and stay for a Winter session. Why? I love a challenge, it keeps me alive. Challenges empower our evolution. From what I hear McMurdo is like a university campus. Folks don’t get their own rooms and privacy is something you have to run into the hinterlands to obtain. I love my quiet time, so tonight I sit alone in this Denver hotel room staring outside at the full moon embracing every bit of silence I get. (note: I got the offer on a new moon, and embarked at the Hunter’s Moon). Perhaps the greatest challenge will be having to work 60 hours a week, at varying shifts, simply cutting and thawing foods as a Prep Cook, standing on your feet in one spot for long hours staring at chicken, lettuce, tomatoes, etc., and then having to retreat back to ‘my’ bedroom that will be shared with at least 1, and up to 5 other people, whom may be on totally different shifts than I. Did I mention that we are only allotted 2 minute showers 4 times a week?

There are a few upsides to living and working at McMurdo as a Prep Cook, or perhaps I’m just crazy, but I will disregard that possibility and be optimistic. (1) I will be assisting the front line of international science effots in getting to know a bit more about cosmic rays, geomagnetic storms, sun-earth relationship, etc. (2) There are penguins, somewhere (3) I will learn new culinary skills. (4) I will be on a continent I’ve never been to before (5) The beer is cheap and from New Zealand (6) You can rent a guitar (7) There is a superb gymnasium and awesome hiking/skiing trails nearby the station (8) Lots of parties (9) Girl to Guy ratio is better than that of the S.Pole or Palmer, roughly 1 girl to every 3 guys (10) I don't have to be attached with the drama of the interior U.S., or that of the rest of the World, welcome to that last terrestrial frontier on Earth :)

I learned from previous bloggers lessons of cooking at the McMurdo, and in reciprocity I will share my words and photos to assist the future penquin-seekers. Let the games begin. 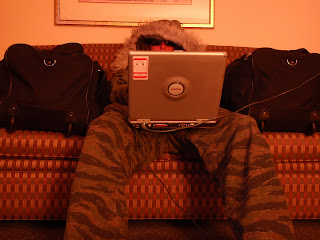